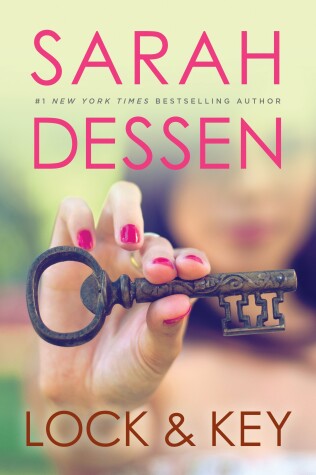 Ruby is used to taking care of herself.

But now that she’s living with her sister, she’s got her own room, she’s going to a good school, and her future looks bright.

Plus there’s the adorable boy next door.

Can Ruby learn to open her heart and let him in?

As with any Sarah Dessen novel, I was extremely invested in the world of Lock and Key, with it's heavy focus on character development and nuanced portrayal of relationships. However, I found that this novel was one where I didn't care much for the protagonist, and ended up being much more fascinated with the secondary characters of Cora and Jamie, Ruby's estranged older sister and brother-in-law who take her in after she is abandoned by her mother.

In many ways, it's understandable why Ruby's flawed in the ways that she is, having lived with a mother who has declined in maturity and responsibility the older she becomes, raising Ruby in cramped apartments and nearly dilapidated houses, seemingly always on the run from creditors and landlords, unable to hold down a steady job. It's easy to see how Ruby becomes fiercely independent, stubbornly closed off, and prone to believing her future is, at best, a high school diploma and a minimum wage job. While I still struggled to read about the choices Ruby made, I loved reading about her being reunited with her older sister, who has come from the same background as Ruby but has risen above her circumstances. Cora was the character I was able to read about, from her slowly unraveling the truth of the past to Ruby about their parents to teaching Ruby that it's OK to be vulnerable, to allow yourself to want and to love, even when it's hard. It's a fragile yet rewarding bond of sisterhood, and I would expect nothing less from Sarah Dessen

However, despite my interest in Ruby and Cora's relationship, I felt that this book dragged a bit in the middle and could have been shorter while still delivering the same impact. This story also seems like it finishes more open ended than some of Dessen's other novels.

Overall: I enjoyed this novel because of the reasons I enjoy ALL of Sarah's novels: the great character writing, the relationship dynamics, the focus on imperfect families and self-discovery. However this story wasn't one that was particularly memorable against some of Dessen's stronger works. This review was originally posted on Girl in the Pages
I really just did not like the storyline. It was written well enough though.

It's a lot easier to be lost than found. It's the reason we're always searching and rarely discovered - so many locks, not enough keys." (Ruby Cooper)


I wasn't interested in reading this book. I put it off for months, weeks, until finally I forced myself to read it. As soon as I started, I flew through it. It's always the books that you expect the least from that end up surprising you the most. Lock and Key was an amazing read!

The synopsis of Lock and Key is extremely misleading. I thought that this book was going to be about falling for the boy next door (and to an extent - it was), however tough issues are dealt with, mainly abandonment and abuse.

One day, Ruby's mom abandons her and Ruby is left to fend for herself. However, her landlords find out about it. Ruby is sent to live with her sister, Cora, who she hasn't spoken to in years and her brother-in-law, Jamie.

"It's never something huge that changes everything, but instead the tiniest of details, irrevocably tweaking the balance of the universe while you're busy focusing on the big picture. (Ruby Cooper)

The characters in Lock and Key are amazing. Ruby starts off as being a cynical, self-interested scarred character and her growth and development is extremely heartwarming. Nate is the perfect, rich kids and the layers of his perfect life are stripped away to reveal something deeper. Cora, Ruby's sister started off as an unlikable character who I eventually grew to love. Jamie, Cora's husband, was one of those perfect kind of guys and he was such a cool character. The other secondary characters, Olivia, Gervais, Harriet, Reggie and Heather were great and quirky characters. I loved that most of the characters in Lock and Key weren't stereotypical cardboard-cut-outs nor were most of them perfect. The perfect love interest isn't flawless, the queen bee isn't a meanie and the main character doesn't always make the right decisions, but because of ALL of these factors, I grew to love them.

I also loved that Lock and Key focuses on family. What is family? What does it mean to someone whose mother has abandoned her? Along with this is an amazing sister-bonding relationship that I wanted more emphasis to be placed on. However, I found the fact that this book didn't deal with the abuse and abandonment itself, but dealt with the aftereffects from those events, refreshing and an interesting angle to read from. I was also extremely grateful for the lack of romance, even although it was there, because there was more focus on Ruby and her life and the much needed fact that being in a relationship doesn't make everything better.

However, I felt hopeful at the way this book ended, but I didn't believe it. Everything ended way too "happily ever after" like the little ribbon were wrapped up a little too nicely and I just couldn't believe the rainbows and unicorns and sunsets, no matter how hard I tried.

Sarah Dessen is the one of my contemporary queens. Yes, I have only read two books of hers, but she hasn't disappointed me (and she won't disappoint me because she IS queen). Lock and Key not only proved that Dessen is queen, but it dealt with issues of abandonment and abuse, had amazing character growth along with characters that I couldn't help but love.

I really enjoyed the family dynamics in LOCK AND KEY by Sarah Dessen. Primarily, this is more what the book is about rather than a contemporary romance. I really liked how Ruby came to adjust to her new life with Cora and Jamie.
The romance in LOCK AND KEY isn’t particularly exciting. I liked how the relationship between Ruby and Nate developed from a friendship, but I wish it kind of stayed that way. They had good friend chemistry, but I felt indifferent to the two of them as a couple.
LOCK AND KEY was enjoyable to listen to, but it was not a compelling read for me. I don’t think it has much to do with the book as much as it has to do with the genre in general. I just find contemporary audiobooks to be less compelling as a whole than other genres. The plots do not hook me enough to sustain my attention. I never felt the pull to just listen to LOCK AND KEY until I finished.