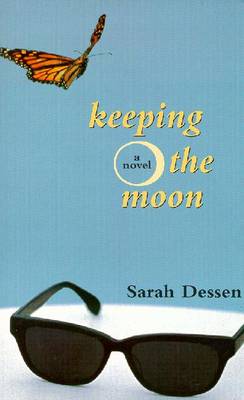 Fifteen-year-old Colie, a former fat girl, spends the summer working as a waitress in a beachside restaurant, staying with her overweight and eccentric Aunt Mira, and trying to explore her sense of self.

That's it? It felt short and unfinished. I didn't really connect with the characters.

Blog | Instagram | Twitter | Facebook | Pinterest | Youtube
I have read Sarah Dessen's book all out of order. I wish I had read them according the publication date, because although they are stand-alones, she will incorporate places and people from previous books. This book is set in Colby, the quaint seaside town that have previously visited in one of my favorite Dessen books, Along for the Ride. Colie was spending her summer with her Aunt Mira, the local eccentric, while her mother, a fitness guru, was on a promotional tour of Europe.

In my opinion, this is a coming of age story. Colie had gone through a physical metamorphosis, but she was still that friendless, overweight girl. After shedding the weight, she wrapped herself in black, pierced her lip, and immersed herself in angry music. In Colby, she grew and changed. Again, the changes began as physical changes. Isobel changed her hair, plucked her brows, put some makeup on Colie, but over time, her mindset began to change as well. She was able to see the girl who had been there the whole time, and Colie finally was inspired enough to come to the surface.

This girl who stared back at me, with her lip ring and her half smile - not quite earned- knew she wasn't like the others. She knew a secret. And she'd clicked her heels three times to find her way home.

As always, Dessen gave us a story that was balanced with drama, fun, romance, and lots and lots of friendship. There were some great characters too. From the very abrasive, but totally loving Isobel to the wacky but well adjusted Aunt Mira, I found all the characters contributed an important part in Colie's story. The friendship between Morgan and Isobel was very honest. It wasn't perfect, but the friendship was still very strong. Isobel was brutal in her honesty, and although it hurt her to reveal certain truths to Morgan, she did it out of love. They also accepted each other, imperfections and all, and were there for each other with just the right CD and an impromptu dance party.

I've always known who I am. I might not work perfectly, or be like them, but that's okay. I know I work in my own way.

As with most contemporaries, it just has that sort of fade out ending. There is no peek at what the future holds for any of the characters, and that always makes me nuts. I guess I have come to accept this from contemporaries, and I will continue to write my own endings in my head.

Another solid Dessen book with lots of great lessons about loving and believing in yourself.
This is one of the very few Dessen books that I haven’t read yet and I finally picked it up last week. While it wasn’t my favorite Dessen book, it was still a very charming read.

This book follows Colie, who used to be fat as she spends the summer with her crazy Aunt Mira in the town we’ve all come to love through Sarah Dessen books, Colby. Colie is used to being bullied as she’s been bullied all of her life at school and because of this, she doesn’t let very many people close to keep from getting hurt when they inevitably do. The summer in Colby changes Colie for the better and as much as she drove me crazy through the book, I was so glad when I finally finished the book because there was growth and there were lessons learned and a boy that I came to adore throughout the entire book.

Colie’s Mom is a fitness guru who used to be big and transformed her and Colie’s life with a diet and exercise plan that changed their lives and made her an instant success story. Colie and her Mom used to live out of their car at times, move around all the time and that kind of lifestyle didn’t really help one stay healthy and so Colie and her mother were overweight for a good portion of Colie’s life and now that they’ve taken control of their health, they’re no longer big girls and yet Colie still doesn’t have the confidence in herself and in her looks the way that one would think after shedding so much weight.

Colie is distant and she’s reserved and for good reason. She’s been through things that I wouldn’t wish anyone to go through and my heart hurt for Colie as I got to know her because there were reasons for the way that she was and when she started to step out of her comfort zone and let others into her life, I cheered because she deserved the very best that life had to offer her and she shied away from everything because of the way that her peers treated her at school. She learned some very hard lessons early on in life and those lessons stayed with her and I loved when Isabelle and Morgan came into her life. I loved that they were older and wiser and were there when Colie most needed her. They were there to help her blossom into the young woman at the end of the book and boy did I really enjoy the way that they stepped into her life and made her accept them and then in turn, accepted her.

There were times when the story dragged a bit but it didn’t last very long. Leave to Sarah Dessen to write a complex story about one character with not much happening…and yet so much happening. I adore Dessen’s books and this was another winner for me. Great story.
3.5 stars