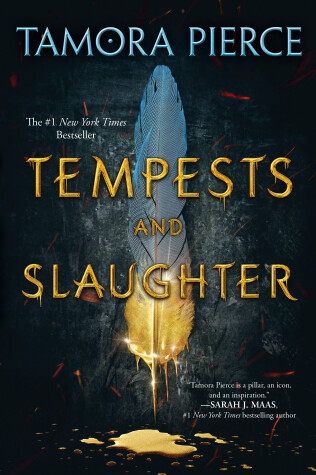 This must-read fantasy from an author who is legend herself--Tamora Pierce--is one Bustle calls "the perfect book for die-hard Pierce fans and newcomers alike."

Discover the origin story of one of the realm's most powerful mages in the first book in the Numair Chronicles.

Arram Draper is on the path to becoming one of the realm's most powerful mages. The youngest student in his class at the Imperial University of Carthak, he has a Gift with unlimited potential for greatness--and for attracting trouble. At his side are his two best friends: Varice, a clever girl with an often-overlooked talent, and Ozorne, the "leftover prince" with secret ambitions. Together, these three friends forge a bond that will one day shape kingdoms. And as Ozorne gets closer to the throne and Varice gets closer to Arram's heart, Arram realizes that one day--soon--he will have to decide where his loyalties truly lie.

In the Numair Chronicles, readers will be rewarded with the never-before-told story of how Numair Salmalín came to Tortall. Newcomers will discover a YA fantasy where a kingdom's future rests on the shoulders of a talented young man with a knack for making vicious enemies.

"Tamora Pierce is one of the queens of fantasy, and as a fan of the Immortals series most of all, I was happy to be reunited with the world of Tortall and literary crush Numair Salmalín." --The Mary Sue

First, I must confess my shame: I have never before read Tamora Pierce (that I remember). There. I've said it. Let the public flogging begin. However, I feel that this book is an excellent introduction, and certainly gives me the larger desire to read more. The three main characters were interesting, and (without spoilers), by the end it was possible to see that conflict may be coming. The instructors at their school have their own quirks and personalities, and I do hope that they are either in the second book, or at least make occasional appearances! Other than Chioke. HIM I could do without. The Gods are...like us. Capricious and pushy and sometimes even amusing. Also? Preet.

The story was entertaining and, in parts, very moving. There is a lot of discussion about slavery, and what it means in terms of the pain of those slaves (who were also gladiators, so....early and painful deaths), but also in terms of the government. There is also some discussion about sexism, and there is even an instructor who is married to another male. And yet, with all of this potentially heavy and story-killing themes, the story is lifted rather than drowned. Pierce truly is a master - and I look forward to not only the sequel, but to reading more of her works and atoning for my slacking.
★★★★☆
The Imperial University of Carthak is a prestigious school, educating the brightest adolescent Mages throughout the kingdom, including promising young mage Arram Draper, the ten year old son of a thread merchant. Mages are a revered member of the community, educated in the artistry of healing, spell casting and the combative arts. Arram Draper is an intelligent, gentle young boy and an advanced learning academic of The Imperial University of Carthak.

Prince Ozorne is an interesting character and although charismatic, isolates himself from his peers at university. Beneath the debonair facade is a volatile and passive aggressive young man, his despair exoneration for the threatening and abusive behaviour towards friends and acquaintances.

Varice Kingsford is a wonderful young woman, a culinary artiste despite the displeasure of her family. Established friends Varice and Ozorne welcome Arram to the independent learning program where he will receive private tuition in each discipline.

In a kingdom where slavery is celebrated in the gladiator area, the Sirajit revolutionaries oppose the barbarism of the royal family, Prince Ozorne's father slain during the uprising and his son determined to avenge his father. Encouraged by his mother, Princess Mahira, Varice and Arram are concerned for Ozorne, the Emperor's nephew now second heir to the Emperor throne. Arram is introduced to the gladiator arena when rescued by Musenda, Gladiator and slave. Under the Carthak empire, slaves are imprisoned to serve nobility or destined for the arena where death is inevitable. Musenda is a gentle, compassionate man, financially supporting his widowed sister and her two children on the arena. Arram has seen the despair, the hunger of enslavement and the life threatening wounds throughout his placement as an apprentice medic, believing in freedom against slavery and a prosperous Kingdom.

Carthak is atmospheric and meticulously illustrated. The linear narrative traverses several years throughout Arram's education, as he begins to specialise in healing. Throughout his interactions with each discipline Master, Arram learns humility, compassion and the atrocities of slavery within the Kingdom.

Tamora Pierce is an esteemed and accomplished fantasy author, exploring a world enduring exploitation and injustice, revenge and slavery. Racially and sexually diverse characters epitomise a vibrant origin story of gallantry and valour. Thoroughly enjoyed it.