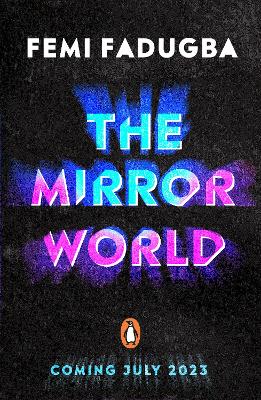 The electrifying sequel to the bestselling, critically acclaimed page-turning thriller, The Upper World.

'A time-twisting, mind-bending thrill ride . . . I loved it!' - Holly Jackson, bestselling author of A Good Girl's Guide to Murder (on The Upper World)

In The Mirror World, we return to Esso and Rhia's epic story as they learn more about The Upper World. Soon they discover they are not the only ones who can wield its power, and there is danger coming at them from past and present . . .


NOW: With her mentor, Dr. Esso, by her side, eighteen-year-old Rhia is determined to make her mark on the hallowed halls of Oxford University. But the power of the Upper World is becoming an addiction she can't shake. Even worse, she's not alone. Someone else knows the secrets of the Upper World. And he's come to eliminate his newest rival: Rhia.


THEN: In 1990s Benin, Serou believes he's destined to inherit the powers of the Upper World. But instead of being welcomed into his temple as a young adept, he is exiled-only to uncover a conspiracy that has sacrificed dozens of kids like him so one man can stay in power. In his quest for justice, Serou faces a deadly crossroads: a choice that could break the cycle of violence . . . or send him down the same path.

Praise for The Upper World:

'Impossible to put down' - The Independent

'A thrilling, electric book - so sharp and quick, so witty and wise it leaves you gasping.' ? Katherine Rundell

'Ambitious and highly addictive' - The Bookseller

'An astoundingly impressive debut. Thought-provoking, thrilling, funny, and brilliant in every sense of the word.' ? Katherine Webber