A Kingdom of Flesh and Fire (Blood and Ash, #2) 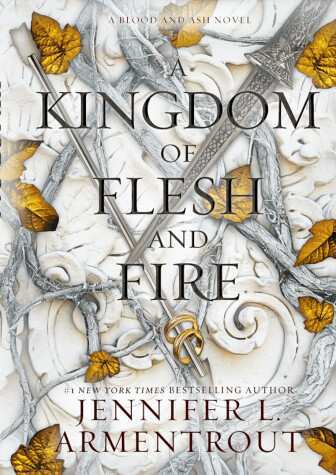 A Kingdom of Flesh and Fire (Blood and Ash, #2)

Everything Poppy has ever believed in is a lie, including the man she was falling in love with. Thrust among those who see her as a symbol of a monstrous kingdom, she barely knows who she is without the veil of the Maiden. But what she does know is that nothing is as dangerous to her as him. The Dark One. The Prince of Atlantia. He wants her to fight him, and that’s one order she’s more than happy to obey. He may have taken her, but he will never have her.

Casteel Da’Neer is known by many names and many faces. His lies are as seductive as his touch. His truths as sensual as his bite. Poppy knows better than to trust him. He needs her alive, healthy, and whole to achieve his goals. But he’s the only way for her to get what she wants—to find her brother Ian and see for herself if he has become a soulless Ascended. Working with Casteel instead of against him presents its own risks. He still tempts her with every breath, offering up all she’s ever wanted. Casteel has plans for her. Ones that could expose her to unimaginable pleasure and unfathomable pain. Plans that will force her to look beyond everything she thought she knew about herself—about him. Plans that could bind their lives together in unexpected ways that neither kingdom is prepared for. And she’s far too reckless, too hungry, to resist the temptation.

But unrest has grown in Atlantia as they await the return of their Prince. Whispers of war have become stronger, and Poppy is at the very heart of it all. The King wants to use her to send a message. The Descenters want her dead. The wolven are growing more unpredictable. And as her abilities to feel pain and emotion begin to grow and strengthen, the Atlantians start to fear her. Dark secrets are at play, ones steeped in the blood-drenched sins of two kingdoms that would do anything to keep the truth hidden. But when the earth begins to shake, and the skies start to bleed, it may already be too late.

4,5 ⭐️
What?????
There is quite a lot of sex in this book. Not sure why Casteal is leader of the Wolven but not a Wolven. Would think very carefully before putting this in a school library...I wouldn't...Also issues about coercion and exploitation and how these are presented.
The tale picks up exactly where From Blood and Ash ended. It is imperative that you read/listen to this series in order.

Casteel “Hawke” Da’Neer (The Dark One & Prince of Atlantia) is holding Poppy the Handmaiden in a keep filled with his people and deserts. It is here he announces he will wed Poppy. I adored the back-and-forth banter, and the inner struggle Poppy has as she begins to more fully understand the world, the lies and the betrayals.. but Hawke and his many faces keep her safe. Right?

Filled with vampires, weres, elementals and sleeping gods, this story is completely addictive. There is a reason the Ascended come hunting for the Maiden, because Poppy is so much more than an empathy.

Battles, loss, history and the most delicious romance await you in this saga. I loved traveling and learning more about Cas, Atlantia, and Poppy’s powers. From the mist to the nail-biting, jaw dropping cliffhanger of an ending, it enthralled me.

While Poppy may have self-doubts and she struggles to accept truth, both worldly and her own she is fearless, selfless and a force to be reckoned with. Cas/Hawke is a swoon-worthy scarred hero who doesn’t feel himself worthy of happiness, and I adored him.

Stina Nielsen rocked the narration. Her voices expressed emotions, tone and helped set the tone throughout the story. She has become the voice of Cas and Poppy. The story itself is delightful on audio and added a layer of enjoyment. This review was originally posted at Caffeinated Reviewer

Casteel and Poppy come to an uneasy alliance in this action packed steamy fantasy romance.

Much like From Blood to Ash, this book starts off rather slow and exposition heavy. Poppy has lots of long talks with Casteel and the other members of his party as she learns more about the conflict between the Ascended and Atlantia. Time is well spent fleshing out the mythology and religion in the world, although the politics remain a bit murky.

Finally, the ending. THE ENDING WILL KILL YOU. It sure as hell killed me. I stayed up until midnight devouring this book (considering my bedtime is 9 p.m. on the dot that’s saying something), and I was floored once it was done. I have, as Poppy would say, SO MANY QUESTIONS. I think this is the only time I will say I hope the third book actually starts with lots of exposition so I can devour it.

tl;dr This book kept me up well into the night with an action packed plot and a very steamy unforgettable romance.

This really had the potential to be a 5-star book for me, but oh my god… the bickering! It was supposed to be cute, but it just grated on me. I was so sick of them pretending to hate each other and pointlessly contradict each other. It drove me nuts.

But I really liked the story and the mystery behind Poppy's past. Other than annoyingly not accepting her feelings, Poppy is a great character. I'm really looking forward to the next book!

I AM SO DOWN FOR THE JOINING IN BOOK 3, kthnx
;screams;
I hate second books normally but I love this fucking book with all MY WHOLE ASS HEART.
That’s it. That’s my review.
If you don’t rate this book 5 stars you are WRONG and no this cannot be discussed. It is fact.
WHAT THE HELL?!?!
Jennifer really knows how to end on a cliffhanger, another amazing book I swear they just get better and better havent come across a book I havent like yet.
Seriously everyone needs to read this series.
Humour action flirting and stabbing what more do you need.
P.s im in love Kieran