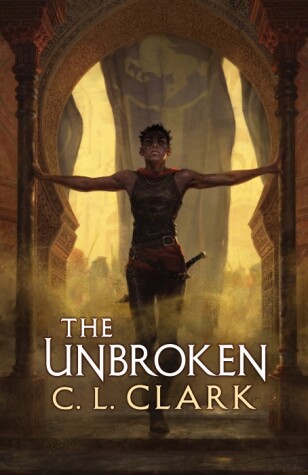 In a political fantasy unlike any other, debut author C. L. Clark spins an epic tale of rebellion, espionage, and military might on the far outreaches of a crumbling desert empire.

Touraine is a soldier. Stolen as a child and raised to kill and die for the empire, her only loyalty is to her fellow conscripts. But now, her company has been sent back to her homeland to stop a rebellion, and the ties of blood may be stronger than she thought.

Luca needs a turncoat. Someone desperate enough to tiptoe the bayonet’s edge between treason and orders. Someone who can sway the rebels toward peace, while Luca focuses on what really matters: getting her uncle off her throne.

Through assassinations and massacres, in bedrooms and war rooms, Touraine and Luca will haggle over the price of a nation. But some things aren’t for sale.

Thank you to Orbit books and Netgalley for providing me with The Unbroken in exchange for my honest opinion. This book is available for purchase now.

This is going to be a tough one for me to talk about. While I really appreciated certain aspects of The Unbroken, I ultimately didn’t love it as much as I was hoping. The hype for this book was high, which probably unfairly raised my expectations.

Touraine is a soldier in the army of Balladaire (The “Sands” army). She didn’t sign up for the job; rather, she was forced in as a child. These child armies are raised with the teachings that their fight is a noble one and all violence will ultimately be justified. It’s really hard to think about because there are really situations of this happening in the real world. This added an extra weight to the situation that both intrigued and saddened me.

Luca is a princess of Balladaire. She ends up going to try to stop a rebellion and prove to her uncle, the regent, that she is worthy of ruling Balladaire. Like many power grubbers, her uncle is reluctant to relinquish any control. Touraine and Luca become intertwined when an assassination attempt on Luca’s life is stopped by Touraine, leaving Luca in her debt, so to speak. There’s more to the “how it got there”, but Touraine ends up being Luca’s spy/representative.

The Unbroken is a political fantasy, a slower-burn that shows the ramifications of decisions on every side. This sort of book requires commitment from the reader, simply because there is so much to pay attention to. The setup was a fascinating one, exploring themes of colonialism and how it affects everyone involved. It is not the sort of story I’ve really ever seen in fantasy before.

I struggled to pay attention during the first bit of The Unbroken, to be honest. I disliked both the main characters, which made it tough. I mean, I really disliked them. I think that was intended by the author. If so, consider the mission accomplished. I don’t mind disliking characters at all. I don’t need to “connect” to a character to enjoy reading them. My problem was that the characters often made decisions that seemed very much the opposite of what they would do based on what the author has told the reader about them. It made it very difficult to understand who these characters are on a fundamental level.

The pacing seemed a little off from time to time. However, while I had a hard time becoming invested at the beginning of the book, the second part picked up and became much more interesting. The Unbroken made me think. It kept me guessing. It showed me the ugliness that often shows up if a person so much as scrapes the surface of a situation. This wasn’t what I would call a “comfortable” book, but I definitely think it is absorbing.

This met all of my expectations. It was brilliant. ♥️

C.L. Clark is back with another brilliant fantasy! The Unbroken is a novel that I've heard so much about it lately. Fortunately, it's also the first in a series (Magic of the Lost), so this is not the last we'll be seeing of these characters.

Touraine was not born to be a soldier – but she was raised to be one. She was taken as a child and forced to work her way through the ranks. Now, she's been sent back to the very land she was stolen from – and she's going to have to make a choice.

Then there's Luca. She's in need of a spy willing to cross the line, take risks, and in general, ignore concepts such as treason. What she needs is a rebel. And it's looking like Touraine may fit that bill.

“Stupid, stupid. Instinct alone saved her life. She lifted her arms just in time to get a slice across her left forearm instead of her throat.”

Guys, there is so much to love about The Unbroken. It is a fierce and compelling tale – one that will tug at your heartstrings one moment and throw you into the center of the action the next. Needless to say, I loved it.

This is probably not the best book to read if you're looking for something bright and happy. The Unbroken is incredibly bleak at times – but that just makes other moments shine all the brighter. It's a fine balance and one that C.L. Clark found.

I think that it wasn't until I was a third of the way in that I found myself getting truly emotionally invested in the story. Don't get me wrong – the horrible things happening in this book were still hitting hard (perhaps too hard). But it wasn't until I started rooting for the characters that it felt more intense and real.

I love how much was fit into The Unbroken. It's fantasy and a little bit science fiction. It's got action, world-building, character development, and did I mention that it's GLBT? I love it so much, and I sincerely cannot wait to hear news of the sequel.

Thanks to Orbit and #NetGalley for making this book available for review. All opinions expressed are my own.

Magic of the Lost (2 books)