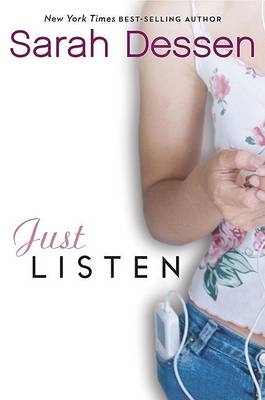 A New York Times bestseller
To find the truth you've got to be willing to hear it.
When she's modeling, Annabel is the picture of perfection.
But her real life is far from perfect.
Fortunately, she's got Owen. He's intense, music-obsessed, and dedicated to always telling the truth.
And most of all, he's determined to make Annabel happy. . .
"This is young adult fiction at its best." --School Library Journal
Also by Sarah Dessen:
Along for the Ride
Dreamland
Keeping the Moon
Lock and Key
The Moon and More
Someone Like You
That Summer
This Lullaby
The Truth About Forever
What Happened to Goodbye

Rating: 4.5 stars rounded up, because I love Sarah Dessen

I am a Dessen fan, and as always, I love the way she explores so many issues in this book. She touches upon: sexual assault, eating disorders, depression, anger management, toxic friendships, and family dynamics. I really adored Owen. His honesty and his ability to embrace his "program", made him one of the most interesting characters in this book. I loved when he would expound the virtues of proper communication (which was reinforced by Kirsten, Annabel's eldest sister), and also, discuss the importance of doing the best you can, day-by-day.

Dessen's books always have just the right amount of heavy drama to keep it interesting, but not to overwhelm. And, Dessen fans are always rewarded with those throwbacks to past books (hello Dexter, Remy). Another great Dessen read.

I'm no stranger to Sarah Dessen novels. Back in my much younger teen years, I devoured Sarah's first seven novels, chronically checking them out from my local library every summer. The release of Saint Anything had me nostalgic for Sarah's quietly profound contemporaries, and within one week I aquired three of her novels, fully intending to make my way through as many as possible this summer.

It's probably been 8+ years since I had read Just Listen, long before I started blogging, and my main memories of the book were that 1) I adored it and 2) The glass house. Upon my reread, I was thrilled to discover it held the same magic it did when I was younger and I enjoyed it even more a second time around (I bumped it from my original 4 star rating to a 5 star rating).

Just Listen focuses on Annabel, a junior in high school and local model who can be summed up in one word: nice. The book begins at the beginning of the school year after a falling out the previous spring with practically all of her friends, and the book follows Annabel as the silence of her social isolation starts to unravel the truth about what happened. She meets Owen, a loner more by choice than by consequence, and his obsession with listening, whether it be to music or the truth, forces Annabel to not only fill her life with sound again, but confront those unbearable moments of silence with her own truth that she's buried. Paralleled with Annabel's journey is that of her sister Whitney, home trying to recover from a severe eating disorder. Sarah weaves both sisters' tragedies and triumphs into a seamless narrative.

I feel like reading it in my twenties made it resonate even more with me, as I have more life experience under my belt and could find different aspects of each of the three sisters I could relate too. I read with older and more aware eyes the toxic friendships that Annabel had formed, and her quiet strength in finally acknowledging her role in them. I watched as "kindness" (the term most used by others to describe Annabel) both endeared and endangered Annabel throughout the novel. I applauded Owen's uncomfortable, but effective honesty. Perhaps what I valued most in this novel, rereading it post-college rather than in the middle of the hot mess that is high school for most, is those quiet moments of reflection that Sarah is so good at, that evoke feelings so profound precisely because they resonate on such a quiet, personal level. Whether it was Annabel looking into the eyes of a former friend and having the strength to admit to herself what happened, or Whitney telling a simple story in a coffee shop, the moments that pack the most emotional punch are some of the quietest in the plot, which made me feel the revelations on a more personal level, as if the characters were revealing these moments to me and me only.

“There comes a time when the world gets quiet and the only thing left is your own heart. So you'd better learn the sound of it. Otherwise you'll never understand what it's saying.”

Sarah also gives peripheral peaks into the lives of secondary characters that leave me craving to know more. More about Sophie's anger, Clarke's confidence, Whitney's body image. Annabel is the connecting thread between all of the secondary characters, but each of them tugs at the reader with their own stories that fall behind Annabel's plot but feel as though they truly exist-and matter- despite never being fully fleshed out in the pages of Sarah's book. In true Sarah Dessen fashion, she makes me as enamored (maybe even more so) with her supporting cast as she does with her protagonist.

Overall: Just Listen is, appropriately, a quiet book. It deals with so many issues (eating disorders, anger management, assault, modeling, body image, bullying, etc) without using them as a crutch to carry along the plot; rather they function quietly to build a story that is profound without screaming about its importance. It's well balanced in handling as many issues as it tackles, and weaves together several deeper stories that all coincide with Annabel as the catalyst. Despite it being a back list release (it's almost ten years old) it never feels dated, and is timeless in the issues it addresses and the stories it seeks to tell. Just Listen is at the top of my list of YA contemporaries that I would recommend to anyone, because the themes are so varied and yet so universal at the same time: Sometimes the hardest, and most important, person to stop and really listen to is yourself.

Sarah Dessen is known in young adult circles for her contemporary stories that address the tougher side of teen life. I have a friend that almost exclusively reads her books (she's not a reader), so I pretty much associate them with each other. Because of this friend, I developed a sort of attitude about Dessen's books despite never having read one. Basically, I deemed them fluff and had no interest.

Looking to expand my horizons, I picked up a copy of Just Listen at the used bookstore one day. I didn't even know what it was about - I figured I had heard of it, so there was a good chance it was one of Dessen's bestsellers, a.k.a. more enjoyable. I promptly put it on my to-read shelf and forgot about it. It was contemporary; no way I was going to jump right on that one. Last week, however, I found myself without my wisdom teeth and without anything to do. My eyes scanned my ever-growing to-read shelf, finally stopping on Just Listen. The day had come.

Just Listen follows Annabel Greene, local commercial model and high school student, as she starts off another school year. This school year is markedly different in that she has lost all of her friends and had spent the entire summer in isolation. Throughout the course of the novel, we learn exactly why that is and how she responds to it during the year.

I literally read this starting at 8pm one night and finished by 11am the next morning (with a break for sleep). It wasn't because the writing was amazing or the story was riveting. I just really wanted to know what happened, and now. There are hundreds of books out there that address exactly the same topics but this one just got me. I wormed my way out of high school exactly 3 years ago, but somehow Dessen drew me back in. Not so dissimilar to The Boyfriend List. I felt Annabel's pain each time she was confronted by Sophie. I felt the olive branch being extended by Clarke. I felt the comfort of Owen's hand. I felt the helplessness of watching her sister Whitney. I wasn't truly absorbed in the story, but the emotion got to me. When Annabel told her family what happened, and she described her family's reactions, I felt a little pang in my heart.

I loved Mallory. She was so full of spirit, especially when she had her faux modeling shoot. Whitney was also a great, somber character without really saying much. Emily was both tragic and brave; the fashion show was a great moment for her. Sophie was such a bitch that when she turned on Annabel, it felt so right for her character. A lot of the female characters were pretty strong in their own right, albeit one-sided.

Of course this novel does have it's problems. There was a lot going on in Annabel's life and sometimes it was hard to keep track of what she was doing or when it was occurring. The role Owen played in her life seemed to make her out as helpless, which I guess at first she did act like it. Owen is better described as a catalyst rather than someone doing all the work. There was a lot of music mentioned, which made me wonder about their connection seeing as they hardly talk about anything else. I was kind of disappointed we never heard more about Sophie at the end, but maybe that's for the better.

Summary
Expectations were shattered by this surprisingly thoughtful novel. A relatable protagonist, vivid characters, a few interesting subplots, and a light romance. Though my curiosity for Dessen's novels has been satisfied and I won't be seeking out others, that shouldn't stop anyone else.

I find a lot of Sarah Dessen’s books are basically the same, but for some reason I never get tired of them. I find this book really makes you think. About yourself and your life. Even though this was a pretty cheesy, expected book I still enjoyed reading it. I can’t even tell you why I liked it. Maybe because it made me keep reading even though it wasn’t the greatest book I’ve ever read. This book has some really great morals in it and I think every teen girl should read it and learn. I’m making this seem like and inspirational book or something but it’s not. the book has a good plot and some really likeable characters. I like how descriptive the author is when she’s talking about a place or an object. She’s got a very unique style of writing. I’m not usually a romance fan, but I read everything that comes out by this author.

I think that if you’ve got a chance, read this book.