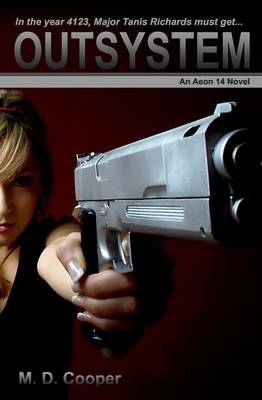 If you enjoy space operas and kick ass females then Outsystem is the book to grab!

Outsystem is a quickly paced thrilling ride that follows Major Tanis Richards as she takes over the military security of the Intrepid, a ship bound to lead the Sol system for a new colony. This is a future were very things are not possible. We have people who are practically immortal thanks to surgeries and cybernetics, and cosmetic surgery so drastic that some no longer even look human. It’s a future where the only limits are those set by your own morals, and it’s kind of cool. Some of the tech is really out there and I really love that it’s advanced to the point of allowing absolute biological freedom. I also love seeing AI being used, not just as ‘servants’ but as fully “independent” AI that works more as partners.

Tanis Richards is all kinds of a badass. When the book starts out she already has a history within this universe and a reputation for being someone who can get things done even if the means sometimes outshine the ends. Admittedly she is a bit stiff and lacking in personal connections, but I forgave it because it’s a legitimate decision that she has made and we do see that change over the course of the story though slowly. The only times we see her really let loose are in combat situations, and she is fairly sarcastic which is always a plus. Angela is Tanis’ AI, and she’s like a sassy and more opinionated version of Jiminy Cricket. I really like the pair these two make, and it almost makes me wish I had an AI to make rude quips when I do something stupid.

This turned out to be an excellent story for audio, and the narrator Khristine Hvam was fantastic. She really captured Tanis and Angela’s personalities perfectly.

I’m looking forward to diving into the rest of this series in the future and other books that M.D. Cooper has written!