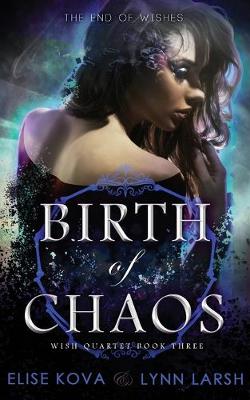 She vowed to bring about an end to the Society. But it may destroy her first.

The Society can’t seem to catch a break and Jo has had enough of it. She can destroy anything with her magic. So why not the Society itself?

Her pursuit of freedom has Jo questioning everything from what the Society really is, to how it was formed, and what does she really feel for their mysterious leader? With the unexpected help of an android serial killer and the silence of her fellow teammates, she’ll get her answers. But Jo is not be prepared for what she learns.

As her relationship with Snow deepens from the truth finally being revealed, so too does her worry for the fates of all those she loves.

When you’re the key to bringing about the end of the world, nowhere is safe.

Birth of Chaos is the third book in a joint venture between Elise Kova and Lynn Larsh. The intensity really ramps up in this third installment i was reading this on the treadmill at the gym doing a brisk pace but i was sucked in so intensely that i had not noticed the treadmill had switched to cool down mode.

The steamy intensity is ramped up to a ten between our would be lovers Jo and Snow. I think my favorite part of this third book is really we get into the meat of how Jo, Pan and Snow are connected along with the whole society. The authors do a fantastical job of painting Pan on point with a delicious drip of complex evilness that i almost can’t hate her as she play her part so well.

The ending transistions nicely into a new time from what has transpired and love the peak we are getting at how this new age will be vastly different from what we have seen in the previous books. Can anyone say dragons i want to travel by Dragonback. Applause to our authors you have both done a phenomal job and i look forward to the Age of Magic.