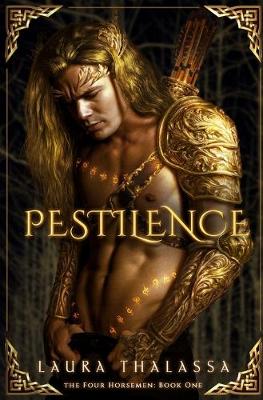 When Pestilence comes for Sara Burn’s town, one thing is certain: everyone she knows and loves is marked for death. Unless, of course, the angelic-looking horseman is stopped, which is exactly what Sara has in mind when she shoots the unholy beast off his steed.

Too bad no one told her Pestilence can’t be killed.

Now the horseman, very much alive and very pissed off, has taken her prisoner, and he’s eager to make her suffer. Only, the longer she’s with him, the more uncertain she is about his true feelings towards her … and hers towards him.

And now, well, Sara might still be able to save the world, but in order to do so, she'll have to sacrifice her heart in the process.

After much deliberation, I did move from 3 to 2 stars. The book was ok, however the theme of the quartet kept me invested. I just don't like Pestilence the character. He's actions are questionable at most. How are you going to say that you think you might have feelings for someone then drag them behind your horse then feel bad about that????? Huh??? excuse me my guy. And then homegirl still likes him after that?? That's a fucking deal breaker to me, pal. Then honestly, how dare you let that old couple die? I just couldn't get invested in Pestilence and that wrecked the book for me. I will say don't give up on the series though! The next book is better!
What???
I have a bit of a mixed bag of feelings when it comes to this one. I've heard so many rave about it and it has been sitting on my kindle for months. With all the raving, I was kind of expecting more. I found it to be a little bit redundant because in the grand scheme of things, they were riding through different cities doing what he was created to do. However, I tapped into the emotional side of things and how he has been processing it. The more time he spends with Sara, he's becoming more human and starting to feel all these emotions he's not accustomed to. That is where the true story lies.

I couldn't quite connect with Sara at all, to me, she felt a lot younger than her age. And at times, I kind of found her immature.

I found their conversations very interesting, they were constantly going back and forth with one another. His reasons were valid at times despite all the destruction he was causing. These two were always at war with what was right and wrong.

As far as the world building goes, there was so much room for more and that's kind of where things fell flat for me. I had so many questions about Pestilence and how he and his brothers came to be. He stated every time that he wasn't able to talk about it and I was always wondering the why.

For the most, I did enjoy the read, it was something I easily devoured, but I just needed so much more. I am planning to keep reading from the series in hopes we get more world building!
this was sooo good
Oh wow.. that was unique! I want more horsemen!

I admit that the 4 Hoursemen story always scred me.. but I LOVE this!!!
Of course this was a big major case of cover love that made me buy this book. But look at this pretty! Can you blame me?

The story itself didn't disappoint, though. The setting is fantastic. Horsemen of the apocalypse? That's a nice change from the usual werewolf or vampire. The author pulls it of quite nicely too. She creates a believable story that kept me entertained for hours on end.
The way the relationship develops between our MC's who are standing on way opposite sides in this story was nicely done too. The author took her time so it grew quite naturally, especially given the kidnap situation, which is not always handled that great.

Can't wait for the next book and the next rider :)
I'll admit that I bought this book primarily because this sounded absolutely ridiculous (and Katy was gushing about it on Twitter), but I was really pleasantly surprised! This book is excellently paced with an incredibly witty narrator and an interesting dystopian story that also has a romance.

Five years ago the four horseman appeared and modern life as we know it - electricity, cell phones - goes by the wayside. But then they just vanished and life continues in the dystopian remnants of society. That is until Pestilence reappears and people along his route are dying by the thousands and there is no cure for the Messianic Fever, which appears to be kind of like an Ebola/Plague awful thing that no one would wish to die from.

Evacuation orders have been sent, but Sara wants to save everyone she loves and stays behind to kill Pestilence. But he doesn't die and he is pissed off, taking her prisoner and vowing to make her suffer.

Overall I really enjoyed this read, but I knocked it down to three stars because I didn't buy the romance - it was a weird combination of enemies-to-lovers and insta-love, but there was literally no development of that relationship. At all. Given the care and development Thalassa put forth in the worldbuilding and overall plot, I was a bit disappointed with how the relationship came to be (but I am down with this pairing for sure).

Thank you Katy for gushing about this one, it was a fun read!

Well, I think War is coming. The last message I saw from Laura Thalassa mentioned a June release date. I can hear you all scoffing that we're more than halfway through June and there is no War but, I still wanted to be prepared just in case. I decided that a re-read of Pestilence was the best way to prepare for the second of The Four Horseman to arrive.

I was so excited to see that Susannah Jones was narrating and it made me even more excited to start my re-read/listen. Ms Jones is one of my favourite narrators. Her acting abilities shine through in her narrating and I find her one of the easiest to listen to when it comes to females "doing" males. It's a slight drop in her voice and rumble that makes it believable and not hard on the ear. Her portrayal of Sara and Pestilence was spot on and I enjoyed the experience.

Pestilence is an amazing story and the narration did it justice. Honestly, I think my read was just a smidge better, though. I'm glad I've bought the audio version for future re-reads/listens, but I'm thankful that reading it was my introduction to The Four Horseman.

If you haven't tried a Laura Thalassa yet, I highly recommend giving her a try.

Pestilence made me question my path…

For the first time, Goodreads’ “likes” lead me to a book. A lot of people might be sitting reading this thinking *Duh, Sassy, that’s what Goodreads is all about*. Well, in this case, it was a little different. I had seen the name Laura Thalassa around the traps, and I had been meaning to check her out. I saw the cover of Pestilence, liked it and when I realised she had written it, I decided that this would be my starting point. So, I added it to my Want to Read shelf and instantly my friends liked it. Liked it so much that my curiosity was even more piqued. Obviously, other readers loved Pestilence or maybe it was Laura Thalassa? Either way, my one-click-finger was influenced and I bought without even checking out the blurb.

Thank you, Goodreads friends, I am grateful you lead me to The Four Horsemen series.

Wow!! Some books come into your life and give you a shiver up your spine. Pestilence gave me a shake/shimmy/shiver that rocked my foundations. I loved the author’s writing style, her characters and the storyline sucked me in from the very first page. Almost instantly my feelings and emotions were in tumult. On this journey, I felt anger towards a killer, that morphed into guilt…because I played a part in setting his path to destruction.

This is the type of story where you can’t help but look at yourself and wonder if you should change your path a little. Am I dooming our world by my thoughtlessness? Should I be showing more love and forgiveness to my fellow humans? Has my disillusionment with politics, media and bad people in general, turned me away from lending a helping hand? The facts are there, but what will be the turning point when we really accept that we’re killing the environment? Are we already doomed because of our greed and selfishness? I loved that Pestilence made me think.

Pestilence is a dystopian romance. I don’t read a lot of these types of stories but in this case, it made me think more paranormal romance than dystopian. Bossy alpha male who makes the rules and expects them to be obeyed. A feisty heroine who stands up for what she believes in. A connection that can’t be denied. These are all things I adore in my romance, so I was left very satisfied.

I don’t really want to go too far into the storyline because I think you will enjoy it better without knowing too much. There is a lot of growth within these characters that you can’t even expect to happen when you first meet them. It’s easy to judge a killer. It’s easy to be tarred with the same brush when so many people act without thought to the consequences. Sometimes you need to look below the surface of a killer. Not everyone is bad and you just need to be in the presence of good, kind and generous people to remember that.

I absolutely LOVED Pestilence. It can at times be a little confronting, a wee bit gory and a touch dark but it was never too much or over the top. The characters were interesting, the love story was at times sweet and also sizzling. I loved getting to know them better and enjoyed seeing them come together.

I highly recommend Pestilence and can’t wait to be on the War path.