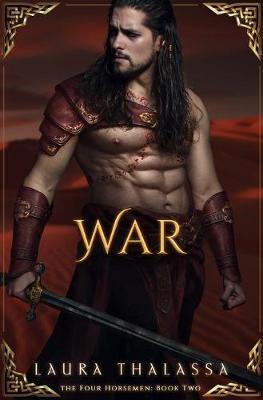 The day Jerusalem falls, Miriam Elmahdy knows her life is over. Houses are burning, the streets run red with blood, and a traitorous army is massacring every last resident. There is no surviving this, especially not once Miriam catches the eye of War himself. But when the massive and terrifying horseman corners Miriam, he calls her his wife, and instead of killing her, he takes her back to his camp.

Now Miriam faces a terrifying future, one where she watches her world burn town by town, and the one man responsible for it all is her seemingly indestructible “husband”. But there’s another side to him, one that’s gentle and loving and dead set on winning her over, and she might not be strong enough to resist.

However, if there’s one thing Miriam has learned, it’s that love and war cannot coexist. And so she must make the ultimate choice: surrender to War and watch humankind fall, or sacrifice everything and stop him.

Much better than the first book! I'm glad I stuck it out with the series! looking forward to the October release.
OK. I binged this one as soon as I finished Pestilence and I have to admit that the heroes have been making this series for me.

I know that I'll have the unpopular opinion with this, but I didn't love Miriam. I loved her character in the first few chapters, she's a fighter through and through. And I did understand her hang-ups about War, but when it came to getting things her way. It was almost disingenuous how she went about it. And that had me at #TeamWar just about 24/7.

The ONE question that I constantly had throughout the book about why he was so certain that Miriam was his wife. And I have to say once we found out the reason, MY. HEART. That was not the reason I was expecting, but my goodness I was here for it.

We're definitely getting a lot of the same, plot-wise, of what we saw in Pestilence with going through all the towns and wreaking tragedy. Which brings the big question of how the overall story arc will end because all the Horsemen will fall in love. What happens then?!

I didn't love this one as much as I hoped. I expected the Horsemen to be a bit more gritty and darker? I keep thinking about Khal Drogo from Game of Thrones and was wondering if we'd get the same with War, but it didn't come off he pages that way.

HOWEVER, I'm a fan of Laura's writing, I was engaged the entire time and didn't want to stop. So I'm definitely looking forward to reading her other books. I'm planning on continuing the series because I have to know what happens.
It’s hard to love War

This review is a wee bit spoilerish if you haven’t read Pestilence yet. Please proceed with caution.

I think the hardest part of reading an EPIC book like War is deciding whether to surrender. You are faced with so many internal dilemmas about choices, sacrifices, deciding whether to have faith and whether there is redemption for those who sin. Can we look at someone like War, and judge him for something he has no power over? War's purpose was to judge the hearts of men and send them onto their maker if they are sinners. It’s like reading Pestilence all over again. I can’t help but look at the world around me, and think, we’ve done wrong by our people and our planet, when will we stop?

War is nothing like Pestilence. Well, in some ways he’s like Pestilence, as they’re both mean buggers and their purpose and mission is EVERYTHING. But, in a lot of ways, they are different. Pestilence could kill a city just by walking through it. War brings an army to help him kill a city. I think the biggest difference for me was that I felt sympathy for Pestilence a lot sooner in his story than I felt for War. I hated War for a lot of his story. His single-minded focus on killing, narrow-minded views, and judgemental attitude made him less than desirable. I found War, hard to love.

I spent most of the time reading War thinking Miriam made ALL the wrong decisions. The only problem is…I don’t know if there was a right decision Miriam could have made. Do you kill, or be killed? If you protect, will you let someone else pay for it? When your “husband” is the evilest man you’ve ever met…and he can’t be killed, what do you do? Like Miriam, I spent a lot of time trying to work out how to get through to War that what he was doing was wrong. BUT, in the next minute, bloody humans do what comes naturally to them…fight, rape, kill and steal…and I’m back to thinking maybe War’s right. Well, maybe not right, but not completely wrong either.

Laura Thalassa has an amazing talent for making you think beyond what is in front of you. I’ve had a cold this week and I’ve felt extremely sorry for myself. How can I complain, though? I have a roof over my head, access to medicine and doctors, electricity to heat my house and loved ones to care for me. Not even comparing my situation to War, there are a lot of people who are not as lucky as me. Like after reading Pestilence, for about 2.5 seconds I want to be a better person and do better by my fellow humans. The problem is that this task is bigger than just me, we all need to want to be better and do better by each other.

I honestly LOVED this journey and I think Laura Thalassa is a master at her craft. War flowed in a way that felt intimidatingly long but was over in what felt like the blink of an eye. This is a story that will make your skin crawl, heart beat extra hard, and mind whirl with unanswerable questions. You want to kill but know that killing isn’t the answer. You want to care but know that caring will not save them all. You want to love but know that loving the monster means loving what you hate most. I loved that I hated War, but I loved that I came to love him too.

War took me from the highest highs to the lowest lows. I never thought I would end this story with a goofy smile on my face, but I did. It’s ugly, dark and sinful but it’s also bravery, determination and dedication.

At the end of the journey, I surrendered to War.

I find it almost impossible to finish an EPIC story like War…and just move on. I can’t read anything similar because it will be hard to beat. If I change up the genre, then there’s a chance that I might misdiagnose my mood and pick the wrong sub-genre. The next book after an EPIC is always hard to pick. Maybe I should take a break from reading…HAHAHAHAHAHAHA!