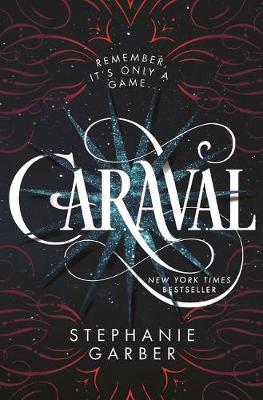 Welcome to Caraval, where nothing is quite what it seems...

'If you ever wondered how it would feel to step into a dream, here's your ticket' - Stacey Lee

Scarlett has never left the tiny isle of Trisda, pining from afar for the wonder of Caraval, a once-a-year week-long performance where the audience participates in the show.

Caraval is Magic. Mystery. Adventure. And for Scarlett and her beloved sister Tella it represents freedom and an escape from their ruthless, abusive father.

When the sisters' long-awaited invitations to Caraval finally arrive, it seems their dreams have come true. But no sooner have they arrived than Tella vanishes, kidnapped by the show's mastermind organiser, Legend.

Scarlett has been told that everything that happens during Caraval is only an elaborate performance. But nonetheless she quickly becomes enmeshed in a dangerous game of love, magic and heartbreak. And real or not, she must find Tella before the game is over, and her sister disappears forever.

A mesmerising, magical and stunningly imaginative debut novel for anyone who loved The Night Circus.

Oh boy, this book was such a mess.

The writing: Scarlett feels emotions in colour, but it has no relevancy to the plot and it feels like it's only added in as a vehicle for overly descriptive writing: “a tingle of periwinkle curiosity prickled her senses”. Like, what is that shit?

The worldbuilding: It takes place in a fantasy world, which has islands, seasons and magic. That's essentially all the world building you get. Everything else is as vague as smoke.

The plot: Caraval is a travelling gameshow that makes absolutely no sense. The goal of the game is to decipher the clues and locate Scarlett's sister, Donatella, and the whole game revolves around these two characters, making it absolutely worthless for any other contestant who joined with the hope of winning.

Most of the clues don't even make any sense, and everything that happens feels completely random. Scarlett guesses her way through solutions, and is only right because the plot wants her to be.

The main character: Scarlett is supposed to be the cautious, sensible sister, and yet she jumps at every single infuriating chance to be gullible. She's told multiple times that the game is an illusion and to not trust anything, and yet she goes along with everything and accepts literally any deal without hesitation. Only afterwards does she go, "Oh no, I think I made a mistake". Multiple times.

The romance: Scarlett and Julian have known each other for 5 days (including two full days when Scarlett was drugged or magically knocked out). At first Scarlett finds Julian annoying and untrustworthy, and his only redeeming quality is his rock solid, perfectly sculpted abs. And then suddenly they're madly in love. That's the romance.

In my personal spreadsheet I gave this book a negative star rating, but since that's not possible, it gets a half.

Caraval was the narrative equivalent of an Old Spice advertisement!

But still, I found myself oddly engrossed. Was Caraval good? No. Magic was constantly used as a plot crutch, and the narrative hinged almost entirely on outdated gender stereotypes and how attractive its characters were. But did I have fun reading it, regardless? Yes.

3,25 ⭐️
The first word that comes to mind when I think about this book is - whimsical. It’s very whimsical, I liked it. But you know I actually think I enjoyed Once Upon a Broken Heart even more. I’ll be reading the rest of the series for sure.

I suspect the thing most people would say they like about Caraval is the world, the visual descriptions and the magic. And along with that the twists and turns in the story. I can't say I liked any of those things.

The world is definitely imaginative. But the descriptions were a bit too involved for me and pulled me out of the story more than they drew me in. In fact, for quite a while it felt like the book was more enthralled with its ability to describe fantastical things than an actual story. I don't think it actually got going until day 2 of Caraval.

The twists weren't that twisty. Granted, I didn't think Tella had actually died, but also didn't think Julian had died. I did think Dante was dead, which was disappointing. But overall I tended not to trust much of anything that was happening and see how it played out.

I think I would have enjoyed the story more as easy amusement if I hadn't disliked Scarlett quite so much. I found her obstinate and controlling from the outset. Annoyingly so.  She's naïve and foolish and yet her bad decisions end up paying off for her in a way that makes other characters act like she's smart.

Even more than that, I despised Donatella. She's not in the story much, but in those little appearances she is nothing more than a selfish, naïve, ridiculous girl. Which undercut Scarlett's whole motivation to save her ‘beloved’ sister because there was nothing beloved about her her in any way. There was nothing to like, let alone grieve in her death. And throughout the whole book I had no reason to want Scarlett to save her (to be fair I didn't think there was anything to save her from since it was just a game - Scarlett could have sat around drinking tea the whole time and at the end I'd expect her sister would saunter in and they'd sit down to decide where to go next).

The other characters really carried the story. I liked Julian and Dante and Aiko. I did like the rules of the world like the price of the dresses which created an interesting scene with Julian. I kept reading a bit from a sense of curiosity but more to see how it all played out with the other characters then how it played out for Scarlett and Tella.

I looooved Caraval! Scarlett felt easy to relate to, and I really enjoyed all the twists and turns. Just when I felt like I knew how the story was going to unfold, it turned down a completely different path. Excellent read and I’m ready for book 2!
Star Rating: —> 4 Stars


Interesting
This was pretty good. There was one particular thing that I didn't really understand until I listened to a podcast that the author spoke about the book. She said the color emotions were a form of expressing her feelings that she couldn't put into words. Which come to find out is called synesthesia. I looked that up and there are like 50 different versions. The one thing I did have a hard time with were some of her descriptions. I would be thinking of one thing and then the next paragraph I would feel confused because I would think that I was in a totally different area but really the characters were still in the same spot. Overall I liked the idea behind the book and the world she was creating. I do feel there could have been more as she did like to have the character repeat her love of her sister quite often and those spaces could have been filled with more descriptions of them or the area and more background on the characters.
3.5 stars
DNF