What Happened to Goodbye 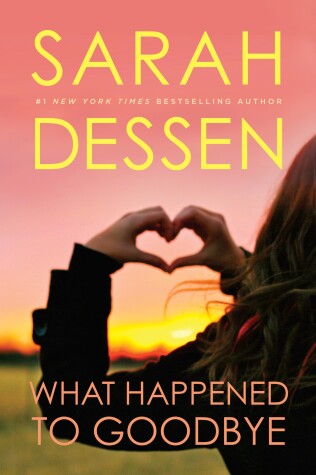 What Happened to Goodbye

In the past few years, Mclean has pretended to be so many different people that she hardly remembers who she really is anymore.

The adorable guy next door might be able to help her figure it out.

But is she ready for it?

“A cut above” —People

A few years ago I picked up This Lullaby and instantly fell in love. After I read it, I order all her other ones and read them all in about a week or two. You can't imagine how excited I was when I saw What Happened to Goodbye was coming out. It had been so long since I read one of Sarah Dessen's books that I missed the feel and the realism of her stories.

Mclean was so caught up in her routine of starting a new life every where she went that she didn't even realize how hard she was struggling. You don't even realize it either, but despite that, you can't help but to connect with her characters. When you're in high school, you're still trying to figure out who you are, and that is something everyone can relate to. She finally figured out a lot of things about herself as well as her relationships and just with life.

I loved every single character in this book because they were all so real. Dave I fell completely in love with because it seemed to be also struggling with figure out who he was and where he wanted his life to go. He was a super genius, but yet, he decided to graduate with all the other kids his age. And he got into some trouble, which was apparently unlike him. Really, all the characters play a part in who Mclean was and in helper her find out.

I absolutely love What Happened to Goodbye, but I have to say that Along For the Ride has to be my favorite. I can't wait for another Sarah Dessen books and meet another character dealing with a real life situation teens face and finding out the true meaning of happiness and love.