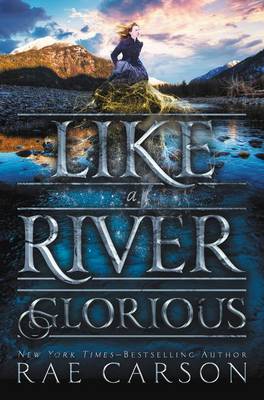 Lee Westfall a young woman who can sense gold in the world around her and her friends have staked their claims in California, but the real danger and power of Lee's gift is only just beginning. The second book in Rae Carson's Gold Seer trilogy escalates the romance, the magic, and the action of Lee Westfall's epic story.

I loved this book. Genuinely. LIKE A RIVER GLORIOUS is just as good as WALK ON EARTH A STRANGER. The characters are dynamic and likable, the villains dark and unforgivable. The world Rae Carson has created feels like a true reflection of the actual historical period, but unlike every other piece of historical fiction I've ever read, she faces racism and sexism head on and it's beautiful.

I love watching Lee grow into her powers, Jeff grow into his identity, and the settlers build a town. I feel like the odds keep stacking up and that something major is going to explode in book three and I'm so excited for it. This is a rare second book that added to the momentum of the first while maintaining high stakes and an interesting storyline. I LOVED it. It was perfect in every way.

For a more detailed review on this book and others, or for more bookish content, come visit The Literary Phoenix.
Rating: 4.5 Stars

"Like a river glorious, is God's perfect peace.
Over all victorious, in its bright increase...."

I was really pleased with where Carson went with Leah's story, and oh that ending!!! My love for Jeff just grew and grew. There were times when he was really the only bright spot in bleak times. I thought Carson really turned up the magic, and I loved seeing Leah grow into her power. There were many difficult things I had to witness, but in the end Leah was surrounded by her "people", her family, who kept things hopeful.

I thought the magic would save us all. But it turns out, all the magic in the world is rubbish compared to good people who take care of their own.

It's just good, not great. This felt pretty wrapped up to me. But I guess there is a third one coming out? Alright, I'll read it.
Full review (and a GAME!) here!

So, this book was full of awesome. In the very beginning, I was the teeniest bit concerned, because the book started off a little predictably. But that was basically my only qualm whatsoever, and that was out of the way within the first 50-75 pages or so. Then things got awesome, but in a totally different way than the first book.

Where Walk on Earth a Stranger was all about the actual getting to California, Like a River Glorious is about actually surviving it. California circa 1849 is... not great. The author does a phenomenal job of showing why it isn't great, too. The era comes to life on the page, and I could almost feel the discomfort of the unknown, undeveloped land. Lee is of course used to this harsh way of living after months on the trail, but it doesn't really get easier- she just has to keep coping, as to her companions.

This book also goes even further in depth with a lot of issues that were touched upon in the first book. Sexism, racism, discrimination of pretty much all kinds are rampant in California. And since the laws are murkier (and in some cases, non-existent) the treatment of women and minorities is downright appalling. Really, it's quite hard to read, but in a good way because it is clear that this is accurate. The author sugarcoats nothing; she shows us the way people really were treated.

Lee gets even stronger in this book- but in much different ways. Yes, we know she can handle herself on the trail, but this book has Lee in some very difficult situations that require a lot of mental strength.

A few other things I really loved:

•I feel like we get to know the secondary characters so much better, and I love them! They are very multifaceted, and I love getting to know them better, and as more than just a wagon party.
•The romance is still super slow burning and sweet- and I still ship it a lot.
•There's still plenty of adventure- no one is just hanging around in California!
•The fantasy element plays more of a role in this book. While I was fine without it as much in book one, I did like how it was worked into book two.

Bottom Line: An awesome sequel with very well developed characters (who I also happen to love!) and a raw and honest look into life in 1849 California. I cannot wait for the third book!