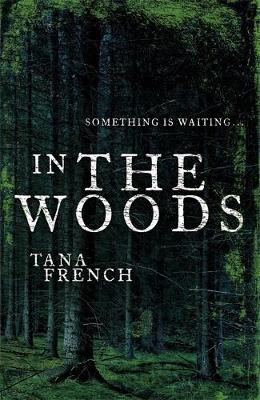 When he was twelve years old, Adam Ryan went playing in the woods one day with his two best friends. He never saw them again. Their bodies were never found, and Adam himself was discovered with his back pressed against an oak tree and his shoes filled with blood. He had no memory of what had happened. Twenty years on, Rob Ryan -- the child who came back -- is a detective in the Dublin police force. He's changed his name. No one knows about his past. Then a little girl's body is found at the site of the old tragedy and Rob is drawn back into the mystery. Knowing that he would be thrown off the case if his past were revealed, Rob takes a fateful decision to keep quiet but hope that he might also solve the twenty-year-old mystery of the woods.

I wasn't sure what I expected when I picked this up. But I enjoyed the twists and turns. I think French did an excellent job with mystery and the creepiness. She really sets you up for one thing and then in the end surprises you. I found myself frustrated because I just didn't expect anything that happened. Which I think says a lot about how great a book is. I absolutely loved the way she formulates the characters. I'll be picking up and reading the next in the series for sure.
hm.
The writing is exquisite, this book reads like a movie, I "saw" it happen in all its, sometimes gruesome, detail. If you let yourself be captured by the story, it will fully pull you in and you will live it.
I guess this also explains the absolute sadness I felt at the end. Not because it was the end, but because I was fully invested and hoped for good things to happen to less than perfect people (aren't we all a bit less than perfect?), and I wanted justice to be served and the world to be given to me in the sharp black and white of a perfect photo. Well...
This book reminded me life is never that clear cut, it's all shades of gray, forever twisting. Justice does not always prevail. Sometimes people do not get what they deserve. Sometimes there is no clear answer, no key to the "why?".
So much introspection from a murder mystery? Yes, exactly that much. Go read it and make your own mind up. I for myself know I will read more Tana French.
There are always bad things that can happen when kids are playing outside. In Tana French's In The Woods, our protagonist, Adam Robert Ryan, is playing with his two best friends in their Dublin suburb when something goes wrong. The children vanish. After a few hours of searching, Adam is found, but the other two are gone. And Adam is covered in blood and has been rendered completely mute by whatever it was he'd experienced. He recovers after a few weeks in the hospital, but has no memory of what might have transpired that day. He's pulled out of his old school and put in a boarding school in England, where he starts going by his middle name and grows up more or less like any other kid. He goes back to Ireland, becomes a cop, and manages to work his way into his dream job working on a murder unit in Dublin, where's he's partnered with Cassie Maddox, the only other person as young as he is. Although they're not dating, they have become intensely emotionally intertwined.

For the first time since he left it as a child, Ryan is pulled back to his hometown when a teenage girl is found murdered on an archaeological dig site. As he and Maddox try to figure out why someone might have killed the aspiring ballerina, he can't help but also start to try to dig around inside his own past for any clues it may offer. They chase down leads and become even closer as the stress mounts, creating a combustible situation as Ryan becomes less and less able to separate the crime at hand from whatever might have happened to him that long-ago summer day.

I very much enjoyed this book...while mystery doesn't tend to be my genre of choice (I find it too often dependent on hiding information from the reader and/or ridiculous plotting to build suspense), French also creates excellent, compelling characters and allows their development to be just as crucial to the story as the twists and turns of the investigation. I was emotionally invested in both Ryan and Maddox and wanted to know more about them and the ways their personal lives impacted their police work. And I thought the central mystery was also very well-done and nicely walked the line between dropping clues that fed into the ending without just spelling it out and laying it out there on a plate for you. Then again, "figuring it out" too early doesn't usually detract from my ability to enjoy the work...I've long maintained that if your story doesn't work unless the reader is surprised, it's not a good story, it's just a good twist.

And while the central mystery is wrapped up, I will warn you away from this book if you hate books that have significant ambiguity to the ending: Ryan is never quite able to piece together what happened that day in the woods. I personally didn't mind it and thought French did a good job with keeping that part of the story relevant even if it never came together, if only for the way it impacted Ryan and his mental/emotional state. This is the first in a series, and I've actually heard quite often that it's the weakest of them, so if this is as bad as it gets (and I thought it was really good), I'm excited to read the rest of them. I'd recommend it to everyone, even if you don't usually like mysteries.
I don't quite know what to say about this. French's writing is so, so good and incredibly addictive. I obsessed over it for the last five hours of the audio. However... I like closure. I know life isn't always tied up in neat packages, but none, and I mean NOT A SINGLE ONE of the various strings gets tied up. My heart is aching for Katie, for Adam, and for Rob. Ugh. I know I'll go back for more French, but man. She's killing me.
Fascinating and absorbing. I was left with a very sad, bittersweet feeling at the end - yet it was still satisfying because yeah, that's real life. The writing is beautiful and draws you in (an accomplishment for a first-person narrative), and the details are well-researched enough to feel real. Enough twists and turns and chillbump-raising moments for a mystery addict, though maybe not for a suspense novel. I can't wait to read the next one!
I have been recommended the Dublin Murder Squad by Tana French multiple times, not sure why. So I finally decided to pick up the first book In the Woods, which tells the story of Detective Rob Ryan and Detective Cassie Maddox assigned to the murder of a twelve year old girl. More than twenty years ago Ryan and two friends got lost in the same woods. He returned, but what happened to his friends remains a mystery.

This was a fresh and dark psychological suspense, which I enjoyed far more than I expected. My problem with best-seller crime novels is they tend to be very formulaic and unoriginal. Tana French managed to keep the same format but still made the book stand out. I think the chemistry between Ryan and Maddox played a big part of this. I was shipping the two and hoping they will end up together. I hear this series follows different characters in the Dublin murder squad which I am worried about, I want more from these two characters.

This review originally appeared on my blog; http://www.knowledgelost.org/book-reviews/genre/thriller/mini-reviews-crime-edition/
The writing is beautiful. Cassie is the best. ROB SUCKS.
WARNING: DO NOT READ IN THE WOODS WHEN YOU ARE ACTUALLY IN THE WOODS!

I made the foolish mistake of reading Tana French's In The Woods while at my families home in upper Wisconsin, in a wooded isolated area. I don't want to come off as some kind of chicken because the novel wasn't actually scary but very suspenseful and creepy. Obviously being "in the woods" added to said emotions.
In a suburb of Dublin in 1984, three children ran into the woods, their childhood playground and fortress. Long after tea time the children are declared missing with only one being recovered, clinging to a tree with congealed blood in his shoes and no recollection of the past few hours.

It has been 20 years since that horrifying day and Rob "Adam" Ryan, the found boy is now on Dublin's murder squad and has managed to keep his childhood identity a secret. Although when a twelve year old girl is found murdered in the same woods and under very similar circumstances Rob may have the opportunity to solve not only the present case but also the one from his past.
In The Woods is like a grown-up ghost story told around the campfire, the weather sets the ambiance, the crack of a stick makes you jump and the shadows have you looking over your shoulder. Shadows and misconception can cover ones persona and can arrange it in a new order to deceive the eye. (Little Red Riding Hood is a prime example) Tana French's novel does just that, with a psychological twist I never saw coming. I cannot end without mentioning Ryan's partner Cassie Maddox a clever new detective in the same category as Steig Larrson's Lisbeth Salander. She is bright, mysterious and knows more than she lets on. (and not to mention Cassie keeps Rob in line) With a on-the-edge-of-your-seat plot and well developed characters it is hard not to find yourself lost in the woods.
First the good, I really enjoy this writer's "style" of prose, it's almost poetic, if that makes sense and the story in this novel I enjoyed more then her other novel (The Likeness), but overall it still fell short for me. The most interesting of the two stories being left unsolved really disappointed me and I found one of the two main characters just truly unlikable, so ya, this was just an OK read for me....