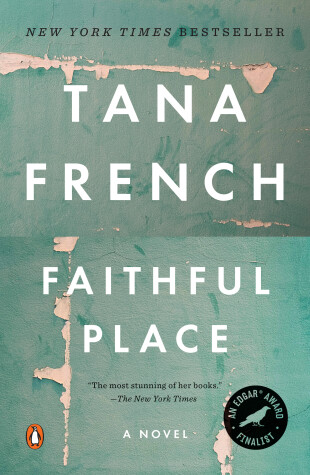 From Tana French, author of the forthcoming novel The Searcher, “the most important crime novelist to emerge in the past 10 years” (The Washington Post), the bestseller called “the most stunning of her books” (The New York Times) and a finalist for the Edgar Award.

Back in 1985, Frank Mackey was a nineteen-year-old kid with a dream of escaping hisi family's cramped flat on Faithful Place and running away to London with his girl, Rosie Daly. But on the night they were supposed to leave, Rosie didn't show. Frank took it for granted that she'd dumped him-probably because of his alcoholic father, nutcase mother, and generally dysfunctional family. He never went home again. Neither did Rosie. Then, twenty-two years later, Rosie's suitcase shows up behind a fireplace in a derelict house on Faithful Place, and Frank, now a detective in the Dublin Undercover squad, is going home whether he likes it or not.

This is one of those times where I felt very underwhelmed by a book that is clearly very well written.
I’ve been strangely hesitant whenever I’ve started a Tana French book. I think it’s because each new book features a non-POV character from the previous. With The Likeness, I thought “But I really liked Rob, what if I don’t like Cassie?” With Faithful Place, it was “But I loved Cassie, who cares about Frank?” I’m pleased to say, I’ve learned my lesson.

This book is every bit as good as In the Woods and The Likeness were. Like those, on the surface this is a mystery, but deep down it is much more about the main character. French gives the gruff Mackey a surprising amount of depth. His reluctant return to the home of his youth shows us the motivations behind everything he does. We root for him despite his flaws and despite our inability to completely trust him. Solving the mystery is a bit like solving Frank.

I find it difficult to convey exactly what it is about French’s writing that pulls me in so completely. Part of it is the characters she creates. They’re just plain interesting, even the minor players. Another part of it is the dynamics between the characters. There are layers to every interaction.

I listened to the audio version of this book, and it was just as gorgeous as The Likeness was. Hearing the story in an Irish brogue lends it an extra touch of authenticity. I was sucked in from the very first chapter.

I was excited to discover that French’s fourth book, Broken Harbor, comes out this summer!
This was my first Tana French. And definitely not my last.