A Touch of Darkness (Hades & Persephone, #1) 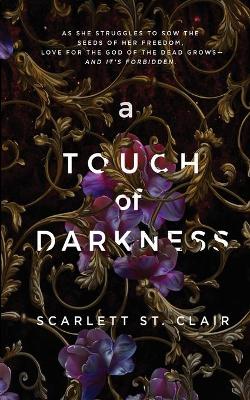 A Touch of Darkness (Hades & Persephone, #1)

Persephone is the Goddess of Spring by title only. The truth is, since she was a little girl, flowers have shriveled at her touch. After moving to New Athens, she hopes to lead an unassuming life disguised as a mortal journalist.

Hades, God of the Dead, has built a gambling empire in the mortal world and his favorite bets are rumored to be impossible.

After a chance encounter with Hades, Persephone finds herself in a contract with the God of the Dead and the terms are impossible: Persephone must create life in the Underworld or lose her freedom forever.

The bet does more than expose Persephone’s failure as a goddess, however. As she struggles to sow the seeds of her freedom, love for the God of the Dead grows—and it’s forbidden.

I wasn't sure what to expect when I started this. But I really enjoyed it. I liked the take on Persephone and Hades and the way she crafts the gods are really interesting. The interactions between Persephone and Hades is great and really what makes the book. Really looking forward to reading the next books in the series.