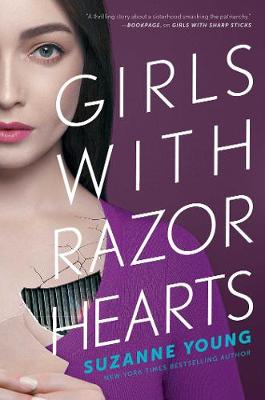 It’s time to fight back in this second novel in a thrilling, subversive near future series from New York Times bestselling author Suzanne Young about a girls-only private high school that is far more than it appears to be.

Make me a girl with a razor heart…

It’s been weeks since Mena and the other girls of Innovations Academy escaped their elite boarding school. Although traumatized by the violence and experimentations that occurred there, Mena quickly discovers that the outside world can be just as unwelcoming and cruel. With no one else to turn to, the girls only have each other—and the revenge-fueled desire to shut down the corporation that imprisoned them.

The girls enroll in Ridgeview Prep, a private school with suspect connections to Innovations, to identify the son of an investor and take down the corporation from the inside. But with pressure from Leandra, who revealed herself to be a double-agent, and Winston Weeks, an academy investor gone rogue, Mena wonders if she and her friends are simply trading one form of control for another. Not to mention the woman who is quite literally invading Mena’s thoughts—a woman with extreme ideas that both frighten and intrigue Mena.

And as the girls fight for freedom from their past—and freedom for the girls still at Innovations—they must also face new questions about their existence…and what it means to be girls with razor hearts.

The themes of this book are communicated as clearly as being hit over the head with a plastic lunch tray.
I received this book for free in exchange for an honest review. This does not affect my opinion of the book or the content of my review.It's no secret that Girls with Sharp Sticks was one of my favorite books of 2019. I was absolutely thrilled when I was offered an ARC of the sequel, Girls with Razor Hearts and could not wait to dive into this sci-fi/dystpopian story again (which is a true testament to how well written this series is, as those are genres not typically in my reading wheelhouse!) While I found Girls with Razor Hearts to have an overall different vibe than its predecessor, I still very much enjoyed this story of feminism, strength and resilience.

*Note, this review will contain spoilers for the first book in the series, but not the second!

Girls with Razor Hearts picks up pretty immediately after the events of Girls with Sharp Sticks, opening with the core gang escaping from Innovations Academy and trying to process everything they learned at the end of book one. How they are actually artificial intelligence, created and crafted to the specifications of donors, to cater to their whims, fantasies and tastes. This series is so creative in how it takes a somewhat "scary" premise (AI becoming so intelligent it can think for itself/outsmart humans) and making it heartfelt and vulnerable. Philomena and her fellow girls are so earnest and empathetic and supportive of each other and their emotions don't feel lessened because they aren't fully "human." Yet they must deal with being treated as objects because of their origins (and the story explains the further layers of oppression that some experience based on other traits too, such as the struggles one of the girls faces due to her darker skin or the debasement they suffer from being women in a patriarchal society). Their experience as AI young women was nuanced, varied and heartbreaking, and I appreciated the multiple layers that the author added to their experiences.

Out of the academy, most of the novel takes place in the "real world," with the girls trying to find the core investors of the academy and infiltrating a fancy private school in order to do so as they have information that one of the investor's children may attend school their. Seeing Philomena and her friends have to navigate an actual high school rather than the bubble of Innovations Academy is difficult, especially as it's filled with vile and rage-inducing characters who treat those who are different than them (in gender, social standing, etc) horribly, and the school system and administration is set up to protect them and reward them for this behavior. It may seem over the top for Philomena and her friends to encounter so much hatred in one school, however I saw it as an example of the many, many mico (and not so micro) agressions that many have to face in society all emphasized in one environment that is the ideal setting to breed and normalize such behavior. It really reaffirms Philomena's fight with the other girls to find the investors and push for a better, more compassionate world.

In this installment there's many new characters introduced with varying agendas on how they want to change the social sphere, from regressing to radical. It added a balance to the story, as Philomena meets characters (such as the author of the poems who originally "woke" the girls) who swing too far in the anti-men camp for her liking, and challenge her to evaluate the behavior of all of the men she has met. While the message of "dismantle the patriarchy" can be strong in this series, Young also balances it with characters who defy the stereotypes and push Philomena to critically think about what she knows about the academy and what she thinks about the world around her that she's encountering for the first time.

Overall: Girls with Razor Hearts is a difficult yet important installment to this series that showcases how horrific things are both at Innovations Academy and the real world. Now that Philomena and her friends are "awake," they must think critically about their place in the world, the behaviors they witness, and how to forge the right path forward. I look forward to the next installment!

I really loved Girls With Sharp Sticks, and was super excited to dive into the sequel. And while it did feel like a sequel in some ways, it was still definitely good, and provided a very clear and firm message. It is extremely feminist, and absolutely calls out the patriarchy over and over again. The thing is, it didn't paint all men with the same brush, which I was glad about. It wasn't man-bashing, it was bad-man-bashing. Which I am 100% here for.

In this book, the girls had to flee town and Mena ends up at a crappy private school with a bunch of privileged asshats. And I am certain that these places exist. Athletes get privileges that no one else gets, jerks with rich dads get to basically run amok. And the author addresses how as bad as it is for women in general, women of color deal with even more awfulness.

While the good portion of this book is devoted to stopping some awful men (both those who created them and those in charge at the school), there is still time for a lot of great interaction among the girls. And yes, Jackson is a thing, but I won't tell you in what capacity.

There are some good twists and plot movement, but it did seem a bit less intense than the first. It's not an altogether bad thing, just a thing worth mentioning. Still, a solid book, and I absolutely can't wait to find out what's next for Mena and the rest of the girls!

Bottom Line: A solid sequel that will infuriate you with its authentic take on the excessive privilege of rich white men.
Read more of my reviews at Cornerfolds.com!