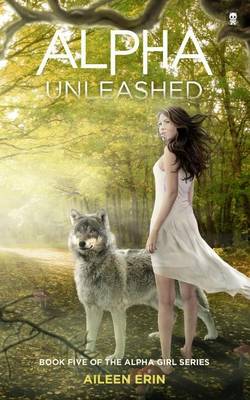 Tessa McCaide has had it up to here with supernaturals.

Luciana may have failed to steal Tessa’s magic, but she’s just getting started on her crusade for magical domination. If her demonic summoning isn’t stopped, it could mean the end of everything.

Tessa’s pack, including her mate Dastien, are ready to fight, but the ragtag group of shifters and witches are no match for Luciana’s power. A little help (and ancient Inca mojo) from Tessa’s bruja cousin, Claudia, may give the side of good a chance if she can make it home in time, but stopping the war is no longer an option.

When witches and werewolves fight, no one wins. Only time will tell who will still be standing after the last spell is cast.

Alpha Unleashed is very likely my favorite of the series. There's so much happening! The first third or so takes place concurrently with Bruja, so we get to see what was happening back at the compound. Nothing is as it should be. Tessa can't feel some of her packmates in the pack bond anymore, wolves are fighting with each other, and she keeps having these moments where she can't wake up, but isn't exactly having a nightmare. And all of this is happening while Luciana is still out there, plotting who knows what. At least until her entire coven turns up dead, and there's no way to cover that up from the humans.

Alpha Unleashed is really nonstop action and madness. Obviously Luciana is gearing up for something huge, but I honestly didn't expect her to do what she did in order to set that up. It was beyond anything she had done up until that point, and for a moment I honestly thought there'd be a magical solution to it. But then as the story moved forward, it was clear that that was not the case. Tessa, the wolves, witches, and Cosette were not ready for that at all. I still definitely had hope that everything would work out!

I would be really happy with Alpha Unleashed as an ending to this series. Nearly everything was nicely resolved, and what's left open, I could probably live with not knowing (but I do want to know what's up with Cosette?!?!). I'm certainly not opposed to more though!