The Voice on the Radio (Janie, #3) (The Face on the Milk Carton)

by Caroline B. Cooney and Cooney 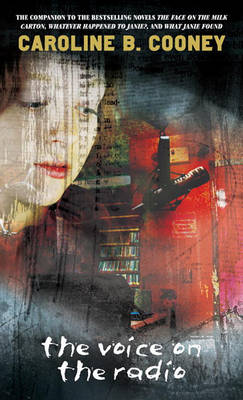 The Voice on the Radio (Janie, #3) (The Face on the Milk Carton)

by Caroline B. Cooney and Cooney

Companion book to the bestselling novels "The face on the milk carton" and "Whatever happened to Jane?"

The kidnapping conclusion has calmed with Janie adjusting to her new families. Unfortunately, her rock, her boyfriend Reeve, has gone off to college all the way in Boston, and the long distance relationship is taring her apart. Reeve, while he misses Janie is busy with his new gig as a disk jockey, on a local college station. On his first night he is welcomed with dead air, until he starts a story, Once Upon A Time a girl was kidnapped.... Reeve's "janies" become an instant sensation and famous in his own right overnight. All is right, as Janie is in Connecticut and unable to receive his station, he's seemingly save, until Janie Johnson comes for a surprise visit and hears a voice on the radio.

The Voice on the Radio, could have come off like a rehash of The Face on the Milk Carton, but it didn't, I was riveted once again. Janie's story was told in a new refreshing voice as fascinating as it was the first time. Although, I had a hard time getting past what a prick Reeve was being. Reeve, the perfect boy next door, why Reeve, why? How could you sell your girlfriend like that? Even the head of the radio station said as much. I was disappointed. Although, despite my loathing Reeve his scenes were my favorite as they were the most dramatic. The Janie front was filled with whining and crying which gets a little old. I really enjoyed this installment in the Janie Johnson series, even though Janie was like a whiny three year old and Reeve was an undeserving dick, because occasionally I think its fun no matter how annoying to have a character you want to throw the book at.