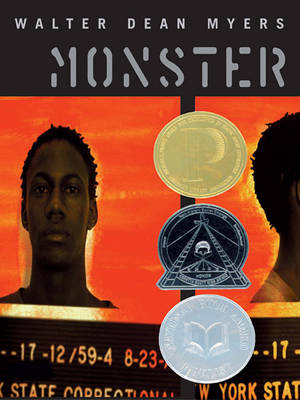 While on trial as an accomplice to a murder, sixteen-year-old Steve Harmon records his experiences in prison and in the courtroom in the form of a film script as he tries to come to terms with the course his life has taken.

Monster was a compelling story, where there are several themes I can use for teaching. Having such an unreliable narrator will also make a lot of the work I'll ask of my students more interesting in many ways.
Monster is such a sad, riveting, and realistic tale of a young black man growing up in the projects. Steve is sweet kid, confused and screwed by the system. 16 years after publishing and it still resonates.

* Admittedly not a fan of reading the script type set up, but it worked and showed Steve's POV and character well.

The script set up through me enough that even with a small cast of characters, I had trouble keeping them straight. I can't handle the names just floating out there type set up, I kept reading over them and forgetting. Same thing with the acronyms, even though I figured both those things out from context, it was disorienting at first. Except MS, that has a different meaning to me (the disease fwiw) and I couldn't for the life of me remember. Then I facepalmed so hard after I looked it up.