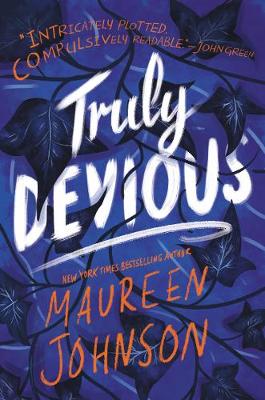 From New York Times bestselling author Maureen Johnson comes the start of a new series about a sharp and funny young detective named Stevie Bell who begins school at an elite, yet peculiar, boarding school and finds herself entangled in a murder mystery; perfect for fans of 13 LITTLE BLUE ENVELOPES.

New York Times bestselling author Maureen Johnson weaves a delicate tale of murder and mystery in the first book of a striking new series, perfect for fans of Agatha Christie and E. Lockhart.

Ellingham Academy is a famous private school in Vermont for the brightest thinkers, inventors, and artists. It was founded by Albert Ellingham, an early twentieth century tycoon, who wanted to make a wonderful place full of riddles, twisting pathways, and gardens. “A place,” he said, “where learning is a game.”

Shortly after the school opened, his wife and daughter were kidnapped. The only real clue was a mocking riddle listing methods of murder, signed with the frightening pseudonym “Truly, Devious.” It became one of the great unsolved crimes of American history.

True-crime aficionado Stevie Bell is set to begin her first year at Ellingham Academy, and she has an ambitious plan: She will solve this cold case. That is, she will solve the case when she gets a grip on her demanding new school life and her housemates: the inventor, the novelist, the actor, the artist, and the jokester. But something strange is happening. Truly Devious makes a surprise return, and death revisits Ellingham Academy. The past has crawled out of its grave. Someone has gotten away with murder.

The two interwoven mysteries of this first book in the Truly Devious series dovetail brilliantly, and Stevie Bell will continue her relentless quest for the murderers in books two and three.

I've had my eye on Truly Devious by Maureen Johnson for a while, without really knowing much about it. Such a striking cover! Sow hen it was recently on sale for 99p for Kindle, I read it's blurb and snapped it up. However, it was a pretty huge disappointment.

Stevie is obsessed with true crime and detective stories, so when she manages to get into Ellingham Academy, a prestigious school for gifted teens, she's over the moon. Not only can she now take classes to help her on the way to becoming a modern day sleuth, but she can start her work now. Ellingham Academy is not only famous for it's quirky way of teaching, but also because of a historical kidnap and murder. Founder Albert Ellingham's wife Iris and daughter Alice were kidnapped for a ransom in the 1930s, soon after the school opened. Despite Ellingham giving the abductor - known as Truly Devious from the letter they sent - everything they wanted, he didn't get his family back. Iris' body was found washed up days later, and strangely, so was the body of a student, Dolores Epstein, found in a shallow grave in a field. Alice, however, was never found. Stevie is determined to be the one who finally solves the murder. But when the body of a student is found on the school grounds, it looks like Truly Devious may have returned.

I was hugely intrigued by this story! Originally, I loved how Stevie's narrative was interspersed with chapters from the 1930s, from the perspectives of different characters around at the time, when the crime took place. But it takes Stevie quite a while to actually try to start figuring things out, so I had my interest piqued fairly early on, but was then waiting around for Stevie to start doing something. I think I would have preferred for those chapters to begin when Stevie actually starts to think about things now she's there, and has conversations with her friends, so we then got to see what Stevie was talking about. But I was just waiting, and waiting. And to be honest, Stevie doesn't really get started.

Truly Devious is incredibly slow, and in the great scheme of things, barely anything happens. The majority of the story is internal monologue; Stevie thinking about things and trying to piece things together, but failing. And she does very little in the way of actual sleuthing. All these detectives she adores, but she barely gets out there looking for clues, talking to people, investigating. She's just thinking.

And the story is a mystery that gives us no answers. Seriously. Stevie is no closer to figuring out what happened to Iris and Alice Ellingham than she was before she got to the school. And when the student dies present day, it takes a while for Stevie to connect any dots. And even then, the story ends on a cliffhanger that suggests that the answer Stevie does come up with isn't the full picture, so in actual fact, we don't find out anything, really.

Honestly, I feel like reading Truly Devious was a complete waste of my time, and I'm quite glad it only cost me 99p. However, a lot of people really enjoyed this book, so do read other reviews before deciding whether or not you'll read it.

I was so hopeful, based on the description, but this was truly a slog for me. I'm not interested in the remaining books.
It's a cute mystery book. It's definitely has a younger feel to it which I wasn't expecting but I still enjoyed the plot and the character development.
Actual Rating: 3.5 Stars

This book is like an old fleece sweater - its quaint and cozy, but its also got a few holes. Set at a prestigious boarding school in upstate Vermont, Truly Devious is an atmospheric read perfect for the Autumn season. The story itself was an awkward mix of slice-of-life romance scenes and chilling mystery elements that never felt quite as cohesive as I wanted them to be. Overall, it's an excellent choice for any newbies looking to dip their toes into the genre.

THE PROS:
✔ The anxiety rep!
✔ The writing style was fun and quirky
✔ I really enjoyed the flashback scenes to the original 1930s Truly Devious mystery and thought that they were artfully interspersed with the real-time narrative
✔ The atmosphere/setting. GIVE ME ALL THE BOARDING SCHOOLS.

THE WOES:
✖️I just did NOT understand the romance with David at all. Like, there was no build up or tension or....anything. It was strange and I'm confused. Maybe it will feel less clumsy in books two and three?
✖️The ending was so abrupt - I understand that cliffhangers are A THING™, but there was hardly any build-up for this one. It was like the book ended in the middle of a chapter; it felt haphazard and poorly executed.

1. This is definitely not dark academia.
2. I was not amused by the fact that the book ended with a paternity-reveal instead of the murderer-reveal.

Rating would have been 3.5 stars if not for the above.
Format audiobook, enjoyed it very much. Great plot, great characters, awesome !
Read more of my reviews at Cornerfolds.com!

[I don’t know how many of you remember/ know the game where you sit cross legged in front of someone who talks in a soothing tone and leads your shoulders around in a circle & starts out by saying “imagine you’re at the top of a building...”
It ends up with them firmly & suddenly (but slightly) pushing you, where you then had to say what color you saw? (Crazy times as a kid
This was an okay read. I had expected a bit more after the hyped reviews I had listened to. I really enjoyed the school setting of this book and Stevie’s interest in true crime, but I got annoyed by her way of obstructing the validity of the crime scene. It did not fit her all knowing true crime character.

As often in YA books, the characters were again extremely flat. They used one or two characteristics and those were all there was to them. Even the murder mystery did not show another side of the characters, but more a stronger representation of their one characteristic with some additional information that the reader cannot possibly know. Also, I doubt if it is a smart move to make this a trilogy, I had expected some answers after the first book, I was hardly satisfied.

Note, this book has a sudden romance that is just there because hormonal teenagers! I have no idea how that romance happened or why it even was a thing, or how people knew about it, because I as reader wasn’t even aware of it. Did people actually like that part?

A lot of information in the beginning of the book is just thrown to the reader without ever addressing it again. Such as Stevie’s access to the attic, which classes some characters have, and a lot of confusing names that I don’t think ever appear again.

The rest of the book was really enjoyable. The fragments of the past are interesting, the writing style was fine, and the plot seemed to move just fast enough. Except for the pretty rushed ending, because what?
This started off pretty slow, and I wasn't sure about it. But almost halfway through things get I N T E N S E and it's great. And cliffhanger-y.