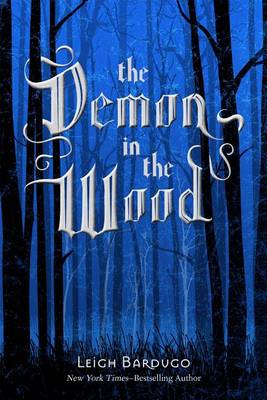 Before he became the Darkling, he was just a lonely boy of extraordinary power. Get a look into the past that forged a brutal and brilliant leader.

The fans of Leigh Bardugo's Grishaverse should make a point of picking up Demon in the Wood. We've all been waiting for this story – we just didn't realize it. Every villain has an origin story. Sometimes those stories are wrapped up in the main plot. Other times they are tucked away, buried under centuries of trauma and history.

The latter is true for the Darkling – the shadow summoner. Even as a young boy, he had taken up (and discarded) many names. All in the name of safety, ironically enough. For the moment, he is Eryk, a Grisha looking for a haven for the winter.

He and his mother have traveled far, hoping to find safety and knowledge. Eryk needs time to master his powers, and that means his mother must keep him safe in the meantime. It's a challenge, given that they live in a world that despises and hunts Grisha.

You know, it never occurred to me that I wanted to see an origin story for the Darkling. I had felt like his backstory was evident enough. Well, evident following everything that happened. But the Netflix adaptation made me realize there was more to be told. Okay, the announcement of Demon in the Wood helped me realize this. I realized that I wanted to learn more about the Darkling's childhood. And boy, did I learn a few things!

Demon in the Wood is a brief look into the life of Eryk. It may only cover a few days of his life, but it goes a long way in helping us understand how he came to be the man we all know (I would say love, but that is only true for some readers).

The storytelling in Demon in the Wood is perfect. Given how much readers already know of this world, there was no need to take us through the Grisha process (or how they're treated). Instead, we're allowed to see it all play out carefully. Painfully.

Naturally, Demon in the Wood does get a bit dark before it concludes. You can even tell exactly how it's going to go. But it's like watching a horror movie – you can't bring yourself to look away. You can only watch in horror, wishing you had been in a position to stop things from playing out this way.

First, let's talk about that cover! Demon in the Wood features a stunning cover. And I'm not just saying that because it has several shades of purple (though that doesn't hurt. If you know anything about the Darkling, it's a pretty evocative cover. You can tell who it is and how old he is (in a general sense) and therefore understand the title's implications.

On the inside, the artist, Dani Pendergast, did a brilliant job of bringing two well-known characters to life. Even with such an age gap, it's clear who they are. I enjoyed seeing the younger versions of these characters. Likewise, it was interesting to see what other characters appeared throughout.

I adore the use of solid colors for backdrops. This wasn't universal for the whole graphic novel, but it did a great job of forcing our eyes to focus on specific scenes or details. This added to the sense of foreshadowing.

I'll say it again: if you love the Grishaverse, you must pick up Demon in the Wood. You don't need to read this graphic novel to understand anything else in the world, but it adds some backstory and context, which alone makes it worthwhile.

Ok let me be honest, the first time I read this I still kind of liked the Darkling, so this story was amazing IMO. Now, five years later, I actually do not like the Darkling anymore at all (I think he's an amazing character, I just really hate him *shrug*) so I couldn't justify giving this novella 4 stars. I've brought my rating down to 3,5. Yeah, it's still a nice story and nice backstory for the Darkling but meh.
Dark & Beautiful

The perfect introduction to our darkling. I only wish that it could’ve been longer and more intensive! More more more! What happened after this? Perfect short story intro to a mysterious and ominous character who seems to show up in the most unlikely of places...
I miss the Grishaverse so much now. I can't wait to get back to it by reading the six of crow series!

This story is my favorite novella so far and I loved seeing some of the other powers and how they work. (I found them a little confusing at times when I was reading the books.)
Blog Twitter Instagram Facebook
This was the first time I'd read any sort of Grisha story that was able to keep my attention for more than a few moments. I would definitely recommend this story to anyone who hasn't read it, especially if you've read the Grisha Trilogy. (I actually read this novella first).