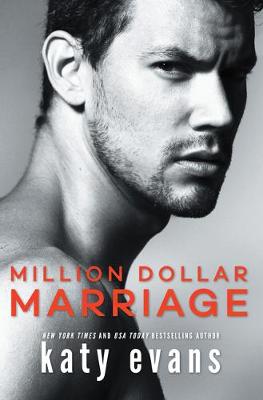 From New York Times bestselling author Katy Evans comes a hot romance about two strangers and their race to fall in love.

If someone had bet Nell a million dollars that she would be saying “I do” to a complete stranger on national television, she’d have called them crazy, but with her crushing student loan payments sending her deep into the red, she’s out of options. This should be nothing more than a business transaction—until she sets eyes on her groom, and everything changes.

The game is on the instant Luke spots Penelope “Nell” Carpenter. He’s out for the money, yes, but getting a little dirty with Nell doesn’t sound too bad either. Everyone knows he’s not the marrying kind, so it’s a good thing it’s just for show. God knows he’s the worst guy his pretty wife should pick for real.

They have nothing in common, but if they want the grand prize, they’ll have to beat out eight other couples. Proving that total opposites attract should be easy enough…as long as they don’t fall in love in the process.

Okay, Million Dollar Marriage didn't quite hit the spot like I hoped it would. Still very enjoyable, but there were several things that just weren't working for me.

I really liked the concept of the game show, more than anything it showed me how different that Luke and Nell were. I actually really liked Luke's character, he's very charismatic, knows when to turn that charm up and I loved seeing his competitive nature come out. He was actually pretty sweet sometimes.

Nell wasn't exactly my favorite character, she was super naive and that point was constantly made throughout the entire story. I really don't want to dissect every little thing that I wasn't a fan of when it came to Nell. Normally, I'm okay with a character being a little innocent, but this was on a whole different level.

Things definitely picked up towards the end and I was completely into everything until it came to the reunion show and everyone learns if Nell and Luke end up staying together. A wee bit dramatic for me.

It was an ok read, book 1 is my favorite in the series.

The narrators were great, I think if it wasn't for Meg and Jacob, I may have struggled with the book a bit.

Million Dollar Marriage by Katy Evans is a tale of a fake marriage, reality TV, and opposites attract! The story is perfect for fans of shows like Love Island, Beauty and the Geek, The Amazing Race, or even the Bachelor-you know, if they got married in the beginning of the show, not the end!  I'm not a fan of reality TV (unless its a prison show-I'm obsessed. Don't judge me), but I thought this book sounded really interesting!

Nell, our heroine, is so relatable to me!! She has a mountain of student loan debt and a serious case of social awkwardness! Also, she is very introverted. But, student loan debt is no joke, so I can totally understand why she was willing to push through her personal struggles and attempt the show. Seriously, I get it. I SO GET IT. Luke is not introverted and not socially awkward. He is trying to save his bar and is just up for anything!

I loved these two together! What started out as a fake relationship in order to get money turns into real feelings. Oddly, it seemed natural. Yes, they are in a completely unnatural situation, but the pressure of competing and being reliant on your "spouse" forced these two to get to know each other. As opposite as they seemed, Luke is perfect for Nell.

Will Wang says, “Teams, you have the choice to participate in the next challenge. If you decide to, you’ll receive a minimum of seventy thousand dollars! All you have to do is say YES!”

Will laughs. “Hold on, buckaroo. There’s a catch you might want to know about. And that brings us to the main premise of the show. John Phillips, are you out there? Please, join me on the podium.”

A man in a suit stands up, and the crowd parts to let him through. He jogs up to the podium, shakes Will’s hand, and stands beside him.

The cameras are focused on our faces, and I know something is up.

“Yes, in fact, John happens to be a justice of the peace.”

The crowd gasps. Next to me, Penny’s body stiffens.

“Yes. In order to participate in the next challenge and any challenges going forward, you and your partner must be man and wife!”

Louder gasp. The screens overhead focus in on the shock of the contestants. Penny’s trembling. Ivy looks pissed. Ace is hurling out f-bombs into the air. The Indian girl has sunk to the ground and is covering her face in her palms. It’s chaos.

“You will need to spend the rest of the time living with your partner as a unit. You’ll do everything together for the duration of the contest. There will be challenges that test your endurance, your strength, and your ability to work together as a couple. If you win, you’ll each get two hundred and fifty thousand dollars and the opportunity to have the marriage annulled, should you choose. BUT, if you decide to stay together as lawfully married, you’ll together receive the grand prize of ONE MILLION DOLLARS and an all-expenses-paid honeymoon package!”

I look around. All the couples are yin and yang. It’s like they ran our personality tests through a machine and picked out the person we’d be least compatible with.

“Now, we understand this is a big commitment on your part, so we’ll give you and your partner five minutes to talk things out and decide what you’d like to do. Please note that once your decision is made, it is final, and you will be married here, on the spot, before you board a flight to where the real competition will begin.” He winks at the losers’ wall. “If you drop out now, you’ll go home with fifty thousand dollars, but if you decide to continue on, you’ll earn seventy thousand and the chance to compete for even more! Time starts . . . now!”

She doesn’t say anything.

I wave a hand in front of her face.

“Are you crazy?” she finally says, staring at me. “I’d never marry you.”


Meet the Million Dollar series books. Books that are all about passion, romance, and all about what people will do for money—actually, a LOT of money. In book one, Million Dollar Devil, we have a sexy, raw, bad-mannered daredevil willing to pose as a sophisticated rich guy – while skillfully seducing the heroine in the process.

In book two, Million Dollar Marriage, Nell and Luke both agree to become contestants in a reality show that requires—gasp, marriage. Marriage to a complete stranger, which is appalling. But, it’s a fake marriage, right? It doesn’t matter that they are complete opposites. Nell will be the brains, and Luke will be the brawn. For a moment there, they both think they’ve got it covered. But the challenges end up being far more than they anticipated, especially the unexpected challenge of resisting falling in love with each other.

I’d always wanted to write a reality show book. I mean, reality shows are so addictive to watch, but though I’ve loved indulging in binge-watching Survivor or The Amazing Race, I’ve always wanted a little more romance to go with all that adrenaline and excitement. What happens when you’re put under all that pressure, and aside from that, have just met a person who gives your heart wings? Let’s face it. Falling in love is a little scary when you do it privately, so how does the public nature of a relationship hinder or help the romance between two strangers?

Well, in Nell and Luke’s case, being exposed to the cameras all day, every day, was more of a hindrance. And yet without those cameras, would they have given each other the time of day to begin with? :)

I would totally write another reality TV show romance. It’s been one of the funnest, most uniques writes I’ve ever written to date.