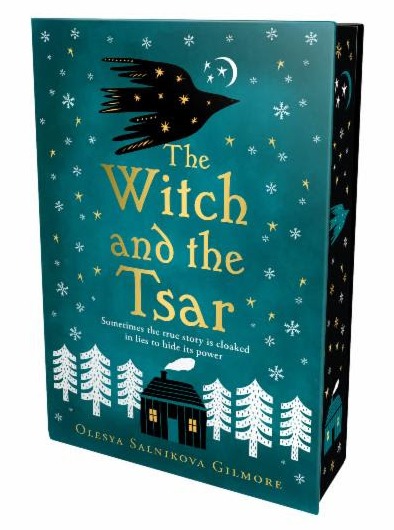 ‘A delicate weaving of myth and history, The Witch and the Tsar breathes new life into stories you think you know’ Hannah Whitten, New York Times bestselling author of For the Wolf

Yaga lives deep in the Russian forest, tending to any that call upon her for her healing potions and vast wisdom.

She has been alone for centuries, with only her beloved animals for company. But, when Tsaritsa Anastasia, wife of Tsar Ivan Vasilyevich, shows up at Yaga’s cottage on the brink of death, Yaga is compelled to travel with her to Moscow to keep her safe.

However, the Russia Yaga sees as she makes her journey to the heart of the country is one on the brink of chaos. Tsar Ivan – soon to become Ivan the Terrible – grows more volatile and tyrannical by the day, and Yaga believes the tsaritsa is being poisoned by an unknown enemy. But what Yaga cannot know is that Ivan is being manipulated by powers far older and more fearsome than anyone can imagine.

Set in sixteenth-century Russia, The Witch and the Tsar upends the stories we know of Baba Yaga as the bony-legged witch of Slavic fairy tales and the stuff of nightmares. For beyond the rumours of her iron nose, fangs for teeth, and house on chicken legs, is the story of a woman so wise and strong that she has to be cloaked in lies to hide her true power.

Goldsboro Books GSFF pick for January 2023. This edition is signed, numbered, with a digitally sprayed edge, head and tail bands, a ribbon bookmark, and foil on the boards.

The Witch and the Tsar is a beautifully creative fantasy retelling of the Baba Yaga story reimagined for modern readers by Olesya Salnikova Gilmore. Released 20th Sept 2022 by Penguin Random House on their Berkley Ace imprint, it's 432 pages and is available in hardcover, audio, and ebook formats. It's worth noting that the ebook format has a handy interactive table of contents as well as interactive links. I've really become enamored of ebooks with interactive formats lately.

I was immediately struck by the lushness of the prose. The author (this is apparently a debut novel) has such a facility with settings and descriptions. The writing isn't overwrought and didn't devolve into preciousness once, but it is perfectly balanced and enchanting.

Baba Yaga is a demi-godess who lives alone and helps those who seek her. When Ivan the Terrible's wife Anastasia seeks her out, Yaga finds herself caught up in much larger supernatural forces at play as she tries to save the heart of medieval Russia.

Four and a half stars. Beautifully written and captivating. Although it's not in any way derivative, some of the writing reminded me of Jane Rosenberg LaForge whose retelling of Bearskin was also wonderful.

You guys know that I'm a sucker for mythology stories. Better yet, I love trying new authors, so when I saw The Witch and the Tsar by Olesya Salnikova Gilmore, I knew I had to give it a chance. Did I mention that this is a retelling of Baba Yaga? Yes, please!

Baga Yaga's story has been told many times in many ways. Here, she is a half-goddess full of magic. She infamously lives in a hut in the woods, trying to avoid people (and the cause of all her pain). Yet even she can't ignore the pleas from her sick friend, Anastasia.

Anastasia is the wife of the tsar, and she is very ill. It's the sort of thing that only Baba Yaga may be able to deal with. Only...things are much more complex, and it turns out that the illness has a very human source.

I have always been fascinated by tales of Baba Yaga, so when I was promised a retelling of her story with a few unique twists, I couldn't wait to dive into it! The Witch and the Tsar is a magical and sometimes dark tale, portraying a slightly more human version of the character we all know, love, and fear.

Admittedly, the Baba Yaga in this tale is not the one I was expecting. I was fine with it, as it was clearly Olesya Salnikova Gilmore's interpretation of the character. But staunch fans (and folklorists) may be upset about the deviations. So do consider yourself warned.

The thing I loved the most about The Witch and the Tsar is that it gave Baga Yaga a voice. So often, I feel like characters like this are shuffled into tropes (in folklore) and not allowed to explore deeper concepts. So this was very much a refreshing change.

There were plenty of elements to appreciate in this novel, magic, politics, emotional twists, etc. I can't comment on the historical accuracy (I'm trash at remembering historical facts, sorry), but I did enjoy The Witch and the Tsar.

Thanks to Ace and #NetGalley for making this book available for review. All opinions expressed are my own.

When I first came across The Witch and the Tsar in the releases for this year, I had a feeling it was going to be something special and Gilmore does not disappoint.

It is at it's core, a historical fiction fantasy based around some 'what-if' scenarios with the Romanov family, following the path of the folklore legend, Baba Yaga. The immortal witch is nothing like the hideous descriptions she's known as and Anastasia, now all grown up with a family of her own, is everything the hearts of those who deify her believe she could have become.

Yaga is a strong, genuinely independent female protagonist, who manages to wield power with empathy and kindness and still come across as someone who can hold their own in most situations. She's indelibly human, despite being a demi-goddess.. capable of mistakes that are all too relatable, but she learns and adapts, persevering throughout them.

Gilmore paints a stunning picture of both the beauty and brutality of sixteenth century Russia. From the architecture of old Moscow to the trenches of what is ultimately civil war, her prose is eloquent, yet not overly flowery. There's a coolness to the Eastern European storytelling style that I just love, which tends more toward the discussion of feelings than the dramatic expression of them. There are moments of course, where both occur, but I find the former to make the latter far more impactful than in a story where the main character is constantly on an emotional rollercoaster.

The magic system is creative and diverse. That which seems good or evil might simply be leveraged in some way, as the development of even many of the briefest meetings we get with characters is rich with substance and vitality.

I absolutely loved this book. If you like complex layered storytelling, characters that aren't always what they seem, dark fantasy, and Slavic themes.. give this one a try. You'll be glad you did.

The Witch and the Tsar (1 book)