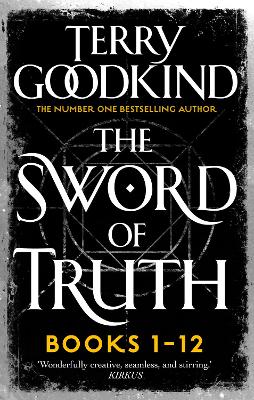 'There are only so many ways of heaping praise on a series that gets better and better.' SFX

'Everything one could ask for in an epic fantasy.' PUBLISHERS WEEKLY

'A phenomenal piece of imaginative writing, exhaustive in its scope and riveting in its detail.' PUBLISHING NEWS

The Sword of Truth series follows Richard Cypher, a young woodsman intent on tracking down his father's murderer.

His quest will take him far from home, embroiling him in an ancient war, three-millennia past, that is about to re-ignite with world-shattering violence.

Here, you can read books 1–12 in Terry Goodkind's epic bestselling series. Including:

BLOOD OF THE FOLD

TEMPLE OF THE WINDS

SOUL OF THE FIRE

FAITH OF THE FALLEN

THE PILLARS OF CREATION