Bachelor Bosses: Boardroom Antics: Undone by His Touch (Dark-Hearted Tycoons) / Secrets of a Powerful Man / Seduced by the CEO 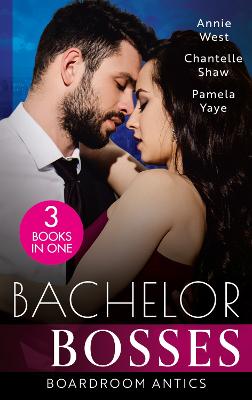 Bachelor Bosses: Boardroom Antics: Undone by His Touch (Dark-Hearted Tycoons) / Secrets of a Powerful Man / Seduced by the CEO

Declan is a man in torment, consumed by guilt. Only one thing drives him: finding the woman who caused his brother’s death and the accident that took his sight. Housekeeper Chloe Daniels refuses to pity her devastatingly gorgeous boss, but as she falls deeper under Declan’s spell, awakened by his touch, she forgets all about the secret she keeps that may destroy them both…
•
Salvatore is haunted by the accident that left a blank in his memory. His young daughter is the one bright light in his dark existence, and he’ll do anything for her…even if that means moving a delicious temptation under his roof! Darcy Rivers can’t refuse Salvatore’s proposal. But the closer she gets to this powerful man, the closer he gets to uncovering her secrets!
•
All the things money can buy are at world-famous restaurateur Nicco Morretti's fingertips. But he knows he's met his match when he encounters feisty Jariah Brooks, who is unlike any woman who's ever tempted him before. She’s a spirited single mother and his new employee, but he's craving to get to know her on a personal level…