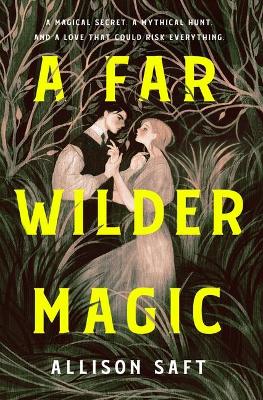 "An utterly transportive read, unfolding into a world of crumbling manors and ancient forests. Allison Saft crafts a deliberate, intricate romance that will have you as unmoored as the characters." - Chloe Gong, New York Times bestselling author of These Violent Delights

A romantic YA fantasy perfect for fans of Erin A. Craig and Margaret Rogerson, about two people who find themselves competing for glory - and each other's hearts – in a magical fox hunt.

When Margaret Welty spots the legendary hala, the last living mythical creature, she knows the Halfmoon Hunt will soon follow. Whoever is able to kill the hala will earn fame and riches, and unlock an ancient magical secret. If Margaret wins the hunt, it may finally bring her mother home. While Margaret is the best sharpshooter in town, only teams of two can register, and she needs an alchemist.

Weston Winters isn’t an alchemist--yet. Fired from every apprenticeship he's landed, his last chance hinges on Master Welty taking him in. But when Wes arrives at Welty Manor, he finds only Margaret and her bloodhound Trouble. Margaret begrudgingly allows him to stay, but on one condition: he must join the hunt with her.

Although they make an unlikely team, Wes is in awe of the girl who has endured alone on the outskirts of a town that doesn’t want her, in this creaking house of ghosts and sorrow. And even though Wes disrupts every aspect of her life, Margaret is drawn to him. He, too, knows what it's like to be an outsider. As the hunt looms closer and tensions rise, Margaret and Wes uncover dark magic that could be the key to winning the hunt - if they survive that long.

In A Far Wilder Magic, Allison Saft has written an achingly tender love story set against a deadly hunt in an atmospheric, rich fantasy world that will sweep you away.

I've been meaning to check out Allison Saft's writing for quite some time. Naturally, that meant I jumped at the chance to read her latest novel, A Far Wilder Magic. It's the best kind of young adult fantasy, and I just can't get enough of it.

Margaret Welty was lucky enough to see something that most people would only ever dream of the legendary hala. Unfortunately, she knows that the hunt will soon follow in the hala's wake. That is what happens.

Thus, Margaret decides to hunt the hala herself, for succeeding would change her life forever. It would give her family the money they need, buy a home, and so much more. There's just one catch – she needs an alchemist to help. Enter Weston Winters. While he isn't a fully-fledged alchemist, he is Margaret's best chance at success.

“The more dangerous the monster, the more glorious the hero who slays it.”

A Far Wilder Magic is a truly stunning read. I had so much trouble picking a favorite quote to highlight from this novel, as there are so many that I will cherish. The writing itself is beautiful, and the words powerful – especially when backed by a story such as this.

The thing that hit me the hardest about A Far Wilder Magic is well – the emotional side of it. It's weighted and isn't willing to pull punches, creating a compelling story that tugs on the reader's heartstrings. It's a lot – and I wouldn't have it any other way.

The novel is split into two perspectives, Maggie and Wes. Switching back and forth between the two not only gave us a solid idea of the world – but a view of their budding relationship. Either perspective could have carried the story and made it enjoyable, but together they took it to a whole new level.

If you're looking for a fantasy read with an emotional plot and characters that feel like they could walk right out of the pages, then please consider reading A Far Wilder Magic.

Thanks to Wednesday Books and #NetGalley for making this book available for review. All opinions expressed are my own.

Thank you so much to the publisher and to NetGalley for this arc.

Super excited to get my hands on this one. And quite frankly I’m torn about this one.

In a way, it’s a bit like historical fantasy. It’s set against the backdrop of religious persecution and politics.

Maggie Welty is a child of a famed alchemist whose been abandoned by her mother. She’s stuck taking care of the worn down manor when she meets Weston Winters. Winters is desperate for an alchemist apprenticeship to help his family. So he makes a deal with Maggie to participate in the hunt for the wild Hala.

It’s a slow burn romance the kind that makes you scream “GET IT TOGETHER! KISS HER”. It’s also full of magic. The struggles each of the characters have really make the story. Their different family dynamics and the way they’ve handled their struggles is great. It’s definitely very teenage angsty.

I think I struggled with the historical aspect of it. And the religious side of it as well. I’m not entirely sure I enjoyed it. But I loved the concept of the hunt that kept me reading. And the writing I found was beautiful. Saft creates such a eerie setting and I found myself rooting for the two characters through it all.