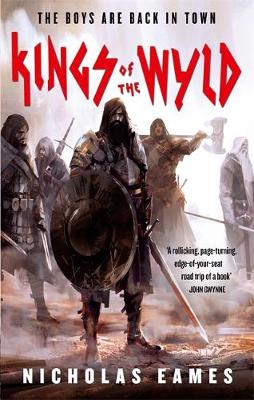 A retired group of legendary mercenaries get the band back together for one last impossible mission in this award-winning debut epic fantasy.

Clay Cooper and his band were once the best of the best, the most feared and renowned crew of mercenaries this side of the Heartwyld.

Their glory days long past, the mercs have grown apart and grown old, fat, drunk, or a combination of the three. Then an ex-bandmate turns up at Clay's door with a plea for help -- the kind of mission that only the very brave or the very stupid would sign up for.

It's time to get the band back together.

Hardcover exclusive to Anderida Books. Limited to 350 signed and numbered copies, with the map printed on the end papers.

Hilarious and so much fun! Great cast of characters.

When we seek to rule only ourselves, we are each of us kings.

Filled with blood, guts, and a surprising amount of heart, this is everything a fantasy book should be. I loved this epic adventure: even more so, because the characters were long past their glory days. I guess you’re never too old to be a hero.

Having settled down with his family, Clay has no intention of getting sucked back into the life of a warrior. But when his best friend asks for help rescuing his daughter from the midst of a besieged city, Clay rushes back into the fray. Before attempting to brave an entire army in an ill-advised rescue attempt, Clay “Slowhand” and his friend Gabe, have to gather their old band back together, which proves to be more a journey than you’d think.

The writing in this book is fantastic! The battle scenes, while many, never became “same ‘ol, same ‘ol”. I was surprised by how different each fight scene was from the others. I know that sounds like a weird thing to write about, but as a reader of fantasy, I’ve often found myself getting bored by the similarity between different fight scenes in a book.

If the battles were interesting, that’s nothing compared to the characters. I loved every single one of them. My favorite is a toss-up between Clay and Ancandius Moog, the band’s wizard. Moog was so kind-hearted! He was also a bit of a hit-or-miss wizard: sometimes he was incredibly useful…other times, not so much. Part of his background was tragic and sad, which only led to stronger character development.

Clay was wonderful in every aspect. It’s rare that I like a main character as much as I liked Clay. Because they’re often tasked with moving the story along, I tend to find them annoying (I’m looking at you, Harry Potter). But Clay was a loyal friend, and someone who did what was right even when it wasn’t easy. I loved his wry sense of humor, his realistic viewpoints, and his tenacity. I also loved his giant shield.

I guess it’s pretty obvious at this point that there isn’t a single thing that I didn’t love about Kings of the Wyld. Every fantasy reader needs to pick this book up.

https://wittyandsarcasticbookclub.home.blog/2019/08/01/kings-of-the-wyld-by-nicholas-eames/
This book is pretty hyped up so I went into it expecting it to be good but not as great as everyone was making it out to be. Hyped books are often that way. I was wrong, this book is amazing. So amazing that I have actually ordered deadtree versions of this and Bloody Rose.

At one point, fairly early on, a certain sequence of events (they use the mirror and Moog throws the phylactery) had me laughing so hard I was actually crying. But not only that, I would be laughing, I would look away from the book to calm myself, then I would attempt to read again but would fail and break down into laughter. This went on for over 10 minutes, maybe even up to 20 minutes. It was getting late at night and my kids were asleep, so I was trying my best to be quiet as well. So there I was for like 20 minutes crying and choking near to death on my laughter. At what is admittedly juvenile humour. It was pretty bad, I probably looked like a lunatic.

It wasn't the only laugh out loud moment either. And I mean actual real out loud, not like social media "lol" but real loud laughter. It's been a long time since I read a book that made me laugh like this one did. I mean sure I have read several funny books, but most of the time they were quietly amusing and made me smirk at the satire or references. This one wasn't quietly amusing, it was loudly hilarious. And I even missed most of the references because I am an 80s baby and didn't recognise most of the band names and other stuff. Still funny despite being, I assume, constantly whooshed.

But there were many a serious moment too and I found I actually cared enough about the characters to get teary at several of those serious moments. This is good, sometimes funny stories don't really make you feel much for the characters except amusement. But not this one, I cared, I felt sad for them, I sympathised and empathised, I even felt the sting of betrayal and shock.

Shout out to Lady Jain who is fantastic, so amazing, I wish Eames would write a book about her. And can I gush for a second over Clay's daughter and her frogs. But what is with the frog that has wings? Not that the idea is absolutely terrifying or anything.