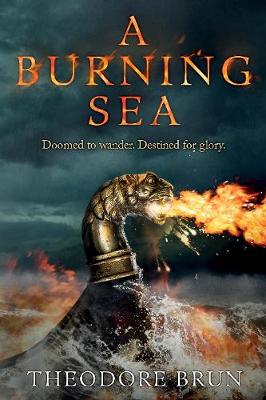 'Superb. A Burning Sea is a vivid, enthralling read, yet again proving that Theodore Brun is a force to be reckoned with.' Giles Kristian

Doomed to wander. Destined for glory.

Erlan Aurvandil has turned his back on the past and his native Northern lands, taking a perilous journey to the greatest city in the world, Byzantium. But as his voyage ends, Erlan is brutally betrayed, captured and enslaved by a powerful Byzantine general.

Meanwhile, Lilla Sviggarsdottir, Queen of Svealand, has lost her husband and with him, her kingdom. Leaving her lands and people behind, Lilla journeys east on a new quest: to find Erlan and raise an army mighty enough to defeat her usurper.

But when she reaches the great city of Byzantium, she discovers a place in turmoil. A dark tide is rising against the Emperor from within his own court. As the shadows darken and whispers of war begin to strengthen, Erlan's fate becomes intertwined with that of the city. Are they both doomed to fall, or can freedom be won in the blood of battle?

Signed and numbered - limited to 150 copies.