Dark Blade (Whispers of the Gods, #1) 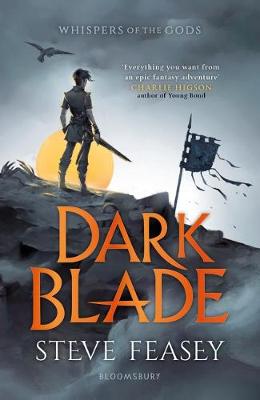 Dark Blade (Whispers of the Gods, #1)

‘This has everything you want from an epic fantasy adventure – devious Gods, hideous monsters, a portal to another dimension and a hero with an enchanted blade. Great stuff’ – Charlie Higson, author of the Young Bond series
_________________________

WHEN GODS FAIL, WHO WILL KEEP THE DARKNESS OUT?

Lann knows nothing of his mysterious past, but by his fifteenth birthday he will come face to face with destiny. For Lann must wield the Dreadblade, an ancient sword forged to defeat terrible monsters.

Across the mountains a King has been murdered. His daughter, Astrid, is a warrior with no desire to bear the crown. Only she can uncover her father’s killer before her brother is framed for the crime.

Evil is stirring. Lann and Astrid are the kingdom’s last defence. Together, they must face the greatest darkness their world has ever known.

The Dreadblade speaks the language of the old Gods, a weapon forged to eradicate monsters and evil from the world. Once wielded to destroy the darkness brought upon the world, a warrior consumed by the power of the black sword attempted to kill the gods, drowned for his bloodthirst and greed.

Lannigon Fetlanger is a farm boy but rather than working the land, Lannigon immerses himself in books, knowledge instilled in him by his late mother. Since her passing, Lannigon's father has becoming increasingly volatile, a drunkard who mourns his wife after she passed giving birth to his stillborn son. When his father is slaughtered by a monster, Lannigon barely escaped with his life, losing his sight during the attack as he lay crumpled on the forest floor.

Lannigon is taken in by Fleya, a witch versed in old magik and craft, teaching the now vision impaired boy about botany. Lannigon seeking solace in the rich earth tending to his seedlings. As Fleya is needed in a neighbouring town, Lannigon is awoken by a man offering to restore his sight if he chooses to wield the blade drenched in blood, a weapon as fierce as it is frightening and Lannigon agrees to the offer.

Lannigon Fetlanger is an intriguing young man, gentle and considerate, still grieving the loss of his mother. Escaping the monster who slain his father, Lannigon falls and a sharp blow to the head results in his vision impairment, engulfed by darkness as he finds himself alone. Fleya is a witch and healer, tending to the local community with her homegrown medicinal elixirs. She offers to take Lanningon in while farmhands manage the family farm, teaching him about botany and how to care and grow ingredients within her small garden. Seeking solace in the rich soil, Lannigon feels at ease within the her presence and although Fleya appears to be a youthful and beautiful woman, it isn't until he takes possession of the Dreadblade that he sees the world for what it truly is, Fleya included.

The Dreadblade itself has a long, sorrowful history. Forged and last wielded by a man who had planned to kill the Gods, Lannigon unaware of the blade's history upon accepting the position of sword keeper, the Dreadblade is bloodthirsty and acts of its own accord. A war is brewing, a thin veil separating Lannigon's world and a world of hideous monsters unleashed by a mere boy, a young man determined to make the world suffer for his own grief and the hand he's been dealt. Dabbling in necromancy and dark magik.

Across the Kingdom, the King has been slain. Astrid Rivengeld is the daughter of the slain King, her brother ascending the throne until he is held captive, assumed responsible for the death of their father. Astrid has no desire to attend court as a Princess, she's a Shield Maiden and the first royal of her kind. Sharing the same goal as Lannigon and along with Fleya, the three set off across the Kingdom to save the throne and stop the rift into the netherworld from opening. I loved Astrid, such a formidable young lady and although her character is a stark contrast to Lannigon, the two compliment each other wonderfully and forge a tentative friendship.

Dark Blade draws upon the Viking civilisations and mythology, fictional Nordic Gods and monsters crossing a divide between worlds. The world was beautifully imagined and wonderfully portrayed. Absolutely loved it!

Whispers of the Gods (2 books)