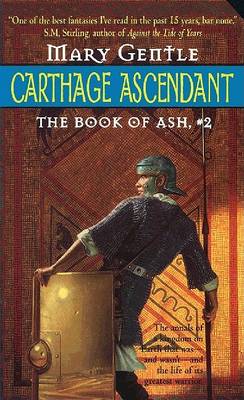 There Is More Than One History Of The World

In a brutal age of bloodshed and miracles where dark sorcery has extinguished the sun, the fate of Western Europe, Africa--and perhaps all the world--rests in the hands of a warrior woman named Ash.

The undefeated legions that are the army of Carthage rampage across the kingdoms of Europe. Beneath a sunless sky, Burgundy alone stands in the path of the Visigoth horde and their legendary slave general, the Faris. Deep in enemy territory lies a living stone idol of frightening power that must be destroyed if anyone is to survive, a being that whispers in Ash's soul, that has guided her through every military campaign, that only she and her enemy--her twin--can hear.

But there is an even greater evil that lurks at Carthage, one that created the stone idol and shaped Ash's existence. It plots with deadly purpose the final annihilation that will wipe Burgundy from the face of the earth. For Burgundy lies at the heart of it all--the richest prize in Europe and the key to the world--the jewel of the Carthaginian campaign.