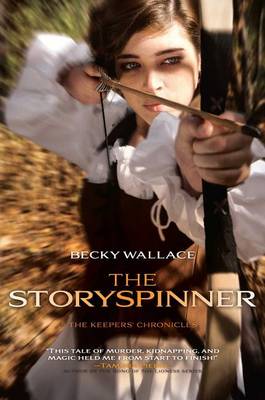 Drama and danger abound in this "intricately woven" (Shannon Messenger, author of the Sky Fall series) fantasy realm where dukes play a game for the throne, magical warriors race to find the missing heir, and romance blossoms where it is least expected.

In a world where dukes plot their way to the throne, a Performer's life can get tricky. And in Johanna Von Arlo's case, it can be fatal. Expelled from her troupe after her father's death, Johanna is forced to work for the handsome Lord Rafael DeSilva. Too bad they don't get along. But while Johanna's father's death was deemed an accident, the Keepers aren't so sure.

The Keepers, a race of people with magical abilities, are on a quest to find the princess-the same princess who is supposed to be dead and whose throne the dukes are fighting over. But they aren't the only ones looking for her. And in the wake of their search, murdered girls keep turning up-girls who look exactly like the princess, and exactly like Johanna.

With dukes, Keepers, and a killer all after the princess, Johanna finds herself caught up in political machinations for the throne, threats on her life, and an unexpected romance that could change everything.

This review can also be found at my blog, There were books involved...

THE STORYSPINNER was an absolute delight -- and it was a total surprise to me. It wasn't even on my radar until a couple weeks before it came out! To be honest, I'm a little wary of starting new series lately, but right around its release date, there was quite a bit of talk on Twitter about it, so I thought, What the heck, and put it on hold at my library. Aaaaand then I read Brittany's review, and that sealed the deal. I needed it. The wait while my library took its merry time processing this book killed me. But finally, my hold came in, I picked it up, and I absolutely devoured it.

There were so many things about this book that I absolutely loved. The worldbuilding, the characters, the plot, the pacing, the writing, the romance(s!)... Everything was just done so well. THE STORYSPINNER was one of those books where it actually hurt when I had to set it down. (Full disclosure - I stayed up till midnight two nights in a row, reading this (that never happens) - the first night because I was doing the "just one more chapter..." thing, and the second night because I NEEDED TO FINISH IT, IT WAS JUST GETTING TOO INTENSE.)

I think THE STORYSPINNER is the ideal example of my perfect "lighter" YA fantasy. And when I say "lighter", what I mean is... It's not super dense, or overly dramatic, and the writing isn't flowery for the sake of being flowery. It is super engaging -- the writing flows really well, and simply carries the story instead of making itself into a Thing. I feel like there's a place for dense fantasy, and a place for lighter writing, and this story truly benefits from the lighter side of things. It lends itself to an action-packed, fast-paced story, without sacrificing things like worldbuilding or character development.

But, please don't misunderstand when I say it's "lighter" fantasy... I don't mean it's all happy and fluffy. THE STORYSPINNER didn’t pull punches, and there were definitely moments of heartbreak. But honestly, I appreciated those. With a lot of YA books, everything turns out perfectly fine for most of the characters in the end, and... it can be a bit unbelievable. It also makes it feel like the stakes aren't truly as high as they were be made out to be. But the stakes in THE STORYSPINNER are definitely high, and stuff definitely happens that is Not Good. So. Don't let that stop you from reading it, because it's wonderful, but don't say I didn't warn you.

As for the worldbuilding, THE STORYSPINNER is high fantasy, which usually means some sort of medieval English influence, right? Nope. This book is set in a world heavily influenced by Portugal and Portuguese culture. How awesome is this?! I've read a lot fantasy, and I've never encountered one with these sorts of influences before. I adored the setting, and the Portuguese-inspired names and culture. This world felt vibrant and cohesive, and I loved it. The magic system is also pretty cool -- it's not a Huge Deal, which was nice for a change. It just felt like something that was fairly straightforward and worked really well in this story.

But my favorite thing about THE STORYSPINNER, unsurprisingly, was the characters. I say "unsurprisingly" because by now, I'm sure you know that characters are the be-all and end-all of whether I'll love a book or not. And my 4.5-star rating, by itself, is a pretty good indication that I loved the characters.

And holy wow, there are a lot of characters. THE STORYSPINNER basically follows two groups of people. There's Jacaré, Leão, Pira, and Tex, who are on a mission to find the missing heir to the throne of a neighboring kingdom, Santarem. Then, within said neighboring kingdom, there's Johanna, who's trying to help her mother and three brothers get by after her father's death. After being mistaken for a poacher on Lord Rafael's lands, one thing leads to another and she ends up landing a position as a Performer (singer and Storyspinner) at Rafi's estate. ...And yes, all of these characters get POV chapters.

Holy crap! I hear you exclaim, How/why/how do all these characters get their own POV's?! Fear not, dear reader -- because it is done incredibly well. For one thing, there's really only two "threads" to the plot, so even though we're getting POV's from tons of characters, they're part of only one of two sides to the story. And for another thing, these characters are fantastic. Each and every one of them has a unique perspective, they're immediately engaging, and I was never bored with any of them. How often do we read books with switching POV's and want to jump back to our favorite? All the time! Well not with this book. I was equally absorbed by every single POV, and that is not an easy task to accomplish. (It wasn't just the POV characters who were great, though, either. Johanna's three brothers, and Rafi's brother Dom, were also stand-out characters for me. I loved them to pieces.)

But with alllll these characters comes the potential for some romance... and boy oh boy, did I love THE STORYSPINNER's romance(s!!). There are two main ones, only one of which I'm going to talk about because I feel like this one is the expected one -- Rafi and Johanna. YOU GUYS, THESE TWO. I SHIP THEM SO HARD. They ticked so many of my "OTP" boxes - he mistook her for a boy the first time they met; there's the obvious class difference (which I like seeing explored); they do not get along at first, but obviously enjoy verbally sparring with one another; they have to ""pretend"" (can I add enough quotation marks around that word?) to like each other for a while... Just. EVE.RY.THING. And it doesn't help that the two of them are such strong characters on their own. Johanna is fierce and determined and driven to help her family; Rafi is a bit closed-off but truly has a heart of gold and an incredible sense of responsibility and honor and... I just... ugh. I fell pretty hard for Rafi.

And as for the other two romances -- one is super sweet and less a romance than just an adorable crush, but the other is definitely a romance and holy crap I really really ship them, too. There are just a lot of ships and I love shipping okay leave me alone.

One tiny, tiny nitpicky thing for me was that it sort of ended on a cliffhanger, one of those mid-scene types -- however, the plot was pretty wrapped up by that point anyway, and as things stand at the end, events are just kicking off for More Excitement To Come. So, really... I can't complain too much about that.

THE STORYSPINNER has so many awesome things going for it. I LOVED THE ROMANCES--obviously. I was super impressed with how the story and world felt fresh and exciting and believable. And most importantly, I found the main characters to be compelling and engaging and worth caring about.

So, yeah. If you're looking for your latest fun-but-also-feelsy, can't-put-it-down, OTP's-for-days YA fantasy... this is it. I highly recommend it. You really can't go wrong.

There were books involved...
Objectively speaking, there’s no way that Storyspinner could have earned a four star rating from me. The grounding still needs work, the world building insufficient, some of the characters are underdeveloped and the plot simplistic. But Becky Wallace’s storytelling hit all the right spots for me so I wasn’t able to stop myself from being generous. I didn’t regret giving away my four stars.

Storyspinner immediately hooked me from beginning to end. I couldn’t remember a single moment that I got bored or getting annoyed about this or that. 2015 made for a lot of disappointing reads that reading Storyspinner was a very nice change. The story was nicely paced. The multiple POVs really worked for me. The characters, even the underdeveloped ones, managed to grab a place in my heart. I can feel the chemistry of the characters with one another that it’s almost tangible. I can’t wait for the Keepers and the de Silva’s to work together to ensure Johanna’s safety. The plot, though simplistic, still managed in capturing my attention. The ongoing romances between Rafi and Johanna, and Leao and Pira were believable and didn’t feel intrusive.

I didn’t know how Wallace managed to write a story that is far from perfect and yet, was still able to leave a mark in your heart. True, there are still a lot of things that needed to be understood about the lives of the Keepers and the plot needed more layering and intrigue to convince the readers that a massive-war-that-will-cost-millions-of-lives is going to happen if the Keepers fail to haul the lost princess’ ass to the wall. But that’s alright with me as long as the author will find the time to make the story more grounded and mentally appetizing in the second book of the series, Skylighter.

All in all, the Storyspinner is in the right path. Beautiful execution, pleasant delivery, and charming story telling. I am looking forward to reading the next book in the series.