Last Call at the Nightshade Lounge: A Novel 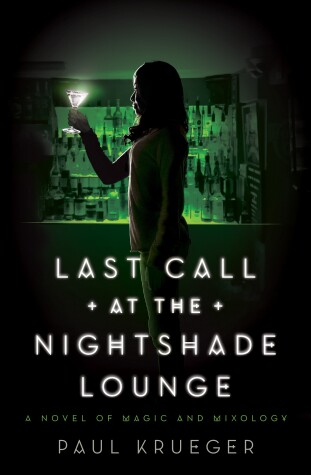 Last Call at the Nightshade Lounge: A Novel

College grad Bailey Chen has a few demons: no job, no parental support, and a rocky relationship with Zane, the only friend who's around when she moves back home. But when Zane introduces Bailey to his cadre of monster-fighting bartenders, her demons get a lot more literal. Like, soul-sucking hell-beast literal. Soon, it's up to Bailey and the ragtag band of magical mixologists to take on whatever-or whoever-is behind the mysterious rash of gruesome deaths in Chicago, and complete the lost recipes of an ancient tome of cocktail lore. Quirk Books is well known for their best-selling series Miss Peregrine's Home for Peculiar Children and for Pride and Prejudice and Zombies, which led the way in the creation of mash-up fiction. Both titles will shortly be released as films.

Simply put, this book was FUN.

A little bit Harry Potter and a little bit Buffy The Vampire Slayer. Except it isn't vampires they are slaying, and the Slayers are bartenders that make magic cocktails that give them superpowers to slay demons.

I mean COME ON, who cannot love such a premise. The plot flowed nicely. It had some interesting World building. The characters were likable (if sometimes cliché). I also really enjoyed the between entries from the "Devil Water’s Dictionary" the fictional mixologist’s guide that the bartenders used for mixing their magic drinks.

Really just an enjoyable read from beginning to end.

Source: ARC from the publisher.

Last Call at the Nightshade Lounge brings readers into a fierce urban fantasy world where demons roam the nighttime streets and only magical bartenders can stop them from devouring passing humans. An original premise, where cocktails are magic and bartenders are heroes, helps bring Krueger's vision of Chicago to life, while silly banter among the main characters keeps the story from being too dark.

The book is being marketed as new adult, which to me means very little besides the fact protagonist Bailey is a recent college graduate. The book tries its best to make her relateable: She has a hard time finding a job that fits her degree, her parents nag her about when she's going to get a "real" job, and she blunders a bit figuring out how all this adulting stuff works. However, her experiences are certainly not going to feel universal. She went to UPenn, she appears to have no student loans, and, well, she gets the whole demon-hunting job thing to fall in her lap and help her check off the "find a worthwhile career" box. I appreciate the efforts to make Bailey likable and a realistic portrayal of at least someone's experience of being a recent college grad, but I also felt as if the author was visibly aiming for a new adult vibe with the writing and could almost see the places he thought, "Now, THIS is something a new adult would say. Let me add that in." Basically, I wish the execution of it all came across as a bit more natural.

I did enjoy some of Bailey's character arc, however, including her dilemma about how to treat Zane.  They share some complicated history from high school, and Bailey has to figure out how to deal with that, especially considering that Zane seems to have changed since she last saw him four years ago.  That, to me, was possibly the most relateable part of her experience.

Plot-wise, the book does some cool stuff with cocktails and magic.  Different alcohols and drinks produce different effects. It could have been interesting to explore some more of the subtleties--especially as Zane mentions his interest in magical theory several times--but the characters appear to choose drinks at random and then battle the demons with whatever powers that drink gives.  There's very little thought put into what drink might be a better pick. As someone who reads a decent amount of detailed high fantasy, I would have loved to see more of the strategy behind all the magic.  However, I was delighted by the cocktail recipes interspersed between chapters, which do give readers a glimpse into historical theory.

The demons are not really the main draw of the story either, though they are certainly creepy: disgustingly ugly and intent on sucking the animus out of unsuspecting human. (Actually, I'm not sure why the characters weren't more scared of these things because they seem to know Latin, and animus means something like soul/spirit/will, which certainly doesn't sound like something I'd want to lose.   The characters seemed to take it as just as esoteric term for life, though.) However, there's actually a larger, overarching plot, and the demons are more like the harbingers or greater evils to come.  On one hand, that's epic.  On the other hand, I thought the demons could have used a little more development.

I liked a lot of the elements of Last Call of the Nightshade Lounge, and would have loved to see them given more development.   I don't  think the plot as it is needs to be any longer because that would just slow the pacing, but I do think the book could have benefited from beefing up in some select areas.