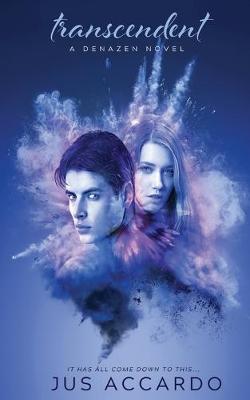 The boy she’d lost, and finally found again, is not the same boy she remembers. As one of the most powerful Sixes, Kale has changed in ways Dez can’t ignore.

They’ve been to hell and back, over and over, but this time they might not survive the fire.

When the truth at the root of the Denazen Corporation’s origins begins to unfold, those behind the scenes will do anything to keep it hidden.

Dez and Kale will be pushed to their breaking point. As long buried secrets come to light, they must fight for their freedom—and each other—as they never have before.

Kale’s destructive power could win the battle, if he doesn’t lose himself to it in the process. Or Dez will be faced with an impossible task—saving the world from the boy she loves.

ARC provided by NetGalley and Entangled Publishing. All opinions are mine and freely given.

"The boy she’d lost, and finally found again, is not the same boy she remembers.

As one of the most powerful Sixes, Kale has changed in ways Dez can’t ignore.

They’ve been to hell and back, over and over, but this time they might not survive the fire."


03-04: 'Transcendent' is the fourth book in the Denazen Novels by Jus Accardo. I have not ready any of the previous parts of the story, but suffice it to say.. though I didn't 'love' this book.. it was still highly enjoyable and I absolutely liked Kale enough to go back and buy the first three. The history in his wake has been a rough one and somehow he's still come through it with a tenderness and loyalty that others easily throw away.

Essentially, Denazen is a corporation run by a greedy, diabolical individual who has systematically hunted down people with special abilities, called 'Sixes.' He's not above torture, manipulation, exploitation, extortion, or anything else to get what he wants from them.

Some of the Sixes we meet in this book have already been through just about everything he has to throw at them in previous novels, but you know how evil geniuses are.. always working on one more thing to use as leverage. This one is no exception.. and he really is awful.

I did feel like I needed a bit of a scorecard to keep up with character family ties. Everyone is either related to everyone else, is and/or was involved with everyone else, or at some point one and/or both of those things changes at least once. While I'm sure it's meant to keep things interesting, I felt like it had the reverse effect. After enough incidents of it, I just blew off whatever changes occurred and didn't care.

Likewise, while I said I loved Kale, with the exception of a supporting character named Aubrey.. no one else really moved me. The main character swings back and forth between being kind of petulant and thinking she's a bad ass and the cast of characters treat her like she's the latter, but she's much closer to the former.

There's plenty of drama, emotionally and otherwise.. I just never felt connected to any of the characters and easily there should have been a couple of scenes that would have made me tear up, but they didn't.

It was definitely a page-turner though and the author handled fight scenes well, describing just enough to give the reader a visual, without drowning them in a transcribed attempt at showing them the entire thing start to finish. I'll also say, some of the abilities designed in this story are surprisingly creative, not always 100% good for the wielder, and in one case.. as it develops.. pretty damned cool to 'see.'

If you're looking for a read with some substance, but one you won't find yourself overly invested in, this may be your title. As I said before, I'll definitely try to go back and read the first three books eventually, if only to see the rest of Kale's story, but if I get to busy and it doesn't happen.. I won't be crushed either.

03-01: Though I haven't read anything from this series before, the cover and the synopsis reeled me in. So much potential.. if it's good, I'll end up going back to read the rest.. lol.
I have complicated feelings about this book. Initial thoughts after finishing it:

-The plot is a little convoluted (even Dez says it! But no, that doesn't make it okay)
-After all the build up of the relationship between Dez and Kale, I feel like this book doesn't really do it justice. I feel like their relationship takes a step back here, which is weird for a last book in a series where this is such an important part.
- The plot twists were pretty great!