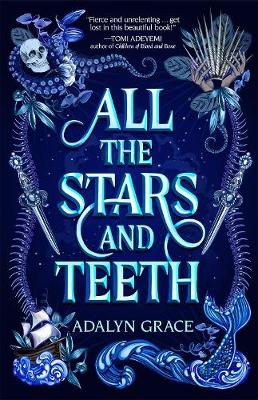 Named as one of Entertainment Weekly's most anticipated books of 2020, Adalyn Grace's All the Stars and Teeth is a thrilling fantasy for fans of Stephanie Garber's Caraval and Sarah J. Maas's Throne of Glass series.

As princess of the island kingdom Visidia, Amora Montara has spent her entire life training to be High Animancer-the master of souls. The rest of the realm can choose their magic, but for Amora, it's never been a choice. To secure her place as heir to the throne, she must prove her mastery of the monarchy's dangerous soul magic.

When her demonstration goes awry, Amora is forced to flee. She strikes a deal with Bastian, a mysterious pirate: he'll help her prove she's fit to rule, if she'll help him reclaim his stolen magic.

But sailing the kingdom holds more wonder-and more peril-than Amora anticipated. A destructive new magic is on the rise, and if Amora is to conquer it, she'll need to face legendary monsters, cross paths with vengeful mermaids, and deal with a stow-away she never expected... or risk the fate of Visidia and lose the crown forever.

I have put off reading this for a year, because... honestly I have no good reason. I just was afraid of being disappointed, as high seas fantasy & adventure novels filled with mythical sea creatures, mysteries and magics happen to be some of my all time favorite types of novels so...

Anyway, I was NOT disappointed! It did feel a bit too short, but I DID wait that year to read and it just so happens the second book was released this week... so no waiting for me!
Ok, so if you look below ↓ you will see how excited I was in October about this book. Sigh, it was nothing like what I was hoping for. Absolutely nothing. The writing wasn’t bad, I just felt like I’ve read this story before, just told in a different setting. I have said it in the past that I don’t mind formulaic stories but that is only if the story has ensnared my interest. Unfortunately, this story did not. There was not a twist or reveal that was exciting or surprising in the least. I was just bored and if I hadn’t been reading this book to complete a GR reading challenge I would have probably stopped reading it.

Why do I want to read this??

THIS, this is why:

Why yes, yes I will picture that and now I am utterly excited!!
I enjoyed this book more than I thought I would. The sense of adventure you feel while reading it is amazing and that’s really what the book focuses on- the adventure in the story.

The only reason I’m not giving this book 5 stars is just because I didn’t feel as deep of a connection to characters as I do in other books. Did I like them and feel for them? Yes, but not as strongly as I had hoped considering I was so wrapped up in the actual story. Like I said, it seems like this book focused heavily on world and story building and less on character development, though the character development was not bad by any means.

The ending felt strange, like it was not completely finished but also not left in a way that makes you think there will be a second book. I wanted more closure or a definite ending that leads into another book- not this wonder I feel left with now. I feel like it can’t be over because I feel so underwhelmed compared to how I felt the whole rest of the book. I see that there will be a second book but this still felt weird to me, like it could go either way because it didn’t wrap up nicely or leave on a big problem or question.

But all in all I did really enjoy it and I’m excited to read more from this author in the future!
I liked this book, but there were parts that I just couldn't seem to keep my interest. Now that may have just been me not being mentally into reading the book. Sometimes the main character annoyed me because she sounded angry all the time. I realize that if I was in her position that many of the things she saw or had gone through would make any one angry, but she just seemed angry all the time. I also, feel like the author had a tendency to repeat herself every few paragraphs, sometimes using different words to have the character think the same thing over and over. There were a couple times at the beginning of the book where I rolled my eyes, Okay, we get it. She doesn't like what her dad has done as ruler and that her people deserve better. Amora seemed the most fleshed out as it was all in her POV. I don't think we learned very much about the other main characters though. I hope we get more about the characters backgrounds in the next book. Over all I liked this book and I can't wait for the next one to come out. I'm very interested as to where she takes things in the next book.
I received a E-Arc of this book from Edelweiss and the publisher. This did not change my opinion.

Well from the beginning I knew this book was going to be amazing. I love pirates, mermaids, ships, and magic! I mean what an amazing mix. I did think that this book was going to be a dark story but man was I wrong! I mean it has some dark parts but it is nicely balanced. A lot has happened in this book. Cruses, bone magic, mermaids. (did I say mermaids!)
I would highly recommend if you enjoy things like that.

Now come on book 2!!
Read more of my reviews at Cornerfolds.com!

Review to come!
Review to come 2/20/20 on stillmorewords.com
Who up for a good mermaid tale? How about one that has an interesting magic system, a political war that been kept under wraps, a strong female character who comes out fighting for those she loves oh and let's add in a dashing pirate to swoon over. If that all sounds interesting to you then All the Stars and the Teeth is just your cup of tea. I admit that title is a little off putting for me but the cover it paired with is intriguing and eye catching. The books starts out with us meeting our strong female character Amora Montana who has trained her whole life to be the High Animancer (master of soul magic). We enter the story just as she reading to make a huge demonstration of just how in control she is of this soul magic. Things take off from their when it all goes horribly wrong and she discovers that what she thinks she knows about her world is far from the truth. The pacing of this story is nail biting and their are some epic sea monster battles, a mermaid with strong magic, and a final bloody battle that will leave you reeling. Keep in mind this is the first book in this epic series and their more to be discovered.
I received a copy of All the Stars and Teeth through NetGalley in exchange for a fair and honest review.

All the Stars and Teeth is the first novel in a series of the same name by Adalyn Grace. This is a fantasy series that blends magic and waters, royalty and legend.
Amora was born, bred, and raised to rule the kingdom of Visidia. Even if that meant she would never be able to travel the seas like she so desperately craved, she knew this was the job she was made for.
But on the day of her coronation, something goes amiss. Her magic is not as under control as she believed, and it just cost her everything. Or did it? On the run, Amora learns there’s a lot happening in her kingdom that she never knew about. Facts that will change – or ruin – the kingdom as she knows it.

“The world doesn’t work with only your eyes, Princess. There’s truth in more than what you can see.”

Warnings: All the Stars and Teeth touches upon some intense subjects, including (but not limited to) slavery, ownership, drug abuse, physical abuse, and forced magical bonds.

Wow. All the Stars and Teeth was such a whirlwind of a read! One moment I’m picking this book up, the next I’m finished. It took my brain a moment or two to realize that a few hours had passed in between. That’s how immersive this novel was.
I’ll confess that I actually did have a tiny bit of trouble getting into this book at first – just the first chapter or two. Amora’s confidence in her throne was mildly off-putting to me, for whatever reason. But once I was able to get a glimpse of the depth of this novel? I was sold.
This was a brilliant read, one full of a complex magical system (accompanied by fascinating lore), mythical creatures, love, loyalty, and so much more. It seemed like everywhere I looked there was something fascinating going on, and I just couldn’t get enough of it.
Amora’s character was an interesting one, and I adored watching her grow as a person as the story progressed. This was a girl who thought she was destined for one thing only. But then in the blink of an eye, that whole path was swept away from her. That can change a person, but it was extremely satisfying to watch the changes she chose to make for herself. It was empowering, in a way.
I really did love the magical system here, all the more so because of the way it evolved and changed over the course of this one novel. It makes me curious to see how much it’ll alter in the following books of this series. I honestly can’t wait to find out.
The romantic subplot was sweet, and a nice touch. It softened Amora’s edges, while giving her somebody to care for and fight for. There were times where I felt like this element mattered more than one might expect.
I really enjoyed All the Stars and Teeth, and absolutely hate that I have to wait another year (or more?) for the next novel in the series. But at least it’ll be worth the wait. Until then.

All the Stars and Teeth (2 books)