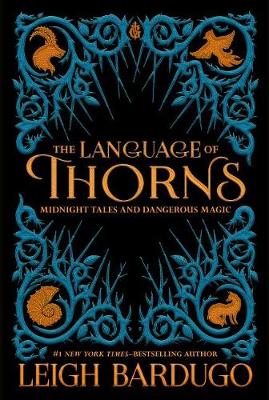 Inspired by myth, fairy tale and folklore, THE LANGUAGE OF THORNS will transport you to both lands familiar and strange that millions have visited through the novels of the Grishaverse.

Travel to a world of dark bargains struck by moonlight, of haunted towns and hungry woods, of talking beasts and gingerbread golems, where a young mermaid's voice can summon deadly storms and where a river might do a lovestruck boy's bidding but only for a terrible price.

Perfect for new readers and dedicated fans of the Grishverse.

This collection of six stories includes three brand-new tales, all of them beautifully illustrated with art by Sara Kiplin that changes with each turn of the page, culminating in six stunning full-spread illustrations as rich in detail as the stories themselves.

I don't think this book had any chance of getting a five-star rating from me. I have never been one for short stories. I am not the biggest fan of the Grishaverse. I do like dark stuff, but for me it often felt as if the dark stuff in these stories was just there to shock the reader, instead of serving any purpose.

I liked some stories more than others. They all had a message and were interesting retellings of classic fairytales, but it wasn't anything special.

Super tired, but just have to say... the Fjerdan little mermaid retelling was the absolute best LM retelling I’ve ever read. It makes me want to sing and dance and celebrate haha. Even though it was an only a short story- it was INCREDIBLEEEE.

RTC on rest of stories coming- pretty much told in my updates but still!
Every single short story in this collection captured my imagination and delighted me. I love everything Leigh Bardugo!


I’m a completionist, I know I should just go ahead and read the first book in the Six of Crows duology, but this was a collection of short stories that I wanted out of the way first. Surprisingly, I found some of these short stories to be a better read than some full length books in her trilogy.

This was supposed to be out much earlier but I was drawn a little too much into Invictus to focus on anything but, thankfully I should be done with that one tonight or tomorrow morning. For this short collection, I really loved how dark it got at times. I mean, I didn’t expect much going in, but some of these stories were really interesting to read for me and because they’re really separate entities; I’m going to talk briefly about each of them below to give it a more thorough approach:

Ayama and the Thorn Wood

I’m not going to lie, for this one I expected a very typical turn of events based on more cheesier YAs, but I was pleasantly surprised to see that although the ending was somewhat predictable. The road to it was so beautifully decorated with the darkness of human greed and creative thinking that I found myself wanting to flip to the next page as soon as possible. The world Bardugo painted in this one made me wish we got to see more aspects of her Grisha verse than the ones we focused on, I mean it’s nice to see that she put these stories in different locations, but when you don’t know what makes the locations that distinct, it kind fells like a waste to me.

For this one, I really enjoyed how different the protagonists were to the first story and her trilogy in general. The main thing I enjoyed seeing here was how our Fox got out of trouble, while I would’ve thought that it might a goner, I’m amused to see that most of his schemes actually worked. The ending of this story probably surprised me the most, I usually notice when twists like that appear but for some reason this time, I didn’t and that in turn made it quite a ride.

The Witch of Duva

I feel like this story was toned down a bit in brutality, I mean it could’ve easily gone there but the way Leigh Bardugo opted to have a more subtle approach gave it a more sinister vibe. Now tbh, I didn’t enjoy this story until about half way through it because it started like a typical step-mother situation and I wasn’t in the mood but around the half way point, things started to change and it was an interesting thing to see how she took this spin on Hansel and Gretel.

This story was the first story I didn’t enjoy in its entirety all that much. Very predictable in almost all of its events and although I liked the outcome or rather how different Leigh Bardugo made her female character think, I would say it’s one of the weaker entries in it. Again, the ending does make it end in a pretty good way, so that is a little solace in the end.

If I’m talking about weak entries, then this one will surely take the cake. The form of narrative this followed made it seem like a load of nonsense to me, other than that I found myself not caring at all about the characters in this story, regardless of their relevance while waiting for it to just end so I can move on to the next one. If I had to attach it to something, then it really reminded me of Kathrine Arden’s The Bear and the Nightingale which is a book I dropped or DNF’d about 25% through it. Probably would’ve dropped this one too if I didn’t need to finish it to move on to the final story.

This one on the other hand was a pretty cool story to read, I didn’t expect a twist on the Little Mermaid, but I’m definitely not complaining. I do admit that the beginning of the story wasn’t very promising since it implied a very naive and cheesy outcome to follow in the end, but I was pleasantly surprised to have my earlier assumptions shattered to reveal a darker take on the story instead. This honestly made me think that this would’ve probably worked as Ursula’s backstory or something and I honestly want a sequel to see more.

One more thing I really enjoyed about this collection were the illustrations, I love art like that and this didn’t disappoint at all.

"You know how the stories go. Interesting things only happen to pretty girls; you will be home by sunset." (Ma Zil to Ayama, Ayama and the Thorn Wood)

What an awesome anthology of short stories from the Grishaverse! The stories in The Language of Thorns are dark, feminist and delicious.

The short stories from The Language of Thorns have some similarities to fairytales such as Beauty and the Beast, Cinderella, The Ugly Duckling, The Nutcracker and Little Mermaid, but they are much more darker, honest, brutal, cruel, realistic and human. I was looking forward to the twists, turns and trope subversions and couldn't turn the pages fast enough to see how Bardugo was going to spin a well known tale and make it her own.

My favourite stories in The Language of Thorns are Ayama and the Thorn Wood, The Witch of Duva and When Water Sang Fire (a origin story for Ursula from The Little Mermaid that I adored). However, there are a few stories that miss the mark.

I can't wait to read more of Leigh Bardugo's short stories. She certainly has a knack for telling them.

"We were not made to please princes." (When Water Sang Fire)

Initial thoughts: The illustrations really make this book! They added so much impact and intrigue, beautifully accentuating the stories. Much love for them!

Now, for the stories, I didn't expect to enjoy The Too-Clever Fox, The Witch of Duva, Little Knife all that much. They were written during the time of the original Grisha trilogy, which I wasn't a fan of either. I did, however, love the Six of Crows duology, so I had a lot of hope for the three new short stories that were part of this anthology. I was not disappointed.

I liked Ayama and the Thorn Wood and The Soldier Prince a lot. They were imaginative and the prose showed a marked improvement over the older short stories. Then there was When Water Sang Fire. I adored that story! It was (dare I say it?) even better than Marissa Meyer's take on this retelling, and that was one of my other favourite short stories that I read this year. Funny thing is, I never liked the character Ulla was based on. Yet here I am, singing praises for Leigh Bardugo's take.
I still love these stories so much. I think my favourite may be The Witch of Duva, but honestly I don't want to pick a favourite because they're all magical and amazing in their own ways!
Yesss, Little Knife.
Overall, I'd give this collection of Grisha fairytales a solid 4 stars. The only reason it missed a 5 is because it's difficult for short stories to evoke strong feelings of love in me. Unlike with most short-story collections, every single tale in this book I found to be engaging, beautiful, and unique. (I say unique for what they are - Grisha retellings. Obviously, the stories draw inspiration from Hans Christian Anderson, the Grimm Brothers, and other classic fairytales authors!) I did, though, enjoy some stories more than others, just based on personal preferences.