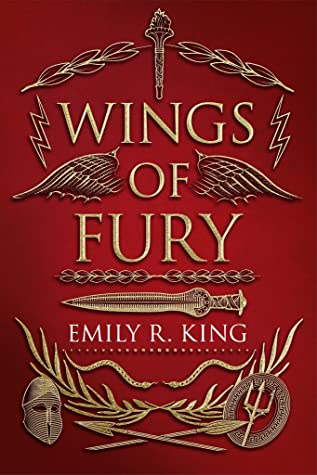 From Emily R. King, author of the Hundredth Queen series, comes an epic novel of ancient Greece, Titans and treachery, and the women who dare to rise up against the tyranny of the Golden Age.

My mother told me that men would speak about the Golden Age as a time of peace and happiness for all… However, the women of our age would tell a very different story…

Cronus, God of Gods, whose inheritance is the world. Among his possessions: women, imprisoned and fated to serve. The strong-minded Althea Lambros controls her own fate and lives to honor her dying mother’s plea to protect her two sisters at all costs. Althea’s journey toward crushing the tyranny has begun. It is a destiny foretold by the Fates. And she is following their visions.

On the southern isle of Crete, hidden among mortal women who have fled the Titans, is the Boy God, son of Cronus and believed dead. He shares Althea’s destiny to vanquish the Almighty—fate willing. Because Cronus has caught wind of the plot. He’s amassing his own forces against Althea’s righteous rebellion and all those who will no longer surrender or run. There will be war. If she’s to survive to write their history, the indomitable Althea must soar higher than any god.

I voluntarily reviewed an Advance Reader Copy from the Publisher. This does not affect my opinion of the book or the content of my review.Wings of Fury by Emily R. King is a beautiful tale that reenvisions the Greek Gods' beginning.

Will Althea stop Cronus with the Boy God's help?

Althea Lambros is our main character, and she is a very headstrong young woman. I liked her from the prologue to the very end. She loves her family and will do anything to protect them, even if that means doing something she would never do. Althea likes to do things that most young women back then wouldn't do. Many things that Althea does here make me like her more, and I think that I would enjoy her company if I were to meet her. There isn't much that I dislike about her. Under the circumstances, I get her choices.

Cronus has lived a long time and has been ruling since usurping his father to take over. Althea, Cleora, and Bronte Lambros lived a relatively normal life until their mother died. After that, their life has turned upside down. Now Althea is running against a clock to get the Boy God ready to defeat Cronus so that the world can be a good place again. Especially for women, more so than anything else. Althea is a good person that is trying to do everything she has set out to do. But has she quite possibly made too many promises? Just get the book to find that out.

Wings of Fury by Emily R. King is a fantastically written novel about the author's vision of what she thinks happened to the beginning of the Greek Gods and Goddess reign over the world. I have to say that Ms. King got me hooked from the very beginning. I loved how she wrote the book in the first person, as it made me root for Althea and want her to do anything that she set her mind to. Five stars and a big recommendation to me to read Wings of Fury by Emily R. King.

Thank you for dropping by! I hope you enjoyed this review of Wings of Fury by Emily R. King.

Until the next time,

As a big fan of the Hundredth Queen Series, I had to pick up and read Emily R. King's newest series Wings Of Fury. Especially since it's set in the Greek Golden Age era and explores the women place and treatments during this mystical period when while men enjoyed peace, progress and fortune, women were not more than breeding slaves owned by men. And I don't regret it, because I really loved it. I must admit that I got worried by the many similarities with the Hundredth Queen, but by the end of the book I was over it and completely hooked. The book is filled with twists and turns, and you won't see coming the ending. Can't wait to read book #2, The Crown Of Cinder, which should be out on October 2021.