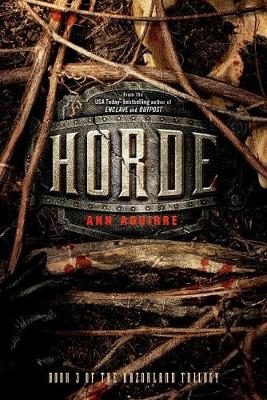 The horde is coming.

Salvation is surrounded, monsters at the gates, and this time, they're not going away. When Deuce, Fade, Stalker and Tegan set out, the odds are against them. But the odds have been stacked against Deuce from the moment she was born. She might not be a Huntress anymore, but she doesn't run. With her knives in hand and her companions at her side, she will not falter, whether fighting for her life or Fade's love.

Ahead, the battle of a lifetime awaits. Freaks are everywhere, attacking settlements, setting up scouts, perimeters, and patrols. There hasn't been a war like this in centuries, and humans have forgotten how to stand and fight. Unless Deuce can lead them.

This time, however, more than the fate of a single enclave or outpost hangs in the balance. This time, Deuce carries the banner for the survival of all humanity.

3.5 Stars.
http://www.divabooknerd.com/2014/01/horde-by-ann-aguirre-lazy-review.html
I loved Enclave, I enjoyed Outpost and was eagerly awaiting Horde. It wasn't a disappointment as such, but seemed to drag on and on. Readers who regularly visit Diva Booknerd, know how quickly I tend to read and review, but Horde took me five long days to get through, wanting to abandon the book several times through lack of interest. But I'm thankful I persisted, mainly due to a review by Dre over at Sporadic Reads, I forged on. The second half of Horde was awesome and the ending was sweet but not without it's share of heartbreak. Ending on a beautiful note was just enough to redeem the finale of the Razorland series, but just barely.
This book was an AMAZING conclusion to the end of this trilogy. I feel utterly sad that I have finished, I became attached to the characters and this world. This is definitely one of the best series out there.