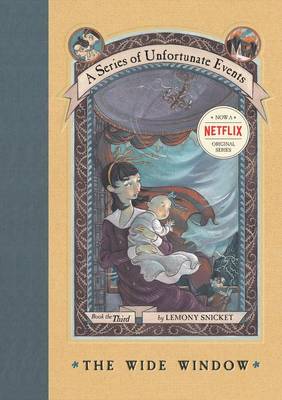 Having escaped Count Olaf's clutches for now, the three Baudelaire siblings, Violent, Klaus and Sunny, arrive on the shores of Lake Lachrymose to stay with their latest guardian, Aunt Josephine. Sadly, though kind and well-meaning, Aunt Josephine is terrified of absolutely everything: she will not heat her radiators, use the telephone or cook food, just in case those ordinary tasks prove fatal. Worse still, she gives Violet a doll called Pretty Penny and obsessively corrects the children's grammar. It is not long before local sailor Captain Sham, a thinly-disguised Count Olaf, gulls Aunt Josephine with the idea of a surprise for the children. Aunt Josephine suddenly goes missing that night, leaving a highly ungrammatical note, and the Baudelaire's must once again fight their way out of Count Olaf's wicked schemes. Finally, after sailing across the Lachrymose Lake in Hurricane Herman, a nasty moment in the Curdled Cave and an unpleasant encounter with the Lachrymose Leeches for Aunt Josephine, they unmask Captain Sham as Count Olaf. Olaf slips through their grasp once more but evilly promises to find them again, as he will in The Miserable Mill.

The third installment, The Wide Window, sees the Baudelaire siblings placed with a new distant relative - their Aunt Josephine - a second cousin's sister in law. Aunt Josephine is a grammar fiend and terrified of life. She won't touch the doorknobs in case they shatter, she doesn't cook hot meals because she could burn herself, she spends her time freezing because she's scared the radiator will explode, she won't pick up the phone for fear of being electrocuted, her lists are endless and lead you to wonder how she's managed to live so far. It sounds utterly depressing but then I guess that's the point.

And yet for all her fear, one meeting with "Captain Sham" sees her smitten and unwilling to listen to any such nonsense that Captain Sham is really Count Olaf. Honestly Josephine is easily the worst relative so far and that includes Count Olaf because at least he was honest (to the Badelaire's anyway) about his intentions - - they might not have known what he was going to do but they were sure he was up to something. Aunt Josephine though is a horrible person. She is ready to sell them out for the sake of herself. Why agree to take the children in at all? She abandons them at the first sight of trouble. It's not like she didn't know they were being pursued by Count Olaf. She said Mr Poe warned her.

So Count Olaf threatens her and she caves, fakes her death and wills the children to Captain Sham. The kids figure out that her note is really a code and track her down to a cave. Where they find she's planning to live in a cave and they can either live with her there or go live with Captain Sham. I mean really?! She could've just faked her death without leaving them in the care of Captain Sham. At least then she wouldn't have been such an utter bitch.

Like usual, the children have to save themselves, unable and unwilling to trust the adults in their lives. This time, Sunny saves the day - biting through Captain Sham's fake leg and revealing the dreaded eye tattoo of Count Olaf.

Like the first two books, the action is fast paced and riddled with the sad and depressing story that is the Baudelaire's life. The bit at the end about them at least having each other wasn't enough to cheer me up for all it was a nice sentiment. 3.5 stars.
Same review as The Bad Beginning applies. After starting the show on Netflix, we were enticed to start the series. My oldest (9) is reading the books either through the library or Libby and we are all listening to the audiobook on our adventures here and there. While I doubt I would enjoy the series for myself, sharing it with the children has been entertaining. We are about to now start The Miserable Mill after finishing up The Wide Window.

The Wide Window is so far my least favorite but man, some guest characters just drive me nuts.
Really cute and fun read, for a middle grade series. I'm still planning on reading my way through the rest of the series, working a book in here or there. Full review for this coming soon.
~*Full series overview here on The Bent Bookworm!*~

The Wide Window takes place far and away from the first two books, in a reclusive town and even more reclusive house with, you guessed it, yet another unstable distant relative as guardian for the Baudelaire children. This time their guardian, Aunt Josephine, isn’t even actually related to them, but is their “second cousin’s sister-in-law.” Who just happens to be terrified of everything. The dock. The lake. The oven. She never eats anything hot for fear of getting burned by either the oven or the food. However! She has an intense passion for grammar.

“Grammar is the greatest joy in life, don’t you find?”

Being something of a grammar freak myself, I found her constant corrections and horror at bad grammar to be quite entertaining and that in itself is the reason this book received a slightly higher rating (3.5/5 stars) than books 1 and 2. It really was hysterical at times, and plays an interesting part in the story.

Of course this wouldn’t be an A Series of Unfortunate Events book without, well, you know. Horrible bad luck. Of course these kids can’t catch a break and when a “Captain Sham” (hahaha ok, Lemony Snicket, you must have had such fun naming characters) shows up with an unhealthy interest in the children and all kinds of sweet words for Aunt Josephine, the terror begins. Once again (I since a recurring plot) the kids are forced to fend for themselves due to the incompetence of their adult guardians, and once again after a great deal of running around and close calls and horrible things happening to certain people, they manage to escape.

After their uncle's death the Baudelaires are moved to their Aunt Josephine's who lives on the top of a cliff looking down on the sea. She is scared of everything including the water below her home. Soon after being intrusted to Josephine's care she becomes infatuated with a pirate by the name of Captain Sham. Personally, I don't understand why anyone would be infatuated by a pirate that isn't in the form of Johnny Depp but each to their own. In the end, this admiration became a fatal attraction minus Glen Close.

Aunt Josephine is also obsessed with proper grammar and sometimes the book felt like a fucked up English lesson, although grammatical errors played an important part of the story later.

I really enjoyed this one, the premise was so looney (looneyer than the first two anyway). I also appreciate the proper grammar segments, such as when to use who and whom. Mr. Poe, the man who is in charge of the desired inheritance until Violet comes of age is starting to irk me. Are people really that blind? I think he's almost as bad as Olaf as he is partly responsible for putting the children into these nasty situations. But then again if everything was hunky dory we would have a story would we?
This was a pretty good one.

I really liked Aunt Josephine and her interest in the English language. The story focused on the three Baudelaire children, of course, but it had a lot of things to say about grammar as well, which isn't the most interesting subject, but this book incorporated it into the story in such a cleer way that it was actually interesting, what with its hidden messages etc. I really liked that, and I picked up a few things myself.

I find it kind of odd, that Violet is now two years older, but Sunny is still speaking in baby language. Shouldn't he have learned it by now? :P

I do hope that we won't meet Count Olaf in disguise in the next book, since it's getting rather repetitive.
Another dreary town and another silly, unperceptive guardian. Overall, this is not my favorite of the "Series of Unfortunate Events," but there are definitely some fun lines in it. It's always important to remember that this is a series written for children so the characters will be flat and silly, the plot will be simple. I like Snicket's writing style and his wit and I still think this series is a fun weekend read, despite the fact I am 10+ years above his target audience; I still find it enjoyable.
The Wide Window is one of the spookier ones (at least for someone afraid of heights). Grammar is a big part of the story, which I thought was hilarious. I never met anyone obsessed with grammar to be honest. Count Olaf is on this worst in The Wide Window, in a cold-blooded murder kind of way.
I’ve already expressed my dissatisfaction with Lemony Snicket as audio book narrator, but the book itself was fine. They’re getting a little formulaic, but you have to learn to lower your expectations when you’re reading books meant for children. And even I learned something from the little grammar, vocabulary, and history tidbits woven into the story.