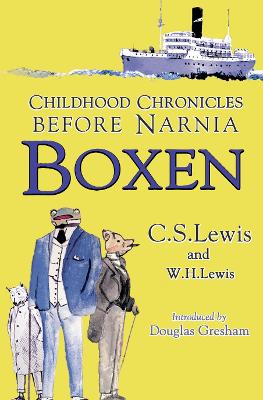 The lost tales of `Animal-land’, written and illustrated by C.S. Lewis and his brother Warnie, which they developed into the chronicles of the kingdom of Boxen, newly published to mark the centenary of the first story.

Half a century before the publication of The Chronicles of Narnia, C.S. Lewis created another imaginary world. The tales of `Animal-land’ which eight-year-old Jack (as his family knew him) had shared with his brother Warnie developed into the chronicles of the kingdom of Boxen. In a succession of stories over the next few years, the young Lewis explored its history, geography and the colourful exploits of its inhabitants in vivid detail, writing the last of the papers, his Encyclopedia Boxoniana, in April 1928.

This landmark edition marks the centenary of the very first Boxen manuscript. Here are all the stories, some never before seen, sensitively edited and arranged to make the most of the fabulous and inventive fantasy while retaining all the vigour of a child’s imaginative writing. Lavishly and charmingly illustrated by the author, and published for the very first time in colour, together with facsimile pages from the original notebooks, this book will provide a unique insight into one of the most extraordinary minds of our age. For every reader who has been captivated by the magic of Narnia, Boxen will open a window on to another enchanted land.