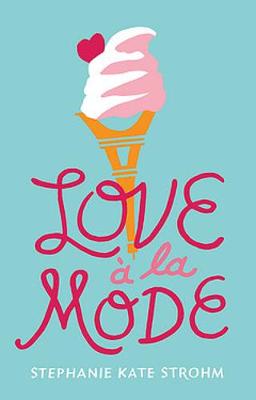 One of my favorite things to do after a long day at work is to unwind with a cooking show. Can I cook or bake? Barely, if you count boiling pasta or making a salad. Yet anything food related on tv- Master Chef, Chopped, Holiday Baking Championship, Chef's Table, etc.- and I am here for it. Cooking shows are the number one thing taking up room on my DVR, so when I found out about Love á la Mode I was PUMPED. A YA series set in Paris with the backdrop of an intensive cooking school? 100% right up my alley. I was so excited for this title that I even added it to my Christmas list (and received it- hey thanks Mom!) which I usually only do for books I'm SURE I'm going to love and/or I've already read and are favorites.

Unfortunately, Love á la Mode did not prove to be the book I hoped it would be. While it had so many of the elements I loved, there was just not enough cooking. Set in a super exclusive cooking program in Paris, I was SO READY for the culinary lessons and cutthroat competition. However, there was much less time spent in the kitchen and much more time focused on the miscommunication teenage relationship drama.

The story is told in alternating POVs between Henry (who's always dreamed of opening a restaurant after growing up in his parent's family owned establishment) and Rosie (the midwestern girl from "America's Heartland" who just wants to be a pastry chef and examine crumb structures). While they have a bit of a "meet cute" on the airplane headed to France, I didn't really feel much chemistry between them, and honestly feel like I didn't really get to know them at all. I wanted to learn more about Rosie's family dynamic with all of her brothers, about Henry's family restaurant and his upbringing with a chef father- but sadly only a few bits and pieces are really revealed and instead we get to know the characters through their inevitable ~relationship drama~ and I was just not really feeling it. I felt like it was actually not a super healthy courtship and Henry treated Rosie like dirt a lot of the time (and even though as I reader I got Henry's perspective, I still didn't think the expectations and standards he imposed on her were fair and OK). In fact, there's a bit of a love triangle and I was whole-heartedly voting for the other guy who was honestly a much nicer, more personable, more MATURE person than Henry.

There were also a few problematic stereotypes in the story. There's a stereotypical beautiful, popular mean girl who never gets humanized and her character is never really fleshed out (and she's not necessary to the plot at all so really the narrative could have excluded perpetuating this harmful girl-on-girl hate). Henry's mother is also super one dimensional and is only focused on his grades and is an overbearing presence in his life, which I think is harmful because it's never really resolved in a real way (rather a band-aid is put on the situation) and given Henry's Asian heritage perpetuates a stereotype of an overbearing mother that was uncomfortable.

While I took issue with many of the elements of the plot, I did enjoy reading about the food elements when they appeared. I loved the first culinary class they have when they have to create a perfect "french omelette" (which I hear is usually the first thing you learn in culinary school) and it was fascinating to read each character's interpretation of what that meant. While there were far too few scenes in the culinary classroom for my taste, there were some wonderful food scenes when the characters went out and about around Paris, including a positively magical crepe experience and a boulangerie run by an adorable gentle giant chef with every type of bread and pastry imaginable (I almost felt myself gaining weight reading about all of the bread, croissants, tarts, etc. that the characters devoured from this single shop). There was also a great friend group that had characters that were really supportive of each other, and I adored Hampus (seriously best character of the book, how many teenage dudes would rock a Marié from Aristocats Halloween outfit)?

Overall: While Love á la Mode was a fun and quick read, it left me wanting more from the kitchen and fell into many tropes and stereotypes that didn't sit well with me.This review was originally posted on Girl in the Pages
Review coming TOMORROW, Friday December 14 at http://kaitgoodwin.com/books!!!
Rating: 4.5 Stars

Paris is a city associated with lights, love, and culinary delights. Henry and Rosie were both making their way there to join an elite high school culinary program, which was an important stepping stone for them both. For Rosie, it was a way for her to discover the world outside of her small town. For Henry, it was a way for him to prove to his mother, that he had the talent and the ability to succeed in the culinary world. But, would there also be room them to find love?

As always, Strohm provided me with an adorable story. The banter was on point, and I laughed quite often, but this was also a little different from her previous three books. Those leaned heavily on the comedy part of rom-com, and this book, while quite funny, featured more tender and heartfelt moments.

Many of those moments starred Rosie. She really tugged at my heartstrings. Her backstory and the interactions with her family were all quite touching. The texts from her brothers always made me laugh, and her mother's endless support and love never failed to deliver some feels.

This book incorporated many elements I love, and together resulted in a great reading experience.

• The setting - I love Paris, and Strohm did a great job taking us into the city. Not only did she bring us to some popular places, but she gave us a pretty immersive eating experience too.

• Boarding school - I have an affinity for stories set in boarding schools, and we get that dynamic combined with the fervor of a reality cooking show and high school antics.

• The food! - This was a culinary school, and there was a LOT of cooking, baking, and eating going on. Strohm must be a foodie, because the descriptions were quite vivid and mouth-watering.

• The characters - What a fun group of characters! Each one had their own little quirk, and combined to form one fantastic friend group.

• The friendships were strong in this one. They may have been competing against one another, but they were still always there to lend a hand or a shoulder to cry on. They supported and encouraged each other, and there were a lot of awww-worthy moments shared.

• The romance was adorable. Yes, there was some miscommunication, or rather, a lack thereof, and also some misinterpreted signals, but there were also a bunch of tender and sweet moments, and I thought Henry and Rosie were precious together.

Overall: This book was a tasty treat stuffed with an adorable romance, fantastic friendships, lots of heartwarming moments, and tons of food!