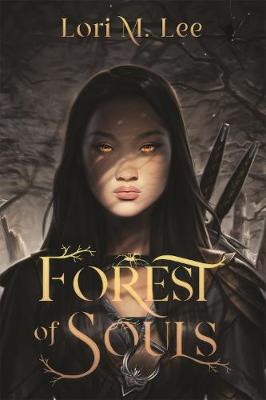 Sirscha Ashwyn comes from nothing, but she's intent on becoming something. After years of training to become the queen's next royal spy, her plans are derailed when shamans attack and kill her best friend Saengo.

And then Sirscha, somehow, restores Saengo to life.

Unveiled as the first lightwender in living memory, Sirscha is summoned to the domain of the Spider King. For centuries, he has used his influence over the Dead Wood - an ancient forest possessed by souls - to enforce peace between the kingdoms. Now, with the trees growing wild and untamed, only a lightwender can restrain them. As war looms, Sirscha must master her newly awakened abilities before the trees shatter the brittle peace, or worse, claim Saengo, the friend she would die for.

OMFG I NEED THE SEQUEL, BROKEN WEB, RIGHT THE F NOW! This was absolutely incredible. Honestly I just absolutely loved it! The World Building, the Character Development, the PLOTTTTT just omfg. (i don't know why I capitalized the first letters in those, even though they are not proper nouns. Just ignore that; I'm all mixed up because this book was Freaking Phenomenal. Hahah
Forest of Souls was a book that once I started reading, I could not put down. I just needed to know what was going to happen.

I loved the plot and thought of this as a fast paced adventure. I read the book in a day because I needed to know what was going to happen. I actually think I read Lori’s other books in a day as well. I just think her writing style really appeals to me. There is definitely an elimination of mystery to the story as well as a plot that branches in a couple directions. Although some questions are answered in this first book there are still more that need to be sorted. The ending of the book left you hanging but also felt like a comfortable cliffhanger. If there can be such a thing.

There isn’t really romance in Forest of Souls but there is potential for romance. Which I liked even better. Say if in the next book some things developed it would be so natural because of the ground work in this book. At the same time if nothing develops, I wouldn’t be upset either because that would also seem natural.

I loved the friendship and familial bond between Sirscha and Saengo. No matter what they have one another's backs and even though there are things they have to work through. They are able to put those things on the back burner in order to conquer more pressing problems. I think because it feels like they know they have to hatch some stuff out but they also know they can make it through it because their bond is strong.

There are other side characters that I really liked. Meilek, Theyen and Phaut, were all characters that added their own special touches. I felt like Kendara and Ronin are a little more enigmatic and I hope there is more revealed in the next book.

Like I said I don’t want to spoil the plot because there are things that are mysterious and revealed throughout the story. I did really enjoy Forest of Souls and I’m really excited for the next book and to see what road all the characters end up following.