Priest of Bones (War for the Rose Throne, #1) 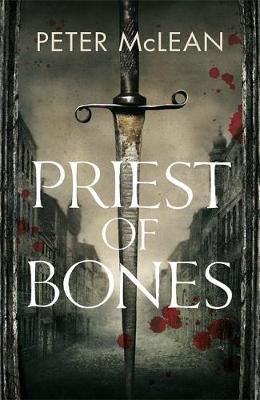 Priest of Bones (War for the Rose Throne, #1)

'Sixty-five thousand battle-shocked, trained killers came home to no jobs, no food and the plague. What did Her Majesty think was going to happen?'

Tomas Piety takes his duties seriously: as a soldier, as a priest of Our Lady of Eternal Sorrows and as a leader of men. He has come home from the war to reclaim his family business, to provide for his men and to ensure the horrors of Abingon can never happen in Ellinburg.

But things have changed: his crime empire has been stolen and the people of Ellinburg - his people - have run out of food and hope and places to hide. With his best friend Bloody Anne, his war-damaged brother Jochan and his new gang, the Pious Men, Tomas sets out to reclaim what was his.

And as Tomas is dragged into a web of political intrigue by the sinister Queen's Men, forced to work against the foreign infiltrators lurking in the backstreet taverns, brothels and gambling dens of the Stink, one thing becomes clear.

'Fans of Daniel Polansky, Mark Lawrence or, dare I say, Blackwing will most appreciate this book' - Ed McDonald, author of Blackwing

It took me a good long time to read this book. I started reading it and I would stop, then I’d try to start it again. Then I decided to just buckle down and read the book. I have to say it was a pretty darn good book.

I wasn’t expecting it to be the first in a series, but as I started coming closer and closer to the end, I realized that it may well be part of a series – and I was right, it is. The book takes you on a journey of what happens in a medieval style world when someone comes home from war and realizes that a new war is brewing and it’s starting in his own city. The book is rather slow to start and at times doesn’t make sense, but anything that doesn’t make sense at the time will be clarified later in the book.

This particular novel is written memoir style – the narrator refers to his having written things which is an interesting concept. Usually you don’t see novels written as memoirs with the narrator stating that he or she had written something earlier. I fully expect that if this series were to become movies, that you’d find an old, wizened man at the end closing a notebook in which he’d written the entire sordid tale.

The book was well written and I have to admit, although it isn’t normally my type of book, I was into it. The characters were developed as much as they needed to be and the ones that aren’t, well, there’s a reason for it. Some of them don’t need it, some of them don’t need it right now. Read the book and you’ll see.
Grim but well done This is quite grim. There's a high body count and a lot of messy wading through blood stuff going on here. They conscripted Tomas Piety and while he served in the Army he became a priest, almost by default. Now he's back to his home town to find it changed and to find that there are things he will have to do to save his business, his town and possibly his country. His life will never be the same again and politics will take him from his ordinary life.It's interesting, grim but you can see the reasoning for the grim, there is some of the violence that is a little over the top but he's a mob boss trying to reclaim his territory, this is all pretty much par for the course. Many of his underlings are well drawn and I cared for some of them. You can see Tomas' motivations and while some of them weren't things I cared about I could see where he was coming from. He cares about his people and will do anything for them but his definintion of his people is mutable.It's interesting and well done and I'm looking forward to more in the series.
Priest of Bones is the first book in a new dark fantasy series, that is heavy on the socio-political and the thriller and light on the fantasy. This is very much a crime family story and so far outside of my normal comfort zone, but I love intrigue and cunning characters so I took the chance.

Priest of Bones focuses on Tomas Piety a conscripted army priest as he returns back home and works to reclaim the city he used to run from the shadows. He also returns home with a company of soldiers who are quickly pulled into the family as he works to rebuild his small empire. While I enjoyed the story overall, there were a few things that kept me at arm’s length at all times. The world building is both fantastic and disappointing at the same time. I feel like I could sketch out a map of Ellinburg from memory, the city is vibrant in its griminess. However, the world as a whole feels like a mystery. I see the after effects of the war that was raging prior to the start of the book, we are given small glimpses of the horrors of Abingon…but I don’t understand it. There is a mysterious and powerful queen, but not much is mentioned about her or her reign other than in the context of spies and war. The fantasy element, other than the setting, is very slight but incredibly compelling as it is such a rare topic in the book. The style, however, was really engrossing and made it super easy to dive into, and before I knew it the ages were flying by.

That same issues also plagued the characters as well. We get to see and understand Tomas Piety, and there is a lot of insight on his brother as well. Both are really interesting, but not particularly likable. I loved Tomas’ dual nature of both being a crime boss with a very dark side but also a priest who listens to the confessions of those around him. It’s such a cool idea, and I think it’s really neat hook. I also liked Bloody Anne, Tomas’ right hand, who is a fierce woman with some surprising depth. But as I said, it had the same issue of feeling somewhat distant at times and I just didn’t find myself too engaged with the characters. There is also the matter of the nicknames which drove me crazy. It’s the one thing in the whole ‘crime family’ trope that just drives me batty, it’s so cheesy and I do get that it was a thing that some crime families actually did…but again…cheesy. We get such gems as Will the Woman, Black Billy, Billy the Boy, and Bloody Anne. For the most part, people are referred to as just the name, but then randomly someone will actually hold a conversation and refer to that person, to their face, by their moniker and it just felt so stiff and awkward. I also felt that other than Anne, Tomas, and Jocian we don’t get to know any of the other characters enough to truly have them feel fleshed out. It is, however, a really interesting group of people with a ton of rough and tumble personalities and more than a few mysteries surrounding them.

Overall I enjoyed Priest of Bones, and despite some issues connecting with the story, I found it be a fun read. I’m definitely curious to see what the sequel will throw our way.

I received a complimentary copy for review purposes, all opinions are my own.

"Ellinburg is corrupt to the core," she said. "From Governor Hauer on down, the city all but stands on the shoulders of its underworld."

Priest of Bones is the first installment of the new grimdark fantasy series War for the Rose Throne. If you are like me and love morally grey characters and anti-heroes, then you will love Priest of Bones!

Tomas Piety is an army priest who prior to being conscripted to fight in the war was the boss of the Pious Men, a gang that ruled the streets of Ellinburg known as the Stink. When he and what's left of his men return home, he finds that he's been dethroned by some opportunistic outsiders as the Prince of the Stink.

In true grimdark fashion, the world of Ellinburg is bleak. There's disease, people are hungry, and work is hard to come by. While Tomas "cared" for those in his streets that pay taxes for protection, in turn providing them with work and food if needed, the people who stole his crime empire while he was at war did nothing for the people of the Stink. The war may have ended, but the world is a violent place.

Priest of Bones is told in Tomas' first person perspective as he is writing down the story, writing directly to the reader. Tomas has a characteristic wit and an ego to boot, and I found the narrative full of his boasting about how he knows to lead men and how smart he is which I found a little tiresome at times, but at least his strategic mind backed up his ego. With his Pious Men, he fights to reclaim his businesses and right the wrongs of the streets. His protection may not come for free, but he takes care of his people.

There is a large cast of characters and thankfully there is a Dramatis Personae at the beginning of the book that lists all of the characters - I referred to it quite often because I found that most characters were a bit two-dimensional and difficult to keep track of. The main characters of Tomas, Anne, Billy the Boy, and Jochan were a bit more fleshed out but I look forward to seeing some character growth in the continuation of the series as I think some interesting arcs have been set up for them.

I do wish that more time had been spent to worldbuilding in this book; however, there is a good amount of explanation about the religious systems and a taste of the political intrigue that begins to play a role in this book and will be front and center in the next one. I would have liked to learn more about the overall world itself, its history, the magic system/cunning (I honestly have no idea, but I think that is the point as the characters don't either), and a bit more about the Queens Men. That being said, I really enjoy worldbuilding a lot and for a lot of readers what is provided will be enough!

This is a gritty, dark, and violent book. I have an extensive list of content warnings at the end of the review, but I do want to say that all of it is addressed in the text through Tomas' character. He is about as morally grey as you can get... an anti-hero with strict rules. It took me awhile to settle into the narrative, but even then I was drawn in immediately with the wit and humor of the narrator. Overall I enjoyed this plot-driven book and will definitely continue with the series!

Many thanks to the publisher for providing me an electronic advanced reader copy of this book via NetGalley in exchange for my honest review. Quotations taken from an uncorrected proof and may change upon final publication. Priest of Bones will be released on October 2, 2018.