V is for Vengeance (Kinsey Millhone, #22) 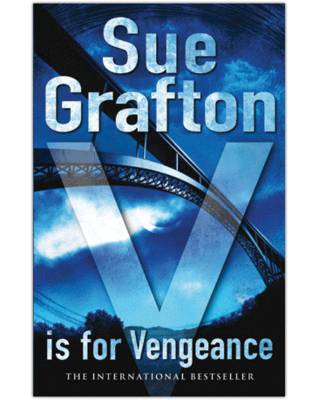 V is for Vengeance (Kinsey Millhone, #22)

Las Vegas, 1986. A young college graduate is murdered when he is unable to pay back a loan funded by notorious criminal Lorenzo Dante.

Two years later private investigator Kinsey Millhone finds herself assisting to apprehend a shoplifter - Audrey Vance - in a shopping centre. Events take a much darker turn when Audrey's body is discovered beneath the Cold Spring Bridge, a local suicide spot.

Unable to believe she took her own life, Audrey's fiancé Marvin Striker hires Kinsey to investigate. It soon emerges that the shoplifter had become caught up in a much larger operation.

Meanwhile Lorenzo Dante has begun to grow weary of his life in organised crime and frustrated with his violent and impulsive younger brother Cappi. While the police net begins to close in on him, Dante meets the beautiful Nora, who exerts a powerful pull over the gangster.

As Kinsey’s enquiries reach a dramatic head, it becomes clear that she and Dante have one thing in common – they must be careful who they trust . . .

I love Kinsey Millhone. But she's not everyone's cup of tea. I started reading the Alphabet series a few years ago - I think at the time it was up to O is for Outlaw. The idea of a mystery series each title beginning with a new letter amused me. I don't know why. I don't think it's particularly original. At least - I've seen a few others since. At the time though it was new to me and it just struck me as perfect. I flew through the series. Kinsey is riveting. She's brash and harsh and charming. She's fierce and flawed. She gets scared. She holds her own. She pushes herself to run often and tackles cases without judgement and with an open mind. Rosie and Henry are brilliant and I love the little family she builds around her.

But Kinsey Millhone isn't Jack Reacher - her speed is more Tracy Crosswhite. [b:My Sister's Grave|22341263|My Sister's Grave (Tracy Crosswhite, #1)|Robert Dugoni|https://i.gr-assets.com/images/S/compressed.photo.goodreads.com/books/1405267054l/22341263._SY75_.jpg|41739579] Her cases aren't full of action and high speed chases - they're slowly nitpicking away until something clicks into place. She writes down all her thoughts and places her facts and ideas on 3x5 index cards - which she often shuffles and rearranges to help her solve her case. And I love it. Kinsey Millhone is great - but she's not for everyone.

For some reason I've seen reviewers compare this to Stephanie Plum - I don't know why - this is absolutely NOTHING like that. Stephanie Plum is a very different character and an extremely different type of book. That's more fluff. Kinsey Millhone is more procedural mysteries. And this series isn't current - it was first published in the 80's - there's not really technology. Messages were relayed by calling the landlines. Paper files were still the main form of storage. Not everyone will enjoy reading this. But if you like your mysteries to be more like procedurals with a determined and fierce character - Kinsey Millhone is for you.


This was a bit slow to get into but once I had it was fantastic. Diana Alvarez from the previous book (she's the sister of Michael) makes an appearance - she's just as annoying as she was in that one. Henry phones in a few times. Rosie and William make their usual appearances - although Kinsey also goes with William to a funeral - you know, his favourite thing to do. The best appearance though was from Pinky Ford - the guy who gifted Kinsey with her first set of lockpicks and showed her how to use them. Aww. He was the best. He was definitely the loveable rascal Kinsey painted him as - although I was sad for him that his partner, Dodie dies. I also really liked the villain in this, Dante and I totally guessed where Nora fit into everything. Although I was actually disappointed by that in the end - I rather liked Dante and I liked the idea of him and Nora being happy. I mean they were anyway but I would've liked them to be happy without the death of her son hanging over it. I loved Nora's plans for revenge - her husband is cheating on her with the secretary and taking her to events - but worse, the secretary is wearing her clothes - so Nora goes to the other house and picks up all the clothes right before they have an event. Lol genius. Plus she tells the husband she sent over someone else to pick up the stuff, so he doesn't think she knows. The mystery was interesting and as usual, Kinsey's inner commentary had me amused.