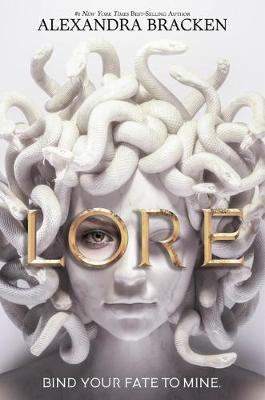 From the #1 New York Times best-selling author of The Darkest Minds comes a sweepingly ambitious, high-octane tale of power, destiny, love, and redemption.

Every seven years, the Agon begins. As punishment for a past rebellion, nine Greek gods are forced to walk the earth as mortals. They are hunted by the descendants of ancient bloodlines, all eager to kill a god and seize their divine power and immortality.

Long ago, Lore Perseous fled that brutal world, turning her back on the hunt's promises of eternal glory after her family was murdered by a rival line. For years she's pushed away any thought of revenge against the man-now a god-responsible for their deaths.

Yet as the next hunt dawns over New York City, two participants seek her out: Castor, a childhood friend Lore believed to be dead, and Athena, one of the last of the original gods, now gravely wounded.

The goddess offers an alliance against their mutual enemy and a way to leave the Agon behind forever. But Lore's decision to rejoin the hunt, binding her fate to Athena's, will come at a deadly cost-and it may not be enough to stop the rise of a new god with the power to bring humanity to its knees.

"Monsters lived in the shadows. To hunt them, you couldn’t be afraid to follow. And the only way to destroy them was to have the sharper teeth and the darker heart."

Lore is one of those few books where you don’t see the twists coming and a plot that is genuinely different! It’s also an incredibly violent book where these families have clung to some really insane outdated traditions to maintain power. The angle with Tidebringer was really interesting, but it was also weird to see how the families treated women.

I did have a problem with how I wasn’t really invested in any of the characters because besides Castor and Lore you don’t really explore any of the other relationships Lore has, we’re just told that these are deep and meaningful but not shown. I did see the romance and I wish the author had done something different with that.

However, the authors writing sucks you in and you kinda just start reading! Yes, there are quite a few names at the start, but I don’t feel like it’s too much information. The twist that we get at the end is one that you really aren’t prepared for because all the signs that could have been pointing towards this could have been that character just being who they are (and they are a bit of an ass).

Lore is a (Greek) mythology mash-up with a sort of Percy Jackson meets Hunger Games vibe, reimagined by Alexandra Bracken. Released 5th January 2021 by Disney, it's 480 pages (print edition) and is available in hardcover, audio, and ebook formats. It's worth noting that the ebook format has a handy interactive table of contents as well as interactive links and references throughout. I've really become enamored of ebooks with interactive formats.

This is, admittedly, a very well written book. The author is adept at her craft and the world building and characterizations, the narrative arc and the dramatic tension are engagingly rendered and believable. It took quite a long time for me to read and review this book not because of any technical defect, lack of editing (superlative editing and continuity for what it's worth), but simply because this is a brutal book. I thought it would be fairly safe since it was marketed as a Disney YA selection, but *wow* it's violent. Trigger warning: there is graphic violence, torture, rape, graphic murder, etc. Every time I would pick it up, I would wind up putting it down again because I was distressed at the gore and violence.

Readers who don't mind fighting and gore with a side serving of angsty angry young heroines will find a lot to like here. Readers who are well immured to hardcore ancient Greek tragedy a la Euripides, Aeschylus, and the other boys in the band, but who are looking for modern retellings will enjoy this one.

Three and a half stars for me, likely four+ for readers who don't mind violence. (It's not egregious, it is integral to the story).

Disclosure: I received an ARC at no cost from the author/publisher for review purposes.
3.95(?) stars. There were a few things that did bother me in this book. Way more than what I’m mentioning here (won’t spoil). The story seemed to fall apart once the *big revelation* happened. Idk I think I would’ve been fine without an element of shock? This would’ve been far better as NA/Adult. Far. Better. It’s just crazy to believe these kids had skills like that at the age of 10. Otherwise, this was a very unique story with a WHOLE LOT OF ACTION (was never bored); and Lore, Athena, and Iro were just the best.
Star Rating: —> 4-4.5 Stars

SO MANY THINGS RUNNING THROUGH MY HEAD RN !

There's an endless amount of things I could say here...

But for now, this is all my brain is willing to spare! Enjoy my immediate thoughts

I received this book for free from Netgalley in exchange for an honest review. This does not affect my opinion of the book or the content of my review.

Lore Perseous attempts to flee her past only for it to come full circle in this sorta young adult romance.

Lore was rage personified. While she had moments of clarity and insight, the majority of the novel focuses on her inability to look beyond her own volatile emotions and her misguided impulsive actions. She goes down a rabbit hole of her own making, but eventually pulls herself out of her own self-destructive cycle. I didn’t particularly like her most of the time, but I did respect Lore’s journey into the darkest part of herself and eventual redemption.

The world-building was utterly confusing. Someone with a knowledge of Greek mythology will probably not be nearly as confused by all of the houses, gods, and mythos packed into it. Violence, gore, and sexual assault all make an appearance – I’m amazed this is not being marketed as New Adult rather than Young Adult. While several romances develop over the course of the novel, the true romance is the setting. New York is written about in loving detail, whether it be the trash on the street or the indomitable spirit of the people.

It does have two positives – it’s a standalone and that book cover is on point!

tl;dr While I may not have loved the story, I did respect Lore’s journey into the darkest part of herself and eventual redemption.