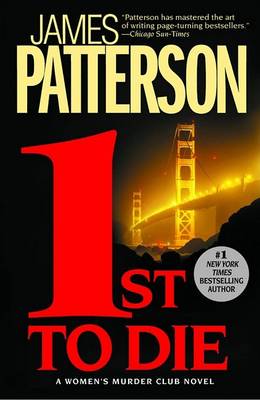 As the only woman homicide inspector in San Francisco, Lindsay Boxer has to be tough. But nothing she has seen prepares her for the horror of the honeymoon murders, when a brutal maniac begins viciously slaughtering newlywed couples on their wedding nights. Lindsay is sickened by the deaths, but her determination to bring the murderer to justice is threatened by her own personal tragedy. So she turns to Claire, a leading coroner, Cindy, a journalist and Jill, a top attorney, for help with both her crises, and the Women's Murder Club is born.

I read this book over 8 years ago and recently reread it again.
I love the suspense and plot twists! I will be reading my way through the Women's Murder Club series.
Having only read James Patterson's YA Maximum Ride series, this was my first foray into his adult work. I was a little apprehensive as, while I like crime, I'm not a fan of thrillers. However, I really enjoyed it and now can't wait to read the next one in the series.
I love the idea of the Woman's Murder Club and the way they all joined together with their expertise to save the day.
This is the first book in the series and I really liked it. It's such a great start to a new series and I liked the plot and overall feeling of the book.
It was a nice easy read. This was my first James Patterson book and i have to say I enjoyed it. There are a series of murders of brides and grooms and Lindsay Boxer is the homicide detective. She befriends a journalist, a D.A. and with her longtime friend, whose a medical examiner, they start the women's murder club. They all have a piece of the puzzle and together they solve this case which has a little twist.
I have been watching the very short lived TV series based on these novels and have been really enjoying it, so I thought I'd check out the books it was based on. I have to say that I really enjoyed this book, it was an easy read with a nice twist at the end. The characters were likable and well developed and the plot is fast passed and has some of the shortest chapters I have ever seen in a book! lol I'll definitely be checking out the others in this series....
I found this one very enjoyable, the first book in this series. The characters are interesting and engaging and just when you think you have everything worked out he throws something new at you. The twists kept me going.
Someone is killing newely weds and in order to solve the mystery four women band together, a detective, a journalist, a lawyer and a coroner.