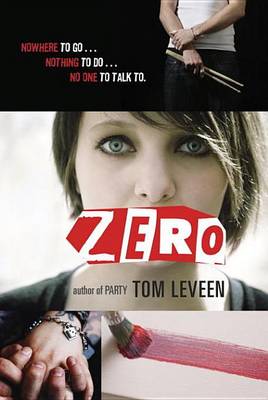 After graduating from a Phoenix, Arizona, high school, aspiring artist Amanda "Zero" Walsh unexpectedly begins a relationship with a drummer in a punk rock band, which helps her come to terms with her feelings about herself, her falling out with her best friend, and her parents' personal problems.

Meet Zero. She’s an aspiring artist. Unfortunately, her lack of self-confidence (and lots of family drama) prevents her from going after her dream: to attend a prestigious art school in Chicago. It’s supposed to be Zero’s fun, laid-back summer before college. Instead, she’s stuck at home with one less friend, living in a house where her parents never stop arguing.

Alright, let me admit it: when I first found out that I was going to be an Ambuzzador for ZERO by Tom Leveen, I thought, “Uh-oh… This is not the kind of contemporary that I read.” And, I’m not going to lie; it’s true. I like sweet, romantic contemporaries and the cover does not give that impression at all. It looks edgy and punk rock and not me. But I was determined to give ZERO by Tom Leveen a shot. And this is one of those cases where I shouldn’t have judged a book based on its cover.

Amanda, a.k.a Zero was a tough protagonist to like based on first impressions. Zero has a pretty abrasive personality and it took me a while to find something about her that I could relate to. At first I couldn’t help thinking, Geez, what a Negative Nancy! Amanda was really overly critical and cynical about almost everything. But once I learned more about her, I understood why she acts that way. After a while, I related immensely with Amanda. Every now and then, a girl feels self-conscious about her body. It’s really only with time that a girl comes to love herself. Furthermore, I really could relate with Amanda’s frustrations with the college system. It is unbelievably expensive nowadays and it’s terrible how the cost of education can prevent one from going after their dream.

Music plays a huge role in ZERO by Tom Leveen. Unfortunately, I’m pretty much the complete opposite of an audiophile. As much as I would have loved to relate with the whole punk rock scene, it just didn’t happen. I wanted to get into the music as much as Zero did but for someone who isn’t into music as much, I think it’s hard to imagine being part of the audience of a concert. There are so many mentions of different bands in ZERO by Tom Leveen and my music knowledge is so limited that I couldn’t tell if they were real or fake bands. (I never really did find out…) However, I do think it would have been awesome to have actually heard some of the songs that Tom Leveen had written for the book.

Furthermore, there is a pretty realistic romance in ZERO by Tom Leveen. Mike is pretty likeable and I think he is one of the things that was key for Amanda’s character development. His encouragement to push her to follow her dreams as well as his own passion for his music really helps prioritizes Amanda’s goals in the near future.

ZERO by Tom Leveen also touches on a little bit of LGBTQ issues in the form of Amanda’s best friend. Initially, I thought Amanda was homophobic, but after I kept on reading I thought her reaction to be quite normal. It doesn’t matter if Jenn is straight or gay. If it had been me and one of my friends (guy or girl) I think I would have been freaked out at first if I really didn’t see it coming. I’m glad how their friendship developed in the book.

Lastly, art is essential to the book. If you’re not familiar with Salvador Dali, or have never even heard of him, go look him up on Wikipedia before reading ZERO by Tom Leveen. I think it’s important for a reader to at least be familiar with some of the works that inspire Amanda so much in the book.

While I enjoyed reading ZERO by Tom Leveen quite a bit, I think what makes this book different from a four-star book is memorability. I just don’t think that ZERO by Tom Leveen will leave a lasting impression on me, despite the fact that I liked reading it. The ending of ZERO by Tom Leveen was perfect. I couldn’t have been more satisfied with Amanda and I was really glad on how much she had matured over the course of the book.

I would recommend ZERO by Tom Leveen to readers who love contemporary novels – especially those about art and/or music.