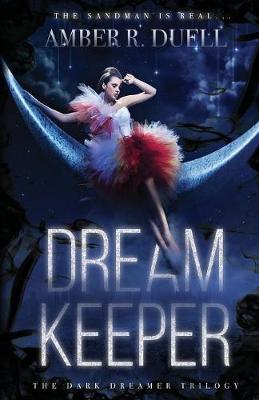 I received this book for free from the YA Bound Book Tours in exchange for an honest review. This does not affect my opinion of the book or the content of my review.

The Sandman is real!?

Dream Keeper by Amber R. Duell is a spectacular and surprising read.  Nora and the Sandman are complex individuals who find love in the land of Dreams. However, when Nora’s dreams spill into the real world, things get messy.

Nora is young, and she has been hiding part of her from everyone in her life but the Sandman. He is her confidant and an imaginary friend even though he is real to her, no one in her world believes he exists. Nora doesn’t talk about the Sandman because when she does, her family makes her see doctors.

I liked that Nora was willing to risk everything for the ones that she loves. I thought that it was really great to see Nora with friends and family. You could see that even though she spent time in the dream world every night, she has a life in the real world too. However, Nora is impulsive and naïve. She puts herself at risk when waiting even a few hours could be all the difference.

Sandman aka Ben, is magical. He represents all the light or good in our dreams. Sandman is also noble, but not perfect. He started this mess by containing the Dream Weaver, but not thinking it through. Then he was so obsessed with protecting Nora after making her the Dream Keeper that he forgot what his enemy was capable of.

I liked that Sandman protected Nora and that he came to the real word to do so. I also think the description of him with the violet eyes and the moving tattoos is so marvelous. I can totally see him in my mind. One thing that I don’t like about the Sandman is that he didn’t fully trust Nora. Yes, he gave her the dream to keep and believed that she keep it, but he didn’t trust her enough to tell her everything that she needed to know. He also didn’t act his age and yet I kind of got that. Sandman really didn’t have much contact with humans other than the children who believed in him.

Dream Keeper by Amber R. Duell a fabulous fantasy. I loved the way she was able to take the old Sandman stories and bring them to life with an updated feel. This dark fantasy does have a couple of horribly gory descriptive scenes, but nothing like Stephen King novels.

Anyways until the next time enjoy this review brought to you by,