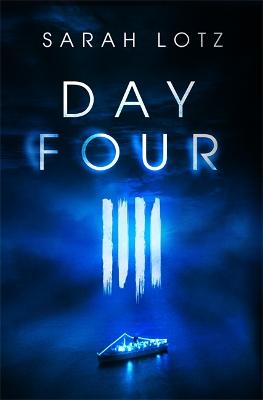 The trip of their dreams becomes the holiday of their nightmares: DAY FOUR is Sarah Lotz's extraordinary, unmissable follow-up to the book that made headlines around the world, THE THREE - perfect for fans of The Shining Girls, The Passage and Lost.

Four days into a five day singles cruise on the Gulf of Mexico, the ageing ship Beautiful Dreamer stops dead in the water. With no electricity and no cellular signals, the passengers and crew have no way to call for help. But everyone is certain that rescue teams will come looking for them soon. All they have to do is wait.

That is, until the toilets stop working and the food begins to run out. When the body of a woman is discovered in her cabin the passengers start to panic. There's a murderer on board the Beautiful Dreamer... and maybe something worse.

From my AP review: ... A swiftly spreading virus? Check. Broken engines that stall the ship beyond cellphone range? Check. A rowdy bunch of hard-partying Brits who might get everyone cut off from the booze? Yes. There's also a psychic who's really a scam artist, and a storm's on the way.

And then things get worse, as in end-of-the-world worse. It all goes down off the coast of Florida, because where else would the apocalypse strike? If that's what is even happening to the cruise ship The Beautiful Dreamer. ... It's when the cruise ship drifts into supernatural waters that "Day Four" stalls, mired like "The Three" in too many possible explanations for the horrors.

If it's the journey and not the destination that matters, then "Day Four" is a fun excursion. A voyage into hell, though, should actually end somewhere.

Read more at: http://apne.ws/1LhtyiP
I enjoyed Sarah Lotz's first in this horror series, The Three, but was not blown away by it. I did have fun reading it however, and was intrigued enough to want to know how the story would continue. Did this book fulfil that need? No, not particularly. But was it good? Yes, a resounding yes!

I felt that the plot and writing in Day Four was much stronger than it had been in The Three. This could in part be due to the fact that Lotz focuses on writing flowing prose, rather than the found documents approach she took in the last book. As such the characters were believable, they were likeable in their own way, and the reader gets a real sense of dread with what is happening. It left just enough to the imagination to retain suspense all the way through, and is so descriptive that I got a real sense of the sights, sounds, smells and the general claustrophobic feel of the characters' experiences.

While I felt that Lotz' documentary style in the first book could have been stronger, I did however miss it in this book. She is obviously a strong writer, and I think keeping the style going over the series would have been a bonus. It was not the style that was difficult in The Three, I just didn't think the writing was as strong. With the strength of the prose that comes across in Day Four I think it would have been served well with the same documentary style. As a consequence Day Four felt like a completely different book and not at all part of the same series as The Three. Not until the very end did Lotz take on that same found documents approach, and it was absolutely fantastic! In the last few pages it really lived up to the originality of The Three.


As a sequel this novel didn't do a lot, but standing alone I thought it was a great read. I'll definitely be looking forward to whatever the next novel in the series will be. I certainly hope there is one, and I hope it ties together the overarching story a bit more.